A handful of new faces on the Berlin podium 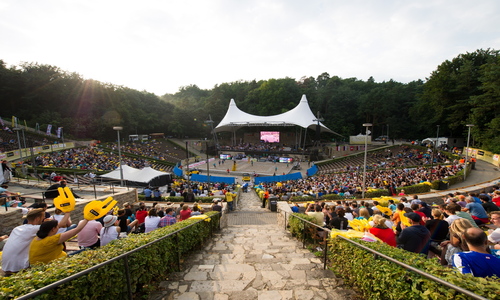 The beach volleyball week in the German capital could be considered everything else but boring. In one of the most favourites-free Grand Slam in the history of the World Tour, where the top seeds had been knocked out much before the fun started, the Brazilian rookies Vitor Felipe and Evandro Goncalves went through the qualification bracket to eventually grab their first gold medals as seniors.

The surprises did not finish with the appearance of the new Brazilian heroes in the final. There they met another not less spectacular team that only made its debut in Berlin. The Russians Konstantin Semenov and Vyacheslav Krasilnikov had to pair up after the European Championship in Klagenfurt due to the reoccurring health problems of Yaroslav Koshkarev. Krasilnikov, having finished third at the domestic Anapa Open behind the winners Semenov-Koshkarev, turned out to be a great defensive match to the attack height of the 208-cm-tall Russian blocker.

In one of the most interesting finals this season and surely one of the most physically dominated in years, Russian beach volleyball school opposed the stars of the new Brazilian generation. Semenov and his seldom matched dimensions faced the 210 centimeters of Evandro. Great kills, impressive block skills, powerful jump serves and nimble digs pursued the whole three sets in the clash of tomorrow’s powerhouses. It was, in my opinion, a very refreshing experience to see some new faces posing with the medals and, thus, gradually preparing us for the change of guards. A 21-23, 21-13, 15-10 win marked the debut podium finish of Vitor Felipe and Evandro. 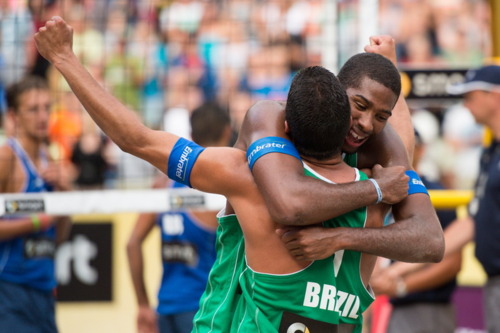 The victory might’ve actually come a lot easier had Konstantin Semenov not made a run of good serves, including an ace, at the end of the opener.

“I can’t believe it,” Vitor Felipe said. “I’ve never stood on top of a podium before, be it FIVB or the Brazilian Tour or anywhere and now I’ve won gold.” Howsoever, Vitor Felipe got famous for a series of silver and bronze finishes at Junior World Championships, but it was indeed a special moment for him to be on top in Germany. 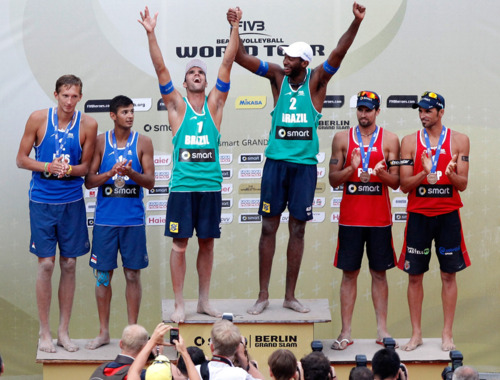 We predicted quite correct that the momentum of the matadors Herrera-Gavira, following their Euro title, will bring them some more joy prior to the season finale. Being the only team with a richer background in the Berlin final four, the Spaniards took bronze by winning in two sets (21-19, 21-16) against the absolute Italian sensations Andrea Tomatis and Alex Ranghieri. Beating their previous best finish (a fifth in Long Beach, California) and dwelling otherwise in the shade of Italy’s number one Nicolai-Lupo, the veteran Tomatis (35) and his 26-year-old partner Ranghieri enjoyed the week of their lives as they sent home the Latvian favourites Smedins-Samoilovs on Friday afternoon on the way to reaching Saturday’s internationally televised matches.