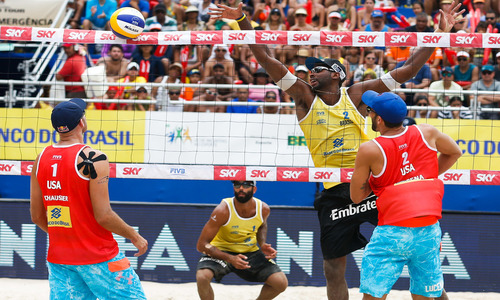 The Maceio Open, the second stop in 2016 and the first of three consecutive World Tour events in Brazil, had been slowly turning into a Brazilian beach volleyball feast when a US duo crashed the party. Lucena-Dalhausser, the only non-Brazilian team in the semifinals, were the twosome no one could beat last week.

You could say it was another classic final between USA and Brazil on Sunday at noon local time. Yellow was the color that variegated the central court on Pajucara Beach and it was quite naturally so, given the fact that Brazilian pairs enjoyed a great tournament overall.

The coastal city of Maceio made its debut as a World Tour organizer and it will stay as a sweet place to remember for the veterans Nick Lucena and Phil Dalhausser. With a combined age of 72, the two yankees must be feeling as young as never before. The reason is very simple from a spectators’ perspective – this was their seventh final in eight tournaments since they announced their partnership in the middle of 2015! They missed the podium only once last season at the Olsztyn Grand Slam in Poland. The gold medals at the Maceio Open was the third pair they grab on those seven occasions, having previously stepped on the highest podium place at the Opens in Xiamen, China, and Puerto Vallarta, Mexico. And I will just add that Nicholas Lucena, albeit a highly respected and decorated athlete, had never won gold in the World Tour before joining forces with his college friend Dalhausser. 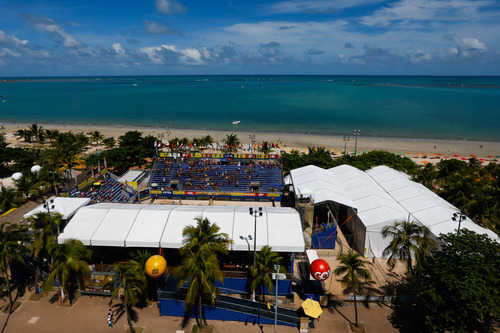 The final encounter was very balanced and it could have easily gotten in favour of Evandro-Pedro had Lucena and Dalhausser lost concentration at the end of the tie-break. The two tandems exchanged a set each, both 21-19, and then the Americans took a comfortable three-point cushion at 12-9 in the decider to hamper the ambitions of their rivals.

“It was a great crowd today,” added Lucena. “Evandro and Pedro are very tough to beat, especially in front of their home fans. It was hot out there today, so it was whoever could withstand the heat and humidity.”

Pedro-Evandro have been one of the most solidly performing teams in the Tour and their appearance at the first-place match consolidates this statement. The bronze medallists from the 2015 World Championship in the Netherlands have never finished out of top 10 in any of the events they have participated at since they established their partnership at the end of 2014. Unfortunately, they could only win the Stavanger Major in 2015.

When the first-seeded team meets the second-seeded for the gold you might say the tournament has gone without major upsets. The bronze medal match was an all-Brazilian affair but the names that shone as winners were less known for the wide audience. Volleycountry readers, however, should already be familiar with the two boys that earned their second podium since they teamed up back in 2015 – Saymon-Guto. The 22-year-old coevals stunned the reigning world champions Alison-Bruno for the bronze medals at the Rio Open last season and now they added another bronze set to their collection by snatching the win in straight sets (21-18, 25-23) against Alvaro Filho-Vitor Felipe. Moreover, you might even remember Gustavo Carvalhaes, nicknamed Guto, from the 2013 U21 and 2014 U23 World Championships in Umag, Croatia, and Myslowice, Poland, respectively. Guto performed with his previous partner Allison Francioni back then and returned home with the gold medals in 2013, whereas a year later the two cariocas won the consolation third-place battle in Poland.

We can realistically state that the future of Brazilian beach volleyball was on display in that penultimate match in Maceio. On one side of the net we had Saymon-Guto, both 22, on the other – Alvaro Filho, 23, and Vitor Felipe, 24. There is surely a lot more on the World Tour for these four players. What’s curious about the twosome Alvaro Filho-Vitor Felipe, participants at last year’s World Championship in the Netherlands where they reached the quarterfinals and vice-champions from the Junior World Championships in Blackpool, Great Britain, in 2009 and Alanya, Turkey, in 2010, is that this fourth place was the best they have achieved on the Tour.

Beach volleyball gets a week of rest before moving to the host of the Olympics Rio de Janeiro and the first Grand Slam of 2016. Most Olympic aspirants are expected to arrive to Copacabana in chase of rankings points and, for some, first serious challenges for the new campaign.