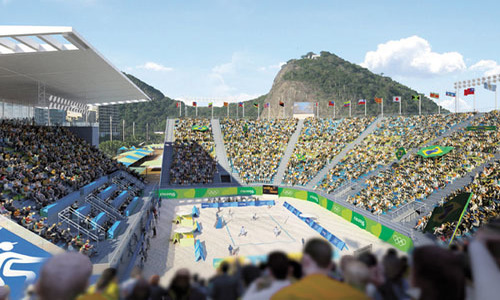 The 2016 part of the 2015-2016 beach volleyball season will commence three weeks later than originally anticipated. FIVB had to change the premier’s international beach volley event’s calendar again and thus to adjust the sequence of tournaments.

That three events from the end of the 2015 World Tour, namely the Opens in Puerto Vallarta (Mexico), Antalya (Turkey), and Doha (Qatar), actually those that were scheduled after the World Tour Finals in Fort Lauderdale, USA, will be included in the 2016 season has already been announced well in advance. The fourth event, in this case, of the 2015-2016 campaign and first for the new year will begin on February 15. The opener, apart from the early date, is also unusual – Iran and its trim Kish Island will make their World Tour debut. Never before has the Tour visited Iran.

The action-packed and intense year, and expectedly so due to the Olympics taking place in Rio de Janeiro between 5 – 21 August, had been planned to start in Brazil at the end of January already, but the Vitoria Open has been moved to the middle of March, right after the season’s first Grand Slam in Rio. Yes, correct, the first of two major sports events related to beach volleyball that will take place in the Brazilian Mecca in 2016. This is actually a good decision by the board as then January could be used for further pre-season preparation by players. Also, this way players could stay longer in Brazil as the World Tour will feature three consecutive stops there. The Rio Grand Slam and the Vitoria Open will be preceded by the Maceio Open at the end of February, just after the actions in Iran will have been over.

Kish Island and Maceio won’t be the only locations making their debut on the international beach volleyball stage. After a year of absence, Germany returns as an organizer and this time with a new venue. Hamburg, the country’s northern port, will welcome a Grand Slam at the beginning of June (7 – 12 June), just after the European Championship in Biel/Bienne. In the middle of May we are going to have another World Tour debut. USA’s Cincinnati will organize an Open.

Olsztyn has been named once more as the Grand Slam host in Poland, whereas Long Beach will be the venue for the last Grand Slam days after the closing ceremony at the Olympics. The ultimate stage which will receive the 2016 World Tour Finals at the end of October has not been clarified yet, thus being the only, for now, question mark.

You can find the FIVB’s updated official calendar here.

The return of the age-group World Championships

2016 also registers the return of the age-group World Championships which we last watched in 2014. Two years ago the competitions gave opportunities to many young players to compete at a top-drawer event.

One of the most anticipated events in the Olympic programme in Rio de Janeiro, beach volleyball is rumoured to suffer from a reduced number of spectators. An iconic new 12000 seater venue is expected to welcome the world’s supreme beach volleyballers and the organizers claim to be hopeful of sellout crowds throughout the tournament. Although just a rumour right now, the information about eventual structural problems is mainly linked to the Games’ fragile budget and the host country’s worst recession in years.