Despite missing a World Tour medal together (both Emanuel and Alison won medals already with different partners), the 2012 Olympic silver medalists enjoy quite some success in the new 2013-2014 season of the domestic Circuito Banco do Brasil.

Emanuel-Alison extended their lead in the Brazilian internal beach volleyball tour as they won its fourth leg in Guaruja. Having previously finished first in Recife, second in Rio de Janeiro and third in Vitoria, the ranking leaders gained some recently lost confidence prior to the last international event of the year – the Durban Open in South Africa. The conclusive African tournament will be available on bwin for the betting enthusiasts.

“It is tough to maintain your consistency on the circuit because there are a lot of good teams, but that is our aim,” Alison said. “I feel stronger working every day with Emanuel, who is the Pele of our sport and a great friend. Despite his age he is still playing at a high level and I’m the one who has the privilege of playing alongside him.”

The best male beach volleyball team in Asia for 2013 comes from Kazakhstan. The top-seeded Alexey Sidorenko and Alexandr Dyachenko did not even drop a set during the Asian Championship in Wuhan, China. A 21-11, 21-17 win in the final against Thailand’s Sukto-Sangkhachot brought the first-ever title for the former USSR member, ceasing the dominance of Indonesia, China and Australia in the continental tournaments (with 4, 3, and 2 titles respectively). Sidorenko-Dyachenko are finishing 2013 in a great fashion, as they are currently ranked 9th in the FIVB Season Ranking and are now deservedly crowned as Asia’s best. China’s Ha Likejiang and Li Jian grabbed the bronze in Wuhan ahead of another Kazakh couple, Alexey Kuleshov and Dmitriy Yakovlev. 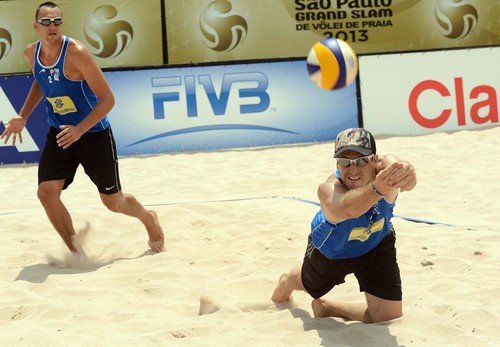 It’s been a short and quiet season for the 2012 Olympic and 2009 World champion Julius Brink from Germany. Plagued by a series of injuries following his London triumph, in addition to the retirement of his partner Jonas Reckermann, Brink entered only four official tournaments in 2013. He and partner Sebastian Fuchs finished fifth at the Shanghai Grand Slam, a position repeated in the domestic German Tour in Munster. However, a 25th place in Corrientes, Argentina, and a 17th one in Fuzhou, China, can be considered nothing less than disappointing for the 31-year-old defensive specialist.

Brink’s recent decision to pair up with the 23-year-old Armin Dollinger is not solely based on results. “Together (with Fuchs) we finished fifth in the Grand Slam in Shanghai. One must not forget that, in addition to Erdmann and Matysik’s third-place finish at the World Championship, we had the best result for Germany in 2013. It was not a decision I took based on one single reason.” And he is also full of admiration for his new teammate saying, “I think that in Germany there hasn’t been a blocker, who was so good at his age. Armin is a great talent and a hell of a smart guy.”