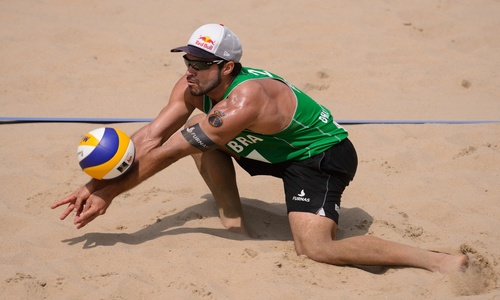 A defensive specialist grabbed the largest number of awards at the end of a spectacular season. Otherwise dominated by powerful giants, beach volleyball is still a game where a versatile defender, like the Brazilian Bruno Oscar Schmidt, could make a difference with his presence.

2015 did not start in a way the Team of the Year, Alison Cerutti and Bruno, had anticipated. The twosome skipped the first several events on the international circuit and only made their debut at the Moscow Grand Slam where they missed the medals by a whisker. And then came the highlights of the season – the World Championship in the Netherlands. Struggling at this juncture, Alison-Bruno qualified for the tournament as the third best Brazilian team but left The Hague with the title ten days later. The final against the home favourites Nummerdor-Varenhorst was by far, in my opinion, the match of the year. This triumph opened the floodgates and the newly crowned world champions won five of the next seven events on the Tour in which they took part. One of the gold medals was at the inaugural Swatch World Tour Finals in Fort Lauderdale. This incredible run saw them rise to the top of the 2015 World Tour and earn the first Olympic berth.

“It is a season to remember,” said the 29-year-old Bruno, who won the Most Outstanding Player, Best Defensive Player, Best Offensive Player, and Sportsman honours. “After placing fourth in Moscow at the end May, we really struggled in the next three events in Croatia (17th in Porec), Norway (9th in Stavanger) and the United States (9th in St. Petersburg). But we did not panic and knew we were close to putting our game together to compete at the highest level.”

There were few surprises among the nominees for the individual season awards. Alison Cerutti, one of the game’s most iconic players, grabbed only the Best Blocker accolade this time. Phil Dalhausser was named the Tour’s Best Setter for the second time in a row and sixth overall in the last eleven years. The Italian defender Adrian Carambula is the Top Rookie of 2015 absolutely deservedly due to his charisma and unconventional sky serves. The tall and powerful attackers Christiaan Varenhorst (Netherlands) and Evandro Goncalves (Brazil) were named the Best Hitter and Best Server respectively, whereas a Mexican appears for the first time in these individual rankings. Lombardo Ontiveros, a finalist at the Antalya Open and winner of the Pan Am Games alongside Juan Virgen, is the Most Improved Player.