From youth to senior supremacy 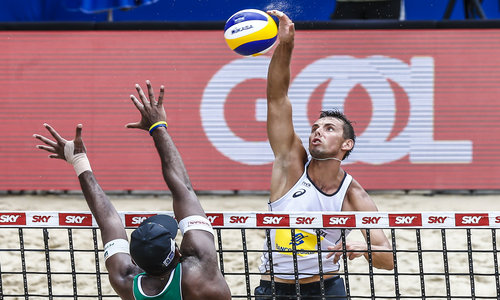 We’ve written several times already in our junior and senior beach volleyball reports about the talented youngsters. The Poles had been attracting attention ever since they elevated themselves to one of the most promising junior twosomes out there and this season they, alongside Brazil’s Saymon-Guto, are surely the most improved tandem in the World Tour. Losiak-Kantor had previously reached a final at the Stavanger Major in 2015, which they lost to Pedro-Evandro, but now they stepped on the highest podium place for the first time as part of the men’s circuit.

The Polish victory could have hardly been any more dulcet. Losiak-Kantor were the top seeds in the qualification round and they had to overcome two teams, Julio-Ahmed from Qatar and Kildegaard/Abell from Denmark, to enter the Main Draw. In the preliminary Pool G they won all their games, including a hard-fought 2-1 win against the reigning European champions Samoilovs-Smedins from Latvia, and went on in the same fashion as they finished the Grand Slam unbeaten. En route to the gold medal game, Losiak-Kantor scalped Lucena-Dalhausser in the quarterfinals and countrymen Fijalek-Prudel in the semifinals. Not a bad run for a 23-seeded team, right? The best they saved for last, however.

If it is not rewarding enough to play on Copacabana in Rio de Janeiro – one of the most iconic beaches that exist, and in an Olympic year on said location in addition to that, and to win that tournament, then it could only get perfect if you challenge and beat the very same team that had defeated you in your only final appearance so far. Losiak-Kantor faced the home favourites Pedro-Evandro (Pedro Salgado was born in Rio de Janeiro) in front of Brazilian fans and withheld from giving up. It ended with a 2-0 win for the Polish youngsters but it was not easy in any single moment of that final (21-19, 23-21). 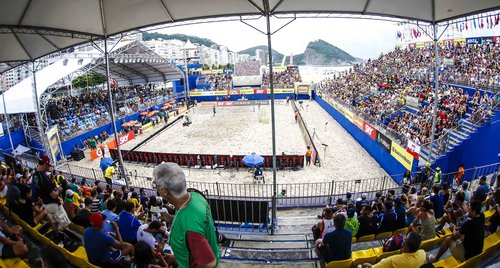 “The young Polish guys are the most improved team on the Tour and played very well today,” said Pedro Salgado. “They were more calm this time as compared to Norway when I think they were really nervous in their first final. They were steady throughout and did not lose their focus.”

The Poles have started the 2016 more than impressively with a bronze-medal finish at the Kish Island Open, the season opener, followed by a quarterfinal position in Maceio two weeks before erupting in Rio. This will seriously increase their chance to fight for an eventual second Polish berth for the Games in August. Pedro-Evandro have already secured the coveted second and last Brazilian quota for the Olympiad, but will have to work hard on improving their finals ratio as the defeat to Losiak-Kantor has been the second in a row in 2016, following the lost final in Maceio against Lucena-Dalhausser. Medallist from several international events, including bronze medallist from the 2015 World Championship in the Netherlands, Pedro-Evandro’s only title together has been achieved in Stavanger last year.

With two teams in the semifinals, Poland had already been guaranteed a medal. As a matter of fact, the Rio Grand Slam was the third event (after the 2015 Stavanger Major and this year’s Kish Island Open) when Poland have qualified two teams in the semifinals. And Losiak-Kantor’s triumph was Poland’s second in the history of the World Tour, with Fijalek-Prudel opening that account by winning The Hague Open in 2014. Unfortunately, Grzegorz Fijalek and Mariusz Prudel left Copacabana empty-handed as they succumbed to the 5th-seeded former world champions Alexander Brouwer and Robert Meeuwsen from the Netherlands for the bronze medals. Brouwer-Meeuwsen had last appeared at the Puerto Vallarta Open last year where they finished second, so they must be delighted to find themselves again on the podium. Fijalek-Prudel’s last top three finish was in Stavanger last year.

As already announced in a separate article last week, the great Emanuel played his last competitive tournament at the Grand Slam. Parallel to following the men’s actions, spectators watched closely the legendary Emanuel Rego once last time as he was playing his ultimate sets. He and his partner Ricardo Costa scored two wins in Pool B and a defeat to Fijalek-Prudel on the opening day meant that the two Brazilians would have to enter the draw for Round 1. It turned out to be Emanuel’s last match. The Chilean cousins Esteban and Marco Grimalt prevailed in three sets over Ricardo-Emanuel and put an end to Emanuel’s opulent career. It was not the story-book ending everyone hoped for. After the setback and with “Obrigado Emanuel” on the video board, Rego addressed the crowd and thanked every family, friend, and fan in attendance. 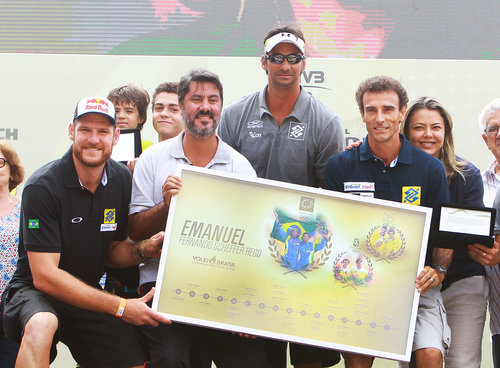