Gold for Latvia at the inaugural European Games 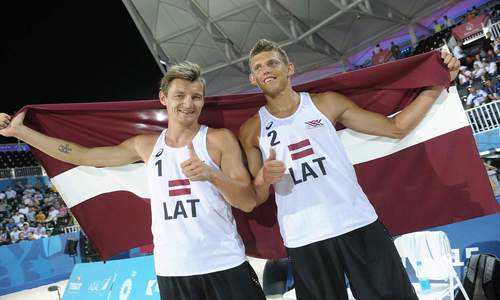 Three years after the historic bronze medals at the Olympic Games in London and numerous titles at the FIVB World Tour, Latvia wrote another eminent page in their beach volleyball record book. One of the heroes from London in 2012, Martins Plavins, and his less known but nevertheless very talented partner Haralds Regza grabbed the gold medals at the first-ever European Games in Baku, Azerbaijan.

The advent of the European Games in the middle of the already cram-full summer programme of athletes from different disciplines has been widely discussed in the recent two weeks. It is a busy summer for volleyball and beach volleyball players as well, with various and far more important competitions in terms of Olympic points and rankings around the corner. Many discussions have been commenced regarding the purpose of the Games and whether they make sense at all when top athletes (in our case indoor and outdoor volleyball players) choose to compete elsewhere. However, scheduled to happen once every four years, this event is an invaluable opportunity for younger athletes to step up and I firmly consider their creation mostly positive for European nations. I do not want to say we could not have lived without the Games, but it is another occasion to enjoy our favourite game as part of an olympiad. The lower level of competition compensated with much passion and drama, and those who chose to follow the actions in Baku were surely not disappointed.

The beach volleyball tournament, as a team event, made no exception in terms of star players choosing to not participate. Last week’s St. Petersburg Grand Slam in Florida, USA, a stop of the 2015 World Tour, gathered much more attention instead. Similar to World Tour’s Opens, however, teams with lower seeds in the international ranking enjoyed the spotlight, as well as Azerbaijan’s perfect organization, splendid courts, and hot weather. 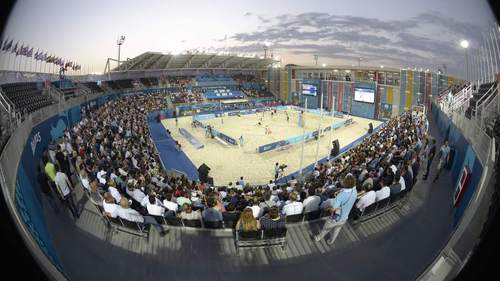 Latvia had earned two men’s quotas, with team Plavins-Regza exclusively paired up for the Games. The 30-year-old Martins Plavins plays with Hermans Egleskalns as of 2015, whereas the 22-year-old Haralds Regza, standing at 197 cm, regularly competes alongside Armands Abolins. Plavins-Regza defeated the Russians Dmitry Barsouk and Yaroslav Koshkarev in three sets (21-16, 18-21, 15-10) in an entertaining final on Sunday, thus closing the actions on the sand and winning also the only gold medal for the Baltic country so far in Azerbaijan. The two teams took turns in demonstrating their skills in the match, with the first and the decisive third set going in favour of the Latvians, while Barsouk-Koshkarev tied up the score at 1-1, but were unlucky in the first few points of the tie-break.

“It is just amazing,” Plavins commented being interviewed right after the end of the final. “We did not have any special plan for this match,” he joked. “Actually yes, we had worked on our tactics for the final and we stuck to our game plan and I am happy it worked just fine in the end. We fought for every single point, the more since this was a close and tough match like any other final. We played a great tournament. The most critical situation was when we played Azerbaijan (Santos-Rudykh in Round 2) and the match lasted for three sets. If we had not won that match I don’t know how this campaign would have ended. This is a great experience and I hope that Azerbaijan can organize some more Beach Volleyball tournaments in the future.”

Another team specially formed for the 2015 Games, Alexei Strasser and Gabriel Kissling from Switzerland, finished a step behind the podium. The bronze medals went in Czech hands and the pair that grabbed them is an interesting blend of experience and youth. Premysl Kubala, a 41-year-old former indoor national team member, and Jan Hadrava, 24, prevailed over G. Kissling-Strasser in straight sets (21-17, 21-15).

“This is like a dream that came true. We were very determined and really wanted this medal. Our initial strategy was to serve at number two. But then we decided to change and to focus on number one and that was very successful,” the veteran Kubala said. “I finally made it and could win an international medal. This tournament meant a lot to me and now I can finish my career with a nice feeling. But nevertheless I still would like to try to qualify for Rio 2016. As far as our celebrations are concerned, we must let this sink in first. We only had plans on how to play this game, we had no plans at all for what was going to follow next.”