Home rebound for the world champions 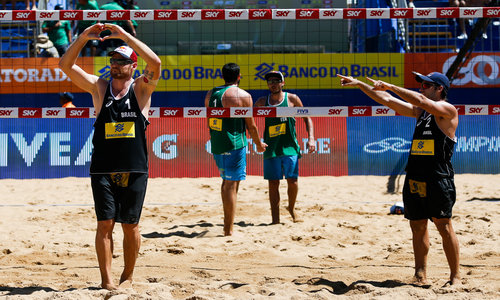 It could not get any better for the audience in Vitoria when their home-grown compatriot Alison Cerutti and his teammate Bruno Oscar Schmidt raised hands triumphantly after the last point of the final match on Sunday.

Returning to the metropolitan city of Vitoria, Brazil, for the first time since 2006, the FIVB World Tour completed a month of events in the country that will host the 2016 Summer Olympics in August. Following the Maceio Open at the end of February and the season’s first Grand Slam in Rio de Janeiro last week, the Vitoria Open, last won by the Germans Julius Brink and Christoph Dieckmann ten years ago, had the honour to welcome beach volleyball’s elite once again.

Born near the Camburi beach which hosted the Vitoria Open, Alison Cerutti and his partner Bruno came back on winning terms after their outburst since the middle of the 2015 season. The Rio Grand Slam was the twosome’s first international tournament since dominating at the 2015 Swatch World Tour Finals in Fort Lauderdale at the beginning of October. Alison-Bruno were knocked out there in the quarterfinals by the 2013 world champions Brouwer-Meeuwsen from the Netherlands. After such an early exit and using the chance to play in front of family and friends in Vitoria, Alison and Bruno were very impressive at the Open and reminded of their last year’s form as they finished unbeaten and dropped only a single set (the very first set they played in the event against the Russians Barsouk-Lyamin in the preliminary Pool A). The slow start at the Rio Grand Slam did not disturb the reigning planetary champions, who won the Natal stop of the domestic Circuito Banco do Brasil at the end of February, as they opened the throttles and quickly adjusted their game to the more challenging international tour.

“This is a great day for us to win a gold medal match,” said Bruno after the match. “With Alison being raised here and me now living in the area, we had a lot of family, friends, and fans cheering us on this week. It is also a good week for us after finishing a disappointing fifth last time in Rio. As the Rio event was our first, we just weren’t prepared for the high-level play by the international teams. This week our performance was much better.” 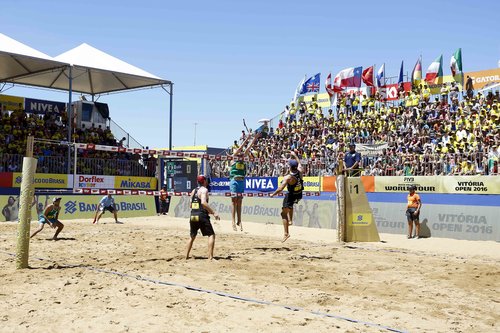 The Brazilians practically left no chance for their Italian opposition Paolo Nicolai and Daniele Lupo in the gold medal encounter. The first set was won with a stunning margin (21-13) and it seemed like everything was in favour of the home heroes. Bruno started the match with brilliant digs in defence which he immediately converted in points afterward. Alison joined the party shortly after that with two blocks and a kill and the cariocas exterminated any drama there could have been in the first set. The second set was more balanced, Nicolai-Lupo got used to the scorching sun as the match started to look like a final, but it was again Alison-Bruno who snatched the victory (21-18).

The silver medals has been a significant improvement for Nicolai-Lupo after the 17th-place finish in Rio. The two Italians had last appeared on the podium in Sochi, Russia, when they claimed bronze.

With two Italian teams in the semifinals, “squadra azzurra” marked an important milestone en route to collection Olympic qualification points. Ranghieri-Carambula had to surrender to Alison-Bruno on Saturday evening and then they failed to make the weekend more Italian than ever by losing the bronze medal match against Brouwer-Meeuwsen (18-21, 15-21). It was the second consecutive bronze medal position for the Dutchmen who have also reached the semifinals in the last four events in which they have taken part. This is certainly a positive sign for the stars from Stare Jablonki from almost three years ago.

Meanwhile, the legendary Ricardo Alex Costa Santos, or just Ricardo, will be looking for a new partner. The 41-year-old offensive specialist teamed up with his friend Emanuel Rego in order for the latter to experience his last beach volleyball moments. In Vitoria, Ricardo played alongside his ex-teammate Alvaro Filho as the two were knocked out in the Round 2 by countrymen Saymon-Guto. Alvaro Filho will continue his partnership with Vitor Felipe, leaving Ricardo with some question marks before the next event.

The World Tour leaves Brazil after almost a month as athletes will now enjoy a short break. The Doha Open in Qatar will be the next venue at the beginning of April.