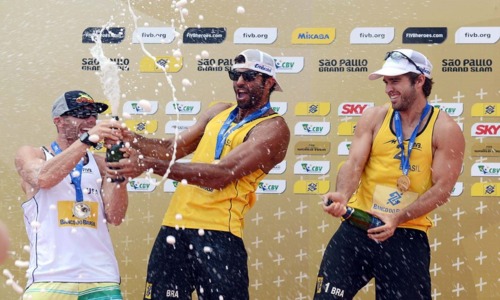 Enjoying the best beach volleyball of their careers, Pedro Salgado and Bruno Oscar Schmidt claimed another major event title as they won the home Sao Paulo Grand Slam on Sunday. It was the second trophy for the current second-best team in the world rankings after the Brazilians triumphed at The Hague Grand Slam in the Netherlands earlier this year.

In a rematch of the preliminary Pool B clash against the newly formed American team Dalhausser-Jennings, Pedro-Bruno again needed three sets to grab the gold medals. This time, however, the sets were all extremely balanced (23-21, 19-21, 15-13) and comprised of dramatic rallies till the very end. An hour was not enough for either team to step forward victorious and in the end, much to the home crowd’s delirium, it was Pedro Salgado and Bruno Oscar Schmidt to close the decider in their favour. 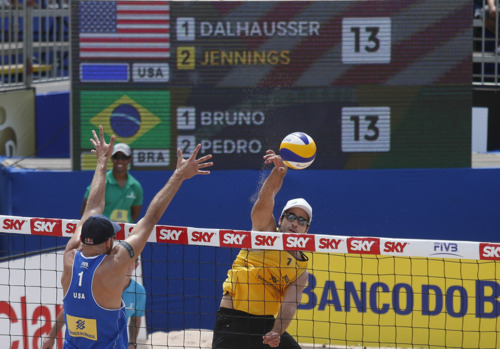 Pedro said after the exhausting match: “I am so excited. It was a special Sunday for me. Playing against Casey in the final was a dream for me. He is one of my best friends, part of my family. He and Phil make a very competitive team. I am so happy to win this title at home.”

Phil Dalhausser and Casey Jennings turned out to be the pleasant surprise of the tournament as they entered the Grand Slam being ranked only 18th. Dalhausser’s regular partner Sean Rosenthal got injured the week prior to the tournament in Brazil’s biggest metropolis, as well as the eighth largest city in the world, so it was a nice opportunity for the veteran Casey Jennings, thirty-eight years of age, to step up. Appearing in only their first event together, Dalhausser-Jennings made it all the way to the final and were really close to the gold medals, finishing a position below the top with a couple of game points short.

The bronze medal encounter met two of Europe’s best teams. The current surprising, but well-deserved World Tour ranking leaders Janis Smedins and Aleksandrs Samoilovs from Latvia edged the Spanish matadors Pablo Herrera and Adrian Gavira in straight sets (21-14, 21-12). The bronze medals was the sixth pair of distinction for the Latvians throughout the season and, moreover, allowed them to preserve their lead over the chasing Brazilians Pedro-Bruno shortly before the Tour finale. Herrera-Gavira, on the other side, have made a remarkable progress since the 2013 World Championships in Stare Jablonki, adding a European Championship win in Klagenfurt at the end of the summer. 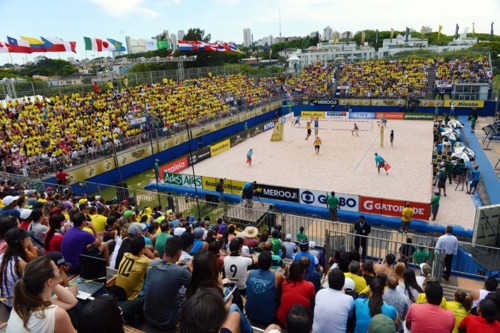 There will be one more stop of the 2013 World Tour before we know the name of the new season winner. FIVB had to adjust several times the beach volleyball’s premier series calendar due to conflicting events. Uganda’s Kampala Open and now India’s Vizag Open have been dropped, the latter because of the local turmoils. Next week the last Grand Slam will be held in Xiamen, where it all started for the international beach volleyball season in 2013 – namely in China back in April. The event in Xiamen was originally scheduled as a single-gender one only (female), but recent updates made FIVB reconsider.