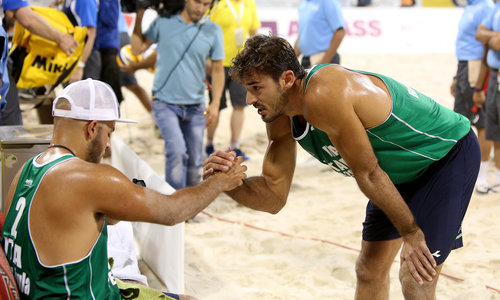 The Italians Alex Ranghieri and Adrian Carambula have moved up in the provisional Olympic ranking following their first gold medal in 2016 at the Doha Open in Qatar.

The World Tour arrived in the Qatari capital just six months after the Open’s 2015 edition took place on the same location. Due to the new Olympic format, however, both events will be counted towards the 2016 season. The Germans Markus Böckermann and Lars Flüggen took the title in November, thus making it two in a row for their country in Qatar, following the surprising triumph of Holler-Schröder back in 2014. The dominance of Europeans, caused to a certain extent by the absence of some North and South American pairs, continued for another year at the Doha Open.

The final was an all-European affair. Ranghieri-Carambula, one of the most attractive and non-standard teams on the Tour, completed a perfect record of seven straight wins to grab their second pair of gold medals as a team. Challenging them for the title were the 21st-seeded Austrian surprise package Huber-Seidl who appeared in their first-ever gold medal match in the World Tour. 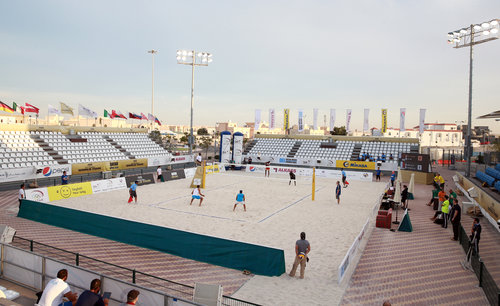 I expected the Austrians, who are not less experienced than their Italian opponents, to be a bit nervous in their first senior international final but that was not the case at all. Alexander Huber and Robin Seidl have participated on the world stage together since 2009 and have waited long for that moment. The Austrians started both sets against Ranghieri-Carambula energetically and showed no signs of worry. They compensate for the lack of height and power (the blocker Seidl stands at 190 cm, whereas the defender Huber is one of the shortest on the Tour with his 179 cm) with some nice technique and good defence. Ranghieri-Carambula gradually improved their performance throughout the final, however, and made life difficult for the Austrians. Surprisingly, it was the offensive specialist Robin Seidl whose rhythm was first broken. He got targeted by Carambula’s sky serves and Ranghieri’s excellent floats and had to attack a lot in order to keep his team in the game. A sequence of vague attacks, saved by Adrian Carambula, and some stuff blocks by Alex Ranghieri saw Huber-Seidl trail towards the end of both parts and eventually lose the final (17-21, 19-21).

On the other side of the net were the Italians who made one of their best performances since the two joined forces at the beginning of 2015. Alex Ranghieri, a former indoor middle blocker (the typical indoor technique he applies could be easily seen when you watch him approach the net), is surely one of the best blockers on the international stage. His float serves are also worth mentioning. Ranghieri-Carambula are one of the few teams on the Tour that practice attacks directly after the second ball touch – a quality that helps to distract opponents, confuse opposing blockers, and reduce any possible pressure from the receiving player. Notable are also Adrian Carambula’s quick attacks from the middle of the net – something that became popular some years ago and a trick that goes in favour of technical, short defenders.

This was the second win for the Italians after their first-place finish at last year’s Antalya Open in Turkey. Ranghieri-Carambula are reigning European vice-champions and, based on their recent form, game, and results, I am sure one of the teams that will make it to the Games in Rio in August. The 30-year-old Alexander Huber and the 26-year-old Robin Seidl had previously finished third at the Fuzhou Open and fourth at The Hague Grand Slam, both in 2013.

Two tandems that we recently wrote about were protagonists in the bronze medal encounter. Defending champions in Doha, Böckermann-Flüggen had to leave Qatar without a medal this time due to health problems. Lars Flüggen suffered from an injury that prevented the Germans from ending the semifinal battle against Huber-Seidl and from entering the court against the Poles Losiak-Kantor. Winners of the Rio de Janeiro Grand Slam, the Poles are one of the twosomes in best shape out there and lost only once in Doha – in the semifinal against the eventual winners Ranghieri-Carambula.