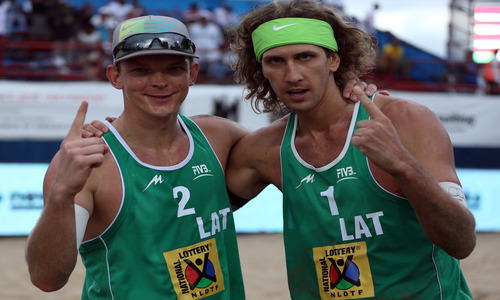 The 2013 mid-December weekend and the South African city of Durban, the third largest in the country after Johannesburg and Cape Town, are always going to put the small Baltic republic of Latvia in mind of their golden beach volleyballers. In an all-Latvian final on Saturday, Janis Smedins and Aleksandrs Samoilovs finished their season campaign in a perfect fashion, taking home two titles – the Durban Open and the 2013 FIVB World Tour ones.

The original program of the final FIVB event for 2013, held in memory of the former South African president Nelson Mandela, listed the men’s final on Sunday, December 15th. Due to the collision with the end of the 10-day mourning period, the organizers set the men’s medal games on Saturday. As the tournament was scheduled late in 2013, at the end of a long season, a lot of familiar faces and favourites did not even arrive in Durban. However, as namely the last Open would reveal the new World Tour winners, the Latvians Smedins-Samoilovs and the Brazilians Pedro-Bruno, still in the title race, were hoping of a pre-Christmas miracle.

The European vice-champions had been completely aware of the mathematical calculations, according to which a quarterfinal berth would crown them as the Tour’s leaders, regardless of the finish of the two Brazilians. Hence, Smedins-Samoilovs played very carefully all week long and eventually made it to the last 8 after besting France’s Andy Ces and Edouard Rowlandson in slightly more than half an hour (21-12, 21-12).

The Latvians finished their South African adventure as true champions, nevertheless. They went unbeaten all the way to the big final, knocking out their main rivals Pedro-Bruno in the semis in straight sets (28-26, 21-14). In an all-Latvian final, that was actually a repetition of their earlier preliminary Pool C encounter, Smedins-Samoilovs beat once again their compatriots Martin Plavins and Aleksandrs Solovejs (15-21, 21-17, 15-10). For the latter this has been the greatest result ever together, adding some more glory to Plavins’ Olympic bronze finish in London with his former partner and today’s opponent Janis Smedins.

Plavins: “For my partner this is only his third main draw. We are happy that we won all the matches we could. In the pool we lost against our guys, they are number one right now. For us there was a small chance we would reach the final and we did not disappoint. For the Latvian history it is great that we play against Latvia in an FIVB final. I don’t know when that is going to happen again.” 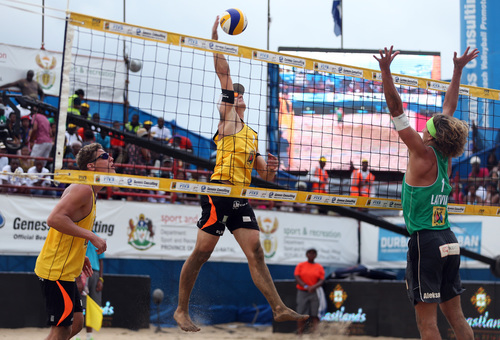 Gold and silver in the last event in 2013, a World Tour title, two Grand Slams won, Olympic bronze last year in London, silver at the European Championship – all recent achievements of Latvian male teams show how seriously these lads work. It would not be an overstatement to say that this is probably the most rapidly developing beach volleyball nation in the world right now.

A consolation bronze medal podium finish in Durban mark the season finale for Pedro-Bruno. The Brazilians won the opening set 21-17 before Premysl Kubala, a former indoor Czech international player, had to forfeit due to a muscle injury.

“The Latvians played amazingly in the semifinal”, Bruno Oscar Schmidt said. “Smedins served like fire, so they deserve the title, they deserved the final. But I am walking away here with my head up. We have had an excellent year.”