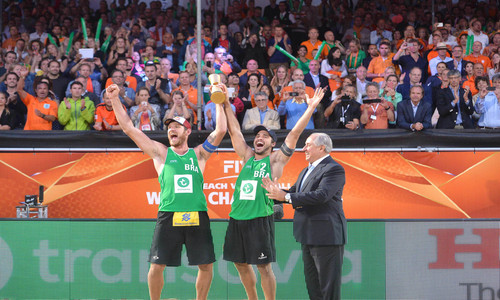 The Dutch crowd at the stadium on the floating pontoon on the Hofvijver in The Hague were already expecting a huge party when their favourites, their top-seeded compatriots Reinder Nummerdor and Christiaan Varenhorst, were just a point away from the World Championship title on a number of occasions on Sunday evening. However, the Brazilians Alison Cerutti and Bruno Oscar Schmidt killed the ambiance just a few seconds later after Alison’s tip turned out impossible for Nummerdor to defend.

In probably the best beach volleyball final I have ever watched in my life, Brazil and the Netherlands gave the world another reason to adore this game. The mesmerizing gold medal match of the tenth World Championship was the absolute showcase of ten amazing days in four Dutch cities. I am not an experienced journalist and I find it hard to put into a single article the influence this final match had on me, but I guess even dean journalists and bloggers struggled to depict what they witnessed on Sunday in writing. If you watched the international live stream, you would certainly remember how the commentator ran out of superlatives even before the night’s apogee settled on the court.

For the second time in history we had a Brazil vs. Holland final in the men’s competition. The first encounter was two years ago, at the last premier event, when Brouwer-Meeuwsen brought a historic title for the Netherlands in Stare Jablonki against Ricardo-Alvaro Filho. Brazilian players had scored fluctuating and often disappointing results on the international stage ever since, but the most successful beach volleyball nation glowed vividly throughout the 2015 World Championship and eventually grabbed five out of six medals overall, including the female tournament. 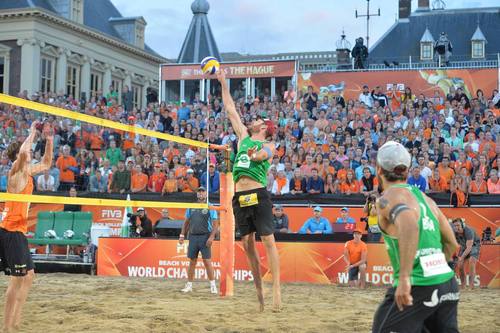 Rarely before had we seen such a balanced gold medal match. The victory could’ve easily gone either way and it would surely be equally deserved had the crown remained in Holland. Boosted by the fans in orange, Nummerdor-Varenhorst were on fire in the first set, started impressive the second one as well and even had a higher number of match points in the epic tie-break, none of which they could convert in the end. The opener was a dream for the Dutch pair. They did everything they were supposed to, executed a perfect tactical plan, whereas Christiaan Varenhorst’s six stuff blocks deeply questioned Alison Cerutti’s attack skills. ‘The mammoth’ kept on spiking hard in Varenhorst’s hands instead of using technique and soon the Dutchmen closed the set in an impressive fashion (21-12).

The second set started similarly which gave massive hopes to the crowd that the heirs of Brouwer-Meeuwsen, who had left the championship much earlier than anticipated, would come from the ‘low lands’ again. On any other day in any other tournament the situation might’ve been too tough to handle, but it was the World Championship’s final and Alison-Bruno definitely did not want to lose in straight sets without a fight. Alison slowly found the right game rhythm, the Brazilian quickly tied up the score at four each and had to find a way to break their opponents’ momentum. Varenhorst was enjoying a great evening and tournament overall, so the two cariocas started targeting the veteran Nummerdor instead. The only reasonable tactic they could exploit, this led to a series of mistakes for the former indoor national team player and soon the Brazilians, who had dropped only a set prior to the gold medal encounter (against the sensational duo Jefferson-Cherif from Qatar), were alive and getting increasingly dangerous after taking the second set (21-14).

The tie-break deserves a story on its own. Breathtaking rallies, changes of leadership, drama, emotions, and world-class beach volleyball were just a part of what happened on the court. The Dutchmen started more energetically and took a 5-2 lead thanks to the enthusiasm of the frenetic supporters. Then it was Bruno’s turn to shine. The defensive specialist attacked the highest number of balls in the decider and helped team Brazil come from behind to level at ten each. An ace by ‘the mammoth’ gave Brazil the first match point in the set at 14-13. Nummerdor-Varenhorst canceled it and went on converting their attacks to gain match points in their favour. The forty-second point of the tie-break was the crucial one. Unlike the unforced error he committed at 14-13, Alison was very careful with the tip this time and sent the Brazilian fans into frenzy (22-20). 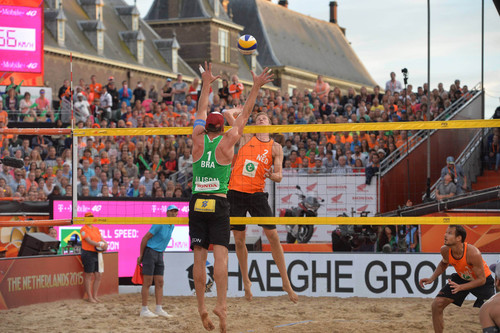 The happy Bruno Oscar Schmidt shared minutes after the match: “We were shaking from beginning to end. This makes it even more special. We were losing all the time in the tiebreak and we came back. That makes this even better.”

At the other side of the emotional spectrum was Reinder Nummerdor. “Maybe we hoped too much they would make a mistake. There was not a lot of difference, except that we were dominating in the first set. We had some big chances, and you have to take these chances in a final. This was one of the toughest losses in my career. And for sure also for Christiaan, but the whole week was amazing. It hurts like hell, but we really appreciate all the support.” Nummerdor also referred to the defeat at the 2012 London Olympics when he and his former partner Richard Schuil lost the bronze medal battle against Latvia’s Plavins-Smedins.

A piece of interesting statistics attracted our attention before the gold medal match. It was Alison’s fourth consecutive appearance in World Championship semifinals. The powerful blocker shared a title with Emanuel Rego back in 2011 in Rome and finished fourth with him two years ago in Stare Jablonki. In 2009 Alison grabbed silver with Harley Marques in Stavanger.

To make the medal ceremony even more Brazilian, destiny decided there will be another Brazilian pair on the men’s podium. Right before the final, Pedro-Evandro, the most consistently performing Brazilian duo this season, won the bronze medals against Lucena-Brunner from the USA. It was a weird tournament for Pedro Salgado and Evandro Goncalves as they barely made it out of the group stage where they lost twice. The championship practically started for them in the Round of 32. They went through a series of important wins to gain a semifinal spot. The Brazilians were a bit unlucky in the tie-break against Nummerdor-Varenhorst at noon on Sunday as the referee did not see the touch of Varenhorst’s block in the match point situation (21-18, 21-23, 15-12).

Two actual blockers, Pedro and Evandro took a perfect advantage of one of the two rotations to grab the bronze medals in straight sets. Evandro’s powerful serves generated tons of problems for the American reception, while Pedro demonstrated his block skills throughout the entire second set to eventually close the match in style (22-20, 21-13). An ace by Evandro was also the reason why Brazil took the opener in their favour. It was nevertheless a memorable tournament for the veteran Nick Lucena and Theodore Brunner who became the highest-ranked American team. The US tandem had already defeated Pedro-Evandro enroute to achieving bronze at the domestic St. Petersburg Grand Slam, part of the FIVB World Tour, just before the World Championship, but this time Lucena-Brunner could not find a place among the medal holders.

In our previous report last week, I mentioned the three underdog teams that earned a lot of media attention thanks to their surprising wins in Holland. One of these teams turned out to be the real discovery of the World Championship. The quarterfinal defeat of Qatar’s Jefferson-Cherif (0-2 against Lucena-Brunner (19-21, 19-21)) actually meant that their fifth place is the highest ever for the Asian country. The 20-year-old Younousse Cherif was one of the youngest players in the event and he was playing in only his fourth FIVB event.