Two novelties in beach volleyball in 2014 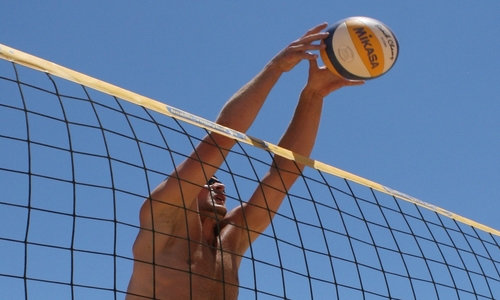 Following through on the FIVB Executive Committee’s long term vision to harmonize the rules of volleyball and beach volleyball, two major rule tests focusing on the block rule and the first hit in beach volleyball will be conducted in 2014.

The first test will study the use of the block rule (14.4), as currently used in volleyball, in all FIVB Beach Volleyball World Tour events in 2014. In this year’s FIVB Beach Volleyball Opens, Grand Slams and the Grand Slam Final a block will not be counted as a hit, allowing players a maximum of three hits (in addition to blocking) to return the ball. The existing rule 14.4.1 stipulated that a blocking contact is counted as a team hit.

The second test, which is focused on the first hit of the team, will take place at the FIVB Beach Volleyball U23 and U21 World Championships that will be held in Myslowice, Poland from June 10 to 15 and Larnaca, Cyprus from July 22 to 27 respectively. These two age-group World Championships were selected since the competition conditions are similar to that of senior level tournaments with many players at this age level also competing on the FIVB World Tour.

This ‘first hit’ test will study beach volleyball players’ use of the same first hit action in volleyball where players will be able to come in contact through overhand action with the fingers, as long as the ball rebounds immediately. In both cases, the tests will be used to gather scientific match data to study the impact on the game. Video analyses comparing relevant data from the current picture of the game against data retrieved from the tests will be used and the information analyzed according to gender.

The reports will be submitted to a group of FIVB experts to be nominated from the relevant FIVB Commissions for final recommendation to the Executive Committee followed by eventual submission to the 2014 World Congress that will take place in Milan, Italy from October 31 to November 1.