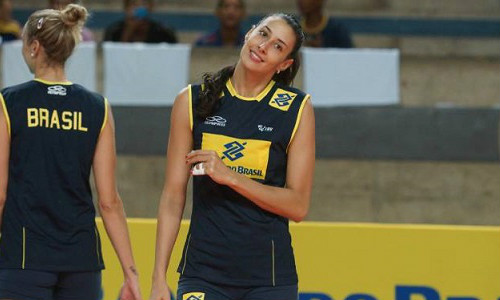 Usually when a tournament is over, the most outstanding players from different positions are selected by the official or the media to form a best team. It is a way to give an honor to their amazing performances. Let’s us review the dream team of women volleyball players of 2014.

Kim has been a stun in the past few years in the volleyball world. She is basically lifting the whole team of South Korea to compete with other strong teams. Without Kim, the level of Korea will be dropped dramatically. In my, probably in many people as well, opinion, Kim has the best all-round game. She has powerful spikes , the height to ensure blocking on top of the net, the various touching skills to create block out and avoid the hands of the opponents, the control of the ball to provide good reception, the defense that is better than average considering her 190 height. Although she didn’t participate in the World Championship, the most impressive match was in Grand Prix preliminary round against Russia, she depicts extremely well how her all-rounded skills help scoring 42 points in just 4 games even she was facing the terrific solid blocking from the Russian players. It’s a joy to see her play.

Kosheleva perhaps doesn’t have that incredible all round games of Kim but she uses her physical strength to make powerful and high spikes. Probably under the shadow of Gamova, Kosheleva doesn’t receive the attention that she deserves. Based on just the ability of spiking, she is arguably the strongest players in the world. Even without a proper setting or the ball is not in a good position, she still can adjust her spikes with her strong physical body. Look back on the World Championship; Gamova didn’t help the team much but Kosheleva’s solid spikes made Russia’s life much easier.

Zhu Ting received two awards best outside hitter and best Scorer in the World Championship. She is a young growing star for China. Her attack is phenomenal and probably other teams start to study her now.

Jaqueline’s balanced attack and defense strengthen Brazil’s domination in the world competitions. She is the most important outside hitter for Brazil at the moment.

What I admire Nootsara is she demonstrates what a short setter should be capable of. Before the representative was Yoshie Takeshita. Her technique is very exquisite and well-worked with the spikers especially with the middle blocker Pleumjit Thinkaow with her overback set. She covers her pass well causing confusion to the opponents. In the match between her club Rabita Baku and Dinamo Kazan, Tomkom stepped on the court and activated all the spikers which successfully helped the team to overcome Dinamo Kazan.

The World Championship has given us a chance to marvel Alisa Glass. Her exceptionally fast setting has provided the spikers a good timing to attack. Besides, she creates lots of one on one blocking for her spikers. Her performance in the match against Brazil and China was a main contributor to her team’s victory.

Wei and Aydemir both are smart in term of distributing the ball to different players. They are also capable of dealing with difficult pass.

Wth her 196 height and long arms, her blocking is a wall to everyone.  She is able to move side by side quickly and her hands are still above the net causing difficulties for the ball to go through. If you don’t destroy Brazil’s reception, Thaisa’s attack in the middle is nearly unbeatable.

Her blocking is also difficult to handle, the rebounds can really irritate the opponents. Apart from that, her efficient back slide attack is an arduous problem for all the teams.

Fabiana’s blocking is as dangerous as Thaísa and even better than Akinradewo. But I put Foluke above because her attack is a bit more impressive. However having Fabiana’s blocking together with Thaísa, Brazil is a nightmare to others.

What makes Rasic outstanding is she blocks in good timing which reminds us Simona Gioli. This helps much in her national team and her club Vakifbank.

Sheilla is still an irreplaceable opposite in Brazil. Her experiences helped her to overcome lots of difficulties. She is being known for her skillful attacking. No matter her performances in the 2014 WGP or 2014 WCH, her mental toughness is the key for her to keep starting the line as well as the main scoring force for Brazil especially she always step up to handle tough situation in crucial point.

We have seen Zeng’s spikes become more powerful and faster year by year and she keeps improving her skills. Her astonishing performance helped China to knock down Turkey in the 2014 WGP Final.

2m giant Diof is a new weapon for Italy. Her strong and high spikes in the position 2 and 4 are becoming dangerous for other teams.

She had been shinning for the past two years when her talents fully exposed to the volleyball fans. She predicts extremely well where the ball goes so she can have many unexpected digs on the court. In 2014 WCH, her reception and defense make it tougher for the opponents to score and Dominican Republic can barely enter the third stage if they don’t have Castillo playing.

Sano is the MVP of 2014 WGP where she also received the Best Libero award. She is 35 but she didn’t let her age affect her. She used her rich experiences and perfect skills to support the back row of team Japan. We have seen the performance of Japan in WCH without Sano, they faced a rigorous challenge of saving balls from the back row.