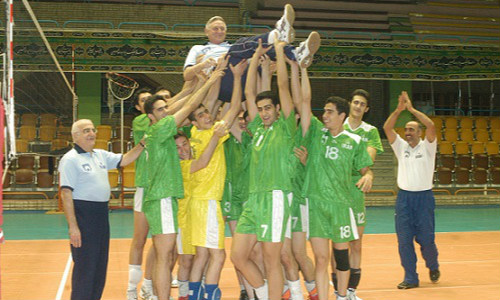 The first period of Iran league with the name of PASARGAD cup started in 1975 by ambition of Ebrahim NEMATI- the first international Referee. At that time Mr. Farhad MASOUDI was president of the volleyball federation.12 teams had participated in this championship. DOKHANIYAT team achieved champion title and the name of this team was recorded as the first champion and professional team of Iran. Two old sport magazines with the name of Donyaye Varzesh and Keyhan Varzeshi had good ideal attention on projection of league’s weekly activities. The year after league continued with the same number of participant teams, in that year Esteghlal became champion team. In 1978 by reaching the Islamic revolution to its climax, sport organization exposed to changes and volleyball league came to standstill.

During early years of the Islamic Revolution, under impression of the imposed war (Iraq invaded Iran on Sep22 1980 and it lasted until Aug 1988), and also there were successive changes on the level of presidents and board members in volleyball federation. Volleyball Programs and plans did not have stable form; more endeavors were paid on planning of the base of general and public sport.

International tournament of 10 days Fajr dawns (celebrating 10 days of Islamic Revolution Anniversary) each year was organized from 1986 till 2000. This tournament was one of the important events in the history of Iran volleyball. Organizing these tournaments put acceleration to progress speed of our country’s volleyball. Tournaments grew to a theme, attracted attention of clubs’ managers towards having a volleyball team. Then

In year 1989 the first elimination period of clubs championship during presidency of Parviz Khaki in volleyball federation took shape, Esteglal team by beating Neo-pan of Gonbad got the champion title. From 1987 – 1989 Mr. KHAKI was president, in this time league competitions were done on provincial form, and for 3 times Tehran team became champion.

In 1989 Hassan Ghouri Fard , chief of the Physical Education Organization nominated Mohammad Reza YAZDANI KHORRAM as the president of volleyball federation. Term of his service was from 1989 till 2006, the longest presidency in volleyball of Iran. So this period was dehiscent era of volleyball. Fundamental changes in structure of volleyball took place.Volleyball Super league under responsibility of Late Reza HEDAYATI sport teacher, Volleyball Referee and coach, with the name of Peace cup was set out. From that time volleyball entered into a new phase and day by day got progress. Fortunately Dr. Davarzani successor of Mr. Yazdani and the current president of Volleyball Federation continued the previous programs successfully. Each year there was variation in number of teams from 8 up to 14. Number of teams increased to 16and then rose to 18. Volleyball federation was the first federation which organized club championships under the name of Super league.Later other federations organized championships in this form.

Gradually after the imposed war management and planning settled down in sport and volleyball tournaments were organized throughout the country. In both aspects of quantity and quality matches were getting good shape in performance. Again dispatching Iranian teams to the international tournaments, inviting teams from other countries to Iran started. So volleyball stepped into a new period. When Mohammad Reza Yazdani Khorram got presidency of the volleyball federation, invited Ivan Bogaijekov the veteran master of Russian volleyball for coaching at national level in Iran. He came to Iran, by training new generation of coaches and players made a new transition in volleyball.

Now most of his students are distinguished coaches in Super league. Even some players who have learned or completed their alphabet of modern volleyball from with him are still playing in volleyball of Iran. As an example Fahrad Zarif and Mehdi Mahdavi are from those players, they were present in Modena of Italy in 2014. In 2001 in Cairo Farhad Zarif became the beset receiver of the World Youth Championship.

Ivan Bugajenkovs was born in February 18, 1938. At the moment he is citizen of Latvia. He is also a former volleyball player who competed for the Soviet Union team. In the  Summer Olympicsof Tokyo in1964 he won the gold medal. He played in all nine matches. Four years later he won his second gold medal with the Soviet Union team in the 1968 Summer Olympics  of Mexico City. In this Olympic tournament, he played in eight matches.

School by school, city by city all the time he was chasing to inspect the tall talented boys. He put down the foundation of modern volleyball in Iran with his systematic trainings. For many years, nearly 17 from 1991 to 2007, he had worked in Iran volleyball. Money and salary was not important to him, he was lover of Volleyball. If he was for money he had gone to neighboring countries for getting higher salary.

Last year Bugajenkov celebrated his seventy fifth birthday anniversary. At the moment he is living in RIGA, capital city of Latvia.

Since he was a well-known figure in volleyball many times he helped organizing mutual friendly matches between different national and club teams mostly between Iranian ones and Russian ones. Matches were organized in Iran or either in different cities of ex-Russian country. All of those friendly matches brought knowledge, style and experience to our players.

Mohammad Reza YAZDANI brought another great coach to Iran. He was Matsumoto a Japanese coach. From 1994 to 1998 he was head coach of senior national team. The 19th rank in FIVB men’s world championship After 28 years in 1998; and 4th and 6th rank of Asian games were his valuable achievements in that period for Iran volleyball. Then during the following years IRAN’s FIVB rank was fluctuated. In 1998 volleyball team of Iran was in preliminary round of the World Championship. Iran played versus Argentina, Cuba and Poland,in all of the matches Iran team was defeated by3-0.Just in one set Iran reached to point 9. The results were as below:

Comparing these results with recent results of Iran team in current year’s matches versus powerful teams shows the high level of Iran volleyball and its rapid progress.

Iran and Cuba during the decade of 1990 -1999 signed a mutual Economic- sport memorandum. So some Cuban coaches came to Iran. Miguel Lamot was one of those coaches .He was volleyball coach, served as the head coach of junior national men’s team. When he came to Iran the basic teams had worked well and progressed under management of Ivan Bugajenkov. Talented local coaches such as Mostafa KARKHANEH had brought high records for Iran volleyball. Ascending of junior and youth teams to the world championships was giving news from a bright future .But in this situation Lamot couldn’t have more affection and left Iran. He was not talkative and communicative person. He was not able to speak normal English so making communication for him was difficult. While he was serving as the head coach Karkhaneh the successful coach of basic teams was working along with him.