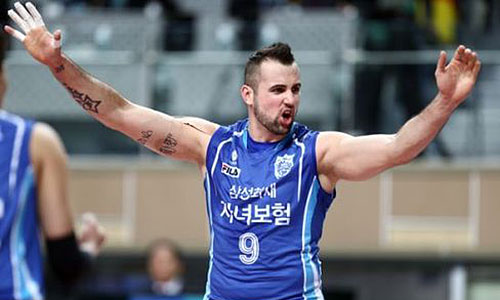 In this article I am going to highlight the highest scores, the league where those scores came from and which players did it the most frequently. The 2015-2016 for the Highest Scorers was 2nd Highest Season for Matches with players scoring 30 points or more with 342.

Only the 2014-2015 season was higher with 376 times. The highest score by one player was actually done twice by the same player, 48 by German Gyorgy Grozer of the Samsung Bluefangs (South Korean KOVO League). The first was against KB Starts on Oct. 29, 2015 and the second was against OK Savings on Nov. 18, 2015. Across the net Robertlandy Simon for OK Savings in that match scored 37, which would be the highest match between two players at 85 points. There were 17 times when a player scored 40 points or more and Grozer had 11 of them. Croatian Igor Omrcen playing for Toyota Gosei Trefuerza scored 47 in the Japanese Emperor’s Cup to finish 3rd in the top points scored in a match. He went over 40 points 4 times. Cuban Robertlandy Simon of OK Savings Rush & Cash (South Korean KOVO League) and Colton De Man of Canada playing for Tierp (Swedish League) were the other players to be in the 40 points range. Here is a chart of those with 40 points or more and the number of times with that score: 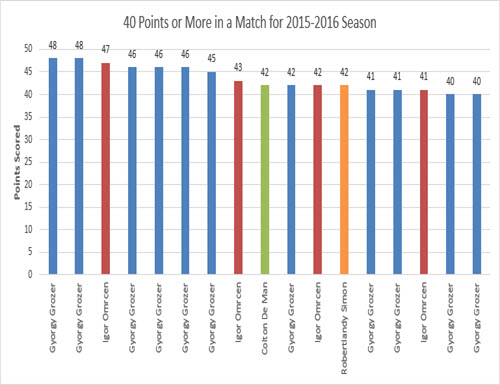 With little surprise to me the South Korean KOVO League was the league with the highest number scores with 30 points or more at 63. Japan’s V-League was second at 35. Both of these league have limits on the numbers of foreigners playing (only one player), so most teams try to set them more frequently as they are considered a “hired gun.” Actually, the 63 times was only the 3rd highest year in KOVO history with their 2014-2015 being the all-time record at 105 times. Here is a chart of the leading leagues around the world: 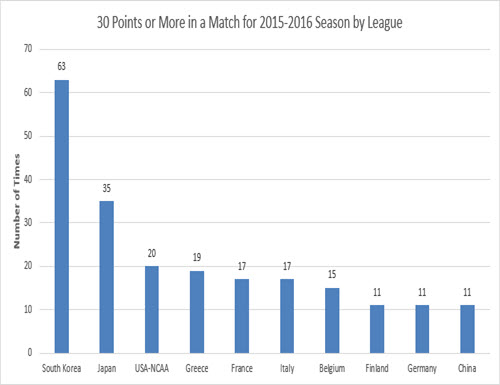 Moving to the players with the most matches over 30 points or more. Gyorgy Grozer was also the leader with 23 matches. Samsung played 39 matches, so in 59% of their matches Grozer scored 30 or more. Igor Omrcen and Jan Stokr of KEPCO Vixtrom (South Korean KOVO League) were tied for second with 12 times with 30 points or more. Here is a chart of the leading players around the world: 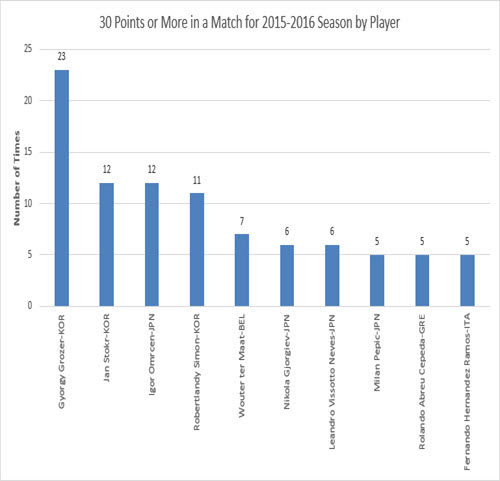 Next, which match was the highest scoring match in total points played? If a match went 25-23 for 4 sets and then 15-13 in the 5th set, you would have 220 points. Well this year there were 36 matches over 230 points. The match with the most points scored was a marathon 258 points between UPCN San Juan and Obras UDAP in Argentina’s ACLAV league on January 20th, 2016. This match had 3 sets go into extra points (30-28, 29-27 and 36-34). Both teams had 5 players score in double figures, only the setters and substitutes in single digits. Also impressive about the match was that it started at 10 pm at night and finished 2 hours 42 minutes later finishing on January 21st. The second placed match was 249 points between Chaumont and Ajaccio in the French LNV league on April 1st, 2016. Here is a chart of the highest scoring matches around the world: 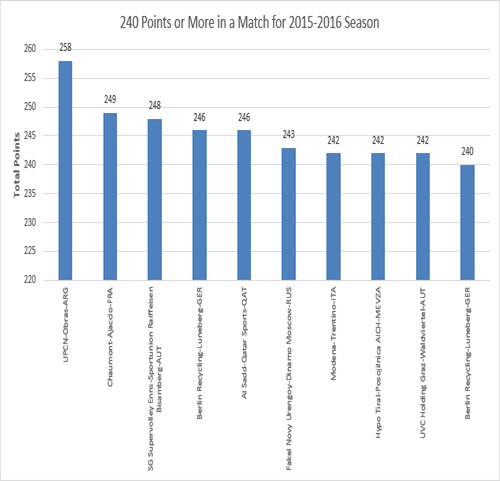 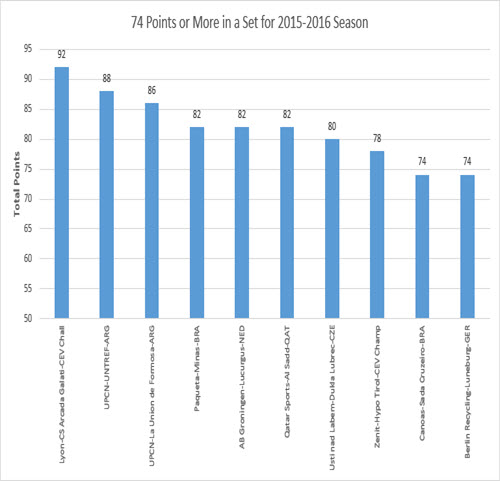