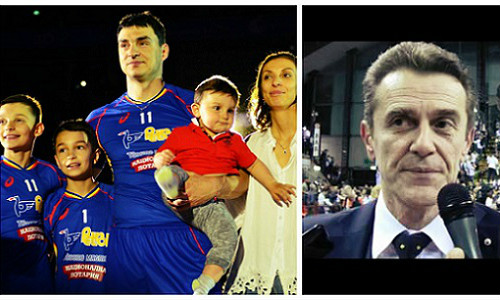 Yes, I am aware that this title could sound a bit strange.

But that’s its aim.

To provoke you. And me.

And I cannot stop watching some volleyball pics, videos of some spectacular events that happen this Sunday, 8th of May.  And while I am doing this, I am listening to the great Frank Sinatra and his My Way.  I am surrounded by my flat mates, they are talking to me. Yet, my head and my soul are not in Spain.

They are somewhere between Bulgaria and Italy.

Why? Here I will explain you.

This Sunday one of the biggest volleyball players of Bulgaria Vladimir Nikolov said Goodbye to the professional volleyball as a player. In a tribute match held in Arena Armeec (Sofia, Bul) in front of around 10 000 fans (as Bulgarian media reported) and among some of the best in the volleyball world – Vladimir Alekno, Hristo Zlatanov, Tsvetan Sokolov, Nikola Grbic, Camilo Placi etc. the ex-captain of Bulgaria played his last match. “The Stars” vs. Team Bulgaria. In a match named “My game”.

Now Nikolov has new challenges ahead of him – he is the new head coach of the Bulgarian men’s youth national team.

I want to write about the emotions.

I want to write about the tears we all saw (some saw them on live, others like me- hours later).  The family of Nikolov – his wonderful wife Maya and his three boys (two of them actually took part in the match J) supported him. There were many great moments – as hearing all the people repeating the name of the captain; as receiving hugs and gifts. But there were two that called my attention the most.

$-      Plamen Konstatinov and Vladimir Nikolov – as players they have never liked each other. And they admit it. But it’s great to see how volleyball power brought these two big men to a hug. Respecting each other. Konstantinov in a post interview said Vladimir gave so much to Bulgarian volleyball, he deserves all the love he receives.

$-    In the end. There were Vladimir and his family. He hugged his wife, kissed her; took their 10-month son into his arms; and accompanied by their two bigger kids , all the family left the sports hall. A metaphorical “Life goes on”.  If you have the right people around.

After 14 years the team of Modena won the Scudetto. Absolutely normal, players and staff were so happy.  And they deserve to be, plus they have done something that has been done only 3 times in the history of Italian volleyball – DHL Modena won this season the Supercup, the Cup of Italy and the Scudetto.

I couldn’t watch the whole match but I was back home for the interviews.

I couldn’t say a single word watching Angelo Lorenzetti going to his parents, giving them his medal.

I couldn’t say a singe word listening to his interview (ok, my Italian is not the best but I can understand what Italians say J) .

And most of all, I couldn’t say a single word seeing also this great man’s eyes –full of tears. Pure emotions.

Sometimes the best we can do is to be silent in order to show our respect and honor the big ones.

So, I want to be silent in order to honor Vladimir Nikolov and Angelo Lorenzetti. I want to keep my emotions silent and in the same time loudly talking using words. But I also want to thank them for reminding me that after all we are all human beings.

Human emotions on the volleyball field.

We, as journalist and fans, often forget that volleyball people, despite having a job that exposes them to the spot light, are just human beings. Such as we are. With their battles, their sufferings, their happy moments.

To all the volleyball people around there – famous or not, I wish you to stay human.

And to do things your way.

P.S. My Way is the favorite song of Vladimir Nikolov.

If you want your volleyball story to be shared on VolleyCountry, follow me on Twitter and write to me.