What´s going on in #TeamIran? Kovac in or Kovac out? 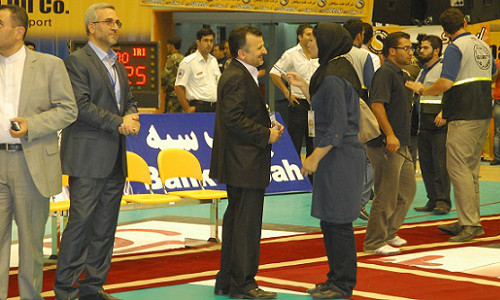 Prior the World Cup, Iran team participated in Wagner Memorial cup in Poland, and was defeated in 3 matches by Poland, Japan and France and finished on 4th place. Loss to Japan was a tickle that they are a serious rival for Iran  and they should be careful with them in the World Cup.

The World Cup games came to an end on 23th  of September. Now Iran has the 8th world rank in senior men’s ranking. Many fans and volleyball authorities here in Iran were optimistic as before and were expecting the Olympic ticket from the World Cup. But, it didn’t happen so. During this championship Iran team fell down to unpleasant losing strip. They got the 8th position among 12 participant teams. So we would wait once more till the qualification games of Japan. 4 wins in the World Cup were not sufficient, even Iran did not ascend to the 6th place. Iran had lost to Australia and Canada; in the latest FIVB ranking they have 13th and 11th ranks in the world. The teams of Tunisia, Venezuela, Japan and Egypt, were defeated by Iran team, respectively their FIVB ranks are 16, 26, 14 and   17.  (According to the latest FIVB ranking announced in September 2015)

Experts and veteran players had given their views regarding the performances of Iran team in the World Cup. You can read some of them below:

Iraj Mozaffari said: “What Kovac had as a preparation plan for the team is wrong. After Wagner cup he should not go to the Russian camp and not take a tired and spent team to the World Cup. When the body is tired it is highly probable for an injury to happen.  Shahram Mahmoodi got injured, since he was tired. Kovac’s coaching bench is also weak. I request from federation to have an evaluation session after the World Cup”

Mohammad Torkashvand noted: “We acted poor but we did not lose anything. The World Cup was a shock; Kovac is not the main guilty person. Anyhow these coalitions happen in the sport, there is always win and loss, this tournament was a big shock to our team. This Championship was not our last chance for getting quota for Olympic; still there is a chance for us to achieve the Olympic ticket in an upcoming tournament. We had a series of difficulties, those should be experience for us and we should work and resolve the objections for being able of achieving the Olympic ticket. We should not lose this opportunity, in case of losing it we should wait with regret for another 4 years till the next Olympic. With Kovac we had got good results in the last but in a section of time we faced with mental problems. When Kovac cannot take out the team from spiritual and mental pressure it is a weakness for him. From spiritual and mental view Kovac himself was not good in the World Cup; he was nervous and could not guide the team properly.”

Alireza NAdI – ex capitan said: “I do not see motivation in the team. Kovac is guilty. I do not know what is happening in the team but we were losing continually. From technical point of view our team is good. But we do not have winning motivation. Creating motivation should be a  duty of the Coach and the Capitan player; unfortunately I do not see this factor in the team. It may be that the substitutions of players could be one of the solutions. A player with lack of motivation should not be in the national team. Creation of motivation is an art of the coach. When a player is sure that he is fixed in the team combination, winning or losing does not affect over his position and he will be fixed in the team, he would feel stability in his position. Player should feel the danger of being substitute in any moment.”

Aziz Partovi said: “Any player with his full existence should be at service of the head coach and technical staff .He should perform designed plans inside the court in proper way.”

Mohammad Reza Damghani said: “We haven´t seen the 100% capability and fighting spirit shown in the previous 2 or 3 years in the volleyball team of Iran. I hoped that during the World Cup any kind of good miracle could happened and we could take the winning way.  But in the past month we have not had readiness and capability of the previous years. Unfortunately the push points have not been relieved   and marginal difficulties still exist.”

Farzad Farhadian said: Players, coach and technical staff aimlessly and stressfully performed in the games, hopping to achieve a few unexpected wins, which could bring down the spectators’ and criticizers’ flame of excitements. We had the best opportunity to learn from these recent international fields and to continue our typical presence in volleyball.

To all these problems, who would give answers, and who should find solutions?

If the coach who is offered facilities and is earning comprehensive salary cannot gain acceptable results, what is the difference between him and local coaches?

One Volleyball website quoted Coach Kovac in a press conference: “We have to try and understand our problems because our first competition next year is the Olympic qualification in Japan. I know my team is better so, we’ll try to prepare as good as possible and be ready for qualification.”

The good thing is that the coach and the captain remain optimistic for their future and Iran will try to qualify for the 2016 Olympics.

Yes, volleyball fans in Iran are still optimistic and supporting their team. Other Asian teams are trying to become stronger. But still Iran has put them behind. The recent ranking table of FIVB   is clear evidence for this claim.

Davarzani president of Volleyball federation said: “The results of world cup were a warning. Hereby I express my apologies to the people; their expectations were not fulfilled by the national team.  There are some statements that volleyball has done a return to backward, and this is not correct. We are  putting an even higher degree of support over the technical staff. The team”B” and junior team did not take part with high potential in related championships. What happened goes back to mental and spiritual aspects of players, we  will survey those in next week’s meeting.  We will also make a decision on whether Kovac will continue to work with us. Some of our criticisms were correlated to his assistants, he was to this belief that he had chosen a good staff, we saw that it did not work. Arriving to the Olympic Games is our aim. And if we need to change the head coach, we will do this since volleyball should continue its progressive route.