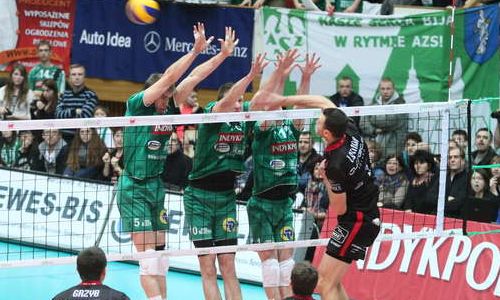 One of the weakest teams of the last season is now the leader of ranking in PlusLiga. Last weekend was also a witness of a hit – Skra Belchatow versus Resovia Rzeszow.

In the 5th round, Transfer Bydgoszcz scored the first point in ranking. With new players supporting them – Pawel Woicki and Carson Clark – Bygoszcz was very difficult to beat for Zaksa Kedzierzyn Kozle. An American wingman, after arriving to Poland a few days later, was a huge help and gave his team 22 points.Zaka, on the other hand, is not on the greatest shape these days. Dominik Witczak, after a splendid beginning of this season, now is not doing so well, but Grzegorz Bociek replacment was rewarding. Zaksa came out of this battle with 2 points and Jurij Gladyr was MVP (14 points, 69%).

Jastrzebski Wegiel had no bigger problems with defeating Bielsko-Biala. BBTS showed some fighting skills and they even won the third set, but Lorenzo Bernardi didn’t let any unexpected development to happen, so he adjusted his team squad to the situation. With great help from Van de Voorde (58%) and Bontje (88%), Jastrzebie added three points to their general result.

Hit of this round! PGE Skra Belchatow hosted Asseco Resovia Rzeszow. Obviously it had to be a long game. So it was – five sets and many twist. Both teams made a huge number of mistakes (Skra – 32, Resovia – 27). It was a good game of Andrzej Wrona (70%, 14 points) and Stephane Antiga (58%, 15 points) from Skra. On the other side support came from Lukasz Perlowski (with an outstanding efficiency of 90% and 10 points) and also Olieg Achrem (16 points, 42%).

AZS Politechnika Warszawska was practically crushed by the new team in the ranks. Cerrad Czarni Radom easily scored 3 points. The best scorers in Radom were Jakub Wachik (20 points, 60%) and Wytze Kooistra (17 points, 52%). AZS Warszawa does not have the greatest time lately. They have been loosing games both in PlusLiga and European Cups. Their next game is with Asseco Resovia, so it seems like there is a lot of work ahead of Jakub Bednaruk and his team.

Both AZS Czestochowa and AZS Olsztyn won their games for three points. Czestochowa killed Trefl Gdansk 3:0 winning in one of sets 25:13. Young Michal Kaczynski had a great performance, scoring 18 points. This victory is as much more impressive since Czestochowa has to deal with a lot of injuries in the team and play without Milosz Hebda or Jakub Vesely.

AZS Olsztyn with an admirable form jumped into the leading position in PlusLiga ranking. By now they won four out of five games. Grzegorz Szymanski is showing the greatest of him these days. In that particular game he scored 23 points, as well as Rafal Buszek.