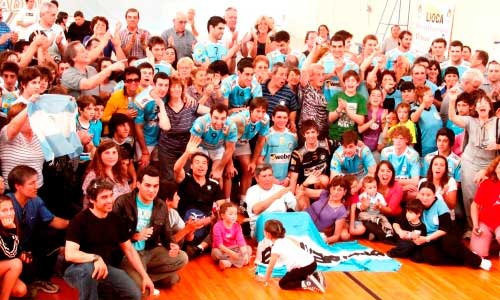 Drean Bolívar released anthem and is happy in Serie A1 League Argentina. It has perfect score and it takes three points separating the escort.

In the previous to his fourth win (against Sarmiento), held a meeting with his fans that fed force to the player. Popular singer Fico presented on live the song he composed in honor of the club and became the anthem.

Bolivar has two objectives: to amalgamate the group as soon as possible (since only three players re-signed from last season) and, of course, be champions. So far is well: thanks to the scoring of the opposite Evandro and Serbian Jekic, and also firmness blocking, the Eagles stomp in the league. “The team still lacks a lot, at times we played well but we also have some irregular sets,” said spiker Javier Filardi after the 3-1 triumph over Formosa Union.

“We take the good serve that we have and I managed to adapt to the Argentine game, which is more defensive than the one I know in Brazil,” says the setter Thiago Gelinski excited, “We are working hard to keep going,” completed the puppeteer on the field .

Coach Marcelo Silva is satisfied with the performance beyond the results: “We are very happy. When our serve is fine, we play better. We must create the mindset to seek the match constantly”. The price of ambition is the large errors: “We must reduce the margin of mistakes but this will be achieved over the course of the weeks,” analyzed, “The team is growing and we intend to show the aggressiveness that the coaching staff wants. We played more than 20 games and during recess and we will come back stronger“.

The championship came at an impasse until 3 November, because of Pan American Games. On return, the pointer Bolivar receive the second in ranking, Boca.