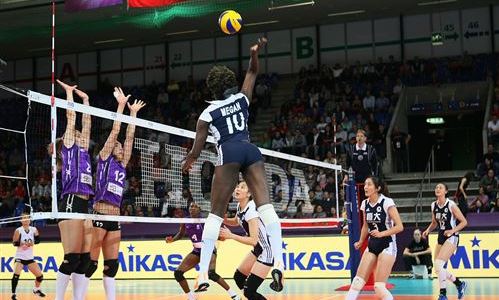 Gözde Sinsirma (7 points in the opening set) led her squad to an undisputed first set win. Even though there was not much to separate the two teams at the start of tonight’s Pool B duel (10-8), the European champions progressively took command of the match. The Guidetti’s team showed all their power at the net, giving the US blockers a hard time (25-16).

Iowa Ice kept an excellent team spirit early in the second set. The squad of coach Janelle Hester led 5-3 but could not benefit from their advantage as Istanbul quickly regained momentum. At the first technical break, the Europeans led 8-7 and extended the margin gradually to seven points at the second technical timeout. Setter Naz Aydemir repeatedly found gaps in the US defense, putting a lot of pressure on libero Caitlin Mahoney and her teammates. At 24-12, Carolina Costagrande closed it out for the Turks with a remarkable block winner on Andrea Landi.

For the third set, Vakifbank coach Giovanni Guidetti sent in Uslupehlivan for Jovana Brakocevic and Jelena Nikolic for Carolina Costagrande. However, it did not change much in terms of relative strength and score. Guidetti continued his replacements with younger players getting a look-in. 23-year young Polen Uslupehlivan brought up match ball at 24-17 before Güldeniz Onal ended it 25-17 and 3:0 for the favourites from Europe.

In front of 2.000 thrilled fans in Zurich’s Saalsporthalle, the local heroines jumped out for a 16-14 lead in the first set. At 18-14, Kenia Carcaces added another winner to Volero’s records to force Guangdong Evergrande coach Lang Ping calling her ladies off court. Yunli Xu responded with a remarkable block kill for China to come closer at 17-19. Volero kept momentum until 24-20, but could not conclude. Guangdong saved four set balls before the Swiss finally prevailed. Megan Hodge hammered the Mikasa in the net. The first set featured a hard battle between outside hitters Ting Zhu and Natasa Osmokrovic with 7 points each.

The Chinese still struggled with team cohesion early in the second set. Mainly the incorporation of Megan Hodge caused major problems. Lang Ping sent in Juliann Faucette for Hodge but could not stop the Volero express at that moment of the match. The hosts rushed to a 20-15 lead with Natasa Osmokrovic and Kenia Carcaces on fire. The Chinese blockers did their best to stop the strong Volero hitters but where not good enough. Carcaces ended the second set in Zurich’s favour with a well-timed tip in Evergrande’s no-women’s-land.

Two sets down, the team of Lang Ping needed a quick reaction to keep their hopes for a second win alive. Lang Ping’s players kept calm and progressively put more pressure on Volero Zurich’s defense. It seemed as Guangdong had gained momentum now. Nevertheless, a 24-21 lead was not enough for Evergrande to conclude. The Swiss bounced back to 24-24 with the set balancing on a knife’s edge until 30-29 for China. With their ninth set ball, Ting Zhu found a gap in Volero’s block to bring the Chinese back on track.

However, the Chinese comeback did not last for long. The hosts retook command right from the beginning of the fourth and last set. It seemed as Volero’s coach Jan de Brandt had found the accurate words for the crucial moment of tonight’s duel. The local heroines displayed a remarkable fighting spirit and quickly set the pace for an impressive finish. At 21-24, Martina Giuggi sent the Mikasa long to offer Volero Zurich a well-deserved 3:1 win.