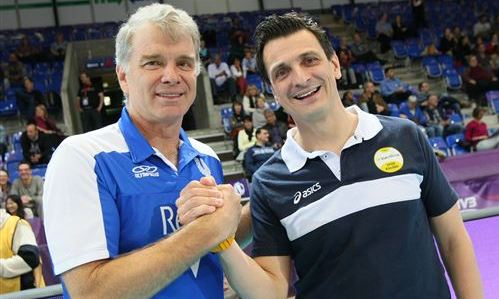 Vakifbank Istanbul overcame Unilever Volei Rio De Janeior in the duel of two prominent volleyball coaches as Giovanni Guidetti (probably the best in women’s area) and Bernardo Rezende (alive icon of world volleyball). Both the teams have already picked up semi-finals spots as well as Volero Zurich that defeated Kenya Prisons in straight sets and clashed Pool A.

The two teams felt their way into the match slowly and they were level through 7-7 when the wheels came off for the Europeans. Outside hitter Kenia Carcaces and opposite Olesia Rykhliuk started the Swiss offensive firework with some blistering winners from the wings. Volero had the set under control but they, too, experienced many ups and downs in the first set. Kenya Prisons did their best to catch up but they were not powerful enough. Nadja Ninkovic concluded the second set ball for Volero at 25-17.

The Swiss eased to an 8-2 lead at the first technical timeout with a couple of good shots from captain Natasa Osmokrovic and a nice block from setter Karine Guerra. 19-year young Laura Unternährer helped the hosts’ score along in the second phase and the favourites were 16-6 ahead at the second technical break. Olesia Rykhliuk booked another block winner and sent a cross-court shot zinging through the African defence. An Kenyan service error ended the second set 25-13 in Volero Zurich’s favour.

The Kenyans didn’t help their cause with some sloppy play early in the third set, sending shots long or into the net, and Zurich cruised to an 8-1 lead at the first technical break. A Rykhliuk hammer and a quick combination at the net by second setter Jovana Gogic and Ninkovic extended that to 14-3 and the margin was 13 points at the second technical timeout. The Europeans followed up with some spectacular play and it remained all one-way traffic until 25-6.

Vakifbank Istanbul jumped out for a quick 4-1 lead early in the first set. Unilever coach Bernardinho had lined up 23-year young Roberta instead of former national team setter Fofão. The Turks were the better team at the start of Friday’s much-awaited duel between two of the tournament’s favourites. Captain Gozde Sonsirma was the leading force for Istanbul while middle blocker Carol was the key player on the Brazilian side. At the second technical timeout, the Europeans led 16-14. At 15-19, Bernardinho eventually sent in Fafão who quickly had a positive impact. Unilever booked three consecutive points to shorten the gap to one point at 18-19. However, Istanbul kept the upper hand. Gözde brought up set point with a service winner and Jovana Brakocevic closed it out for Istanbul at 25-20.

Unilever Volei started the second set poorly and didn’t really get much better. Brazil coach Bernardinho called his second timeout as his team fell to 5-13. Gabi managed to land a couple of kills but her teammates struggled, perhaps not surprisingly as they had a short preparation phase before the tournament. The Turks meanwhile have won 48 matches in a row and were looking to continue their fantastic run here in Zurich. A well-timed tip by Gözde put Turkey 22-17 ahead and the Guidetti kept the pace until 25-18.

Brazil breezed into a four-point lead in the third set but an early timeout helped limit the damage, and the Turks turned the tables with six consecutive points to make it 9-7. There was nothing to separate the two teams in the middle of the third set but Unilever pulled away from 21-21 with Brankica Mihajlovic coming up with a block on Akman. A service winner from setter Roberta gave the South Americans a three-point advantage at 24-21. Carol ended it in Unilever’s favour with an impressive block kill on Carolina Costagrande.

However, Unilever’s set win was not more than a flash in the pan. The Europeans champions quickly regained momentum in the fourth set and never looked back until 25-18.