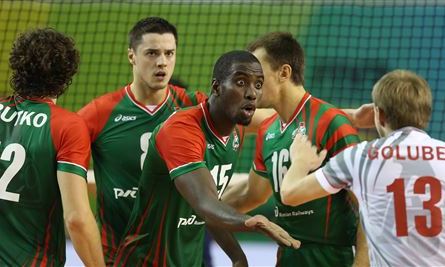 The champion of South America, UPCN San Juan, shut up a fantastic series of 21 row wins of Trentino Diatec at Club World Championships. Argentineans beat 4 times champion in tie-break affixing seal to the first place in Pool A while Trentino has to defend its stay in Brazil in the last game against Panasonic Panthers. In Pool B, Lokomotiv Novosibirsk and Sada Cruzeiro created the best game so far in Brazil finished with the triumph of Russians.

Filippo Lanza’s block and serve combined with several opponent errors to give Trentino an 8-6 advantage. UPCN tied at 9-all with the spike by Junior Santos and ace by Theo Lopes. Trentino got a three-point lead at the second TTO with Emanuele Birarelli mixing spike and block around one ace by Tsvetan Sokolov. At 20-15, UPCN called for time out and came back with a reaction led by the spike from Santos and ace from Lopes to close at 20-18. That’s all they could do as Trentino returned on track carried by Lanza and Sokolov for the 25-22 score.

Martin Ramos helped UPCN into an 8-5 advantage in the second set with two good attacks. Sokolov scored with two terrific parallel shots from the right side to tie at 14-all. Trentino went into the lead 16-15 and Alexandre Ferreira fired one ace for a two-point margin but then served long and Santos equalized at 17 with a cannon-shot. At 23-all, Ferreira’s crashed is serve and Lanza’s attack flied long. UPCN took the set 25-23.

Sokolov scored with three spikes in the early going of the third set including one to break the tie at 7-all. UPCN recharged batteries and came back to lead 16-14 behind the actions of Lopes and Ramos. Sokolov planted a monster shot to close within one point at 19-18 but then his team made a defensive error and Lopes served one ace off the net. UPCN took the set 25-22 and the 2-1 advantage in sets.

Sokolov hammered two spikes and one ace for Trentino’s lead at 8-5. Ferreira’s couple of hits helped to maintain the three point difference. The Italian club expanded the margin to 14-9 with one ace from Matteo Burgsthaler. Javier Filardi and Santos combined spike and ace to reduce the difference at 14-11, but Lanza and Sokolov attacked with spike and ace for the 16-11 score. The Italians continued to dominate and forced the tie-breaker taking the fourth set 25-16.

Sokolov scored the first three points of the tie-breaker with two spikes and his block against Olteanu. UPCN cut the distance to 4-3 inspired by the spike of Santos but then Lanza attacked and Sokolov blocked Filardi for the 6-3 score. Santos was on again and reduced the distance to 6-5 only to see Lanza attacking again. Sokolov serve one ace for the 8-5 score. Then he missed his serve and was blocked by Ramos. One setting error by Donald Suxho tied the score at 8-all. At 9-9 Sokolov missed with a soft attempt and then attacked out of bounds but Birarelli stepped in and equalized at 11 with spike and ace. At 13-all, Ferreira’s serve sailed long and Santos blocked Sokolov for the 15-13.

Sportif Sfaxien led 8-7 and 16-15 at the technical time-outs. Deportivo La Romana tied at 20-all when Emmanuel Lara blocked Ben Abdallah. The Tunisian club won the next point via the spike by Ben Abdallah but German Recio hit back from the Dominican side. Trailing 21-20, Recio landed his spike and then blocked Ben Abdallah for the lead 23-22. Noureddine Hfaiedh and Henry Tapia exchanged kills and Kelvyn Campechano blocked Hfaeidh for the 25-23 score in favor of La Romana.

Recio’s hit off the Tunisian block gave La Romana an 8-7 lead in the second set. The Dominicans trailed 14-13 when Tapia parlayed spike and ace but Hakim Zouari evened at 15. Then Recio provided the edge 16-15 for La Romana. Tunisian Ismail Moalla’s spike and big serve tied the score at 20 only two see how Lara and Recio scored for La Romana for the 22-20 margin. The second set concluded 25-22 for the Dominican side.

Sportif Sfaxien led 8-6 and 16-13 at the TTO with Moalla and Ben Abdallah as the most productive attackers. The Tunisian side was in front 20-15 when the coach of La Romana called for time-out. The Dominicans rallied to reduce the deficit to 20-18 following the spike by Tapia. Recio scored with a tip following the big serve by Elvis Contreras and then Lara scored after another huge serve by Contreras for the tie at 20-all. Sportif Sfaxien took the set 25-23 when Zouari blocked Contreras.

Ben Abdallah broke the tie at 7 with a cannon shot from the right side and the Tunisian representative went on to build a 14-10 advantage. The score at the second TTO favoured Sportif Sfaxien 16-11. Zouari attacked and then blocked Lara for the seven-point difference at 18-11. The fourth set closed 25-14 capped by the block by Sellam against Pedro Garcia.

It was a close battle in the tie-breaker with both sides playing hearts-out. At 6-6 Zouari blocked Tapia and then Tapia’s spike sailed long for an 8-6 advantage of Sportif. The margin grew up to 11-7 with the spike by Ben Abdallah and a wild attack by Recio. The set concluded 15-11 for the Tunisian club.

Despite giving away five points via errors, Sada Cruzeiro led 8-6 in the first set. Lokomotiv used the spikes of Astashenkov and Moroz to tie at 8-8. Astashenkov scored for the 16-15 margin. Yoandy Leal sparked a rally when he evened the score at 16-all with a big spike and then served one ace for the advantage. The same Leal gave Sada Cruzeiro a two-point lead and the home continued the hot streak to take the set 25-22.

Lokomotiv led 8-6 in the second set, but Sada tied at 8-all when Leal blocked Moroz. The Russian club was in front 16-12 at the second TTO thanks to a three-point streak produced by Moroz, Butko and Astashenkov. Spikes by Leal and Wallace reduced the difference to 20-18. Trailing 22-20, Wallace landed a lightning ace but setter Butko scored with a disguise play and later Lukas Divis blocked Ferraz. Lokomotiv took the second set 25-21.

Lokomotiv was in front 8-5 and increased to 14-10 behind the offensive plays by Moroz and Camejo. Souza cut the margin to 14-12 with one ace but Moroz responded with two consecutive spikes for 16-12. Sada Cruzeiro recovered to take the lead 19-18 with three consecutive blocks by Arjona, Wallace and Cordeiro. Moroz evened the score. At 20-20, Moroz served long and Eder attacked down the middle for the 22-20 lead of Sada Cruzeiro. The home side won the third set 25-22.

The Russian club led 8-7 in the fourth. When the action resumed Wallace tied at 8-8 with a spike from the right side. The duel continued with both teams playing at a high level up to 14-14. Cordeiro missed with the spike but Moroz was positive for the 16-14 score in favor of Lokomotiv. Back in action, Moroz served one ace for a three-point gap forcing a Sada Cruzeiro to call for time-out. Another ace by Moroz extended the lead 18-14. The fourth set finished 25-19 for the Russians with Moroz nailing a shot.

Volvich scored with consecutive blocks against Souza and Luis Diaz for a 5-2 Russian lead. Divis scored down the middle after the big serve by Camejo and Volvich repeated his block against Souza for the 8-4 advantage. Sada Cruzeiro reduced the difference to 9-7 with the attack by Cordeiro. Wallace put the home team within one point and Lokomotiv called for time-out. Moroz came alive for Lokomotiv with his attack for 12-10 but Ferraz answered to keep the home team in the game. The score was tied after a Russian error. At 13-13, Divis landed a cross-court kill but Carbonara tied. One Sada’s unforced error by their libero and the setter gave Lokomotiv the lead at 15-14 and then Leal attacked too long for the 16-14.