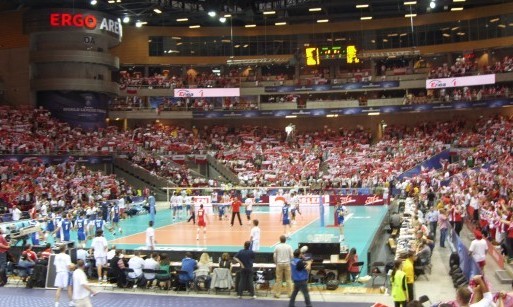 Only three days remaining until the start of the most important volleyball this year’s tournament in Europe. Sixteen most valuable teams are brushing up their shape to fight for glory and to fulfill their fans desires. Which team will come to throne of European Volleyball at the Parken Stadiom in Copenhagen and gain a ticket to Grand Cup Champions? Will Russia maintain its supremacy? How the hosts, Denmark and Poland, come out?

The descendants of Vikings and the co-hosts of EuroVolley 2013 are not passed for favorite of the European Championships, on the contrary, they seems to be a total outsiders and every single scored point will be true success for them. However, such perception of Denmark cannot be any surprise because this team is rather anonymous on the world stage and only real volleyball “geeks” are able to point the name of any players without a second thought, despite they usually play in the respected leagues like German Bundesliga or French Pro A not being though their stars. Moreover, all results, achieved this season, also prove a puny potential of Fred Sturm’s (head-coach) boys. Denmark participated the European League contest this summer and was classified on the next-to-last spot, losing 11 of 12 games. What is more, pre-tournament matches are not the good omen, that is why the bookies do not believe in Denmark’s success. Perhaps, the very presence among the European elite is significant ennoblement to Denmark and huge chance for promotion volleyball, thus the Danish activists need to hope that the “Vienna Effect” is going to take place and volleyball will catch up for example handball as far as popularity in this Scandinavian Country.

“Squadra Azzurra” seems to be a bit of enigma in spite of great conditions during the last tournaments and still being estimated as one of the biggest candidate to grab the gold medal at Parken Stadium in Copenhagen. It is caused by Mauro Berruto and his some controversial decisions, which has been taken since World League Final Six. Some People claim some ideas can even seen the final score. There are two vital issues. Firstly, the whole agitation concerns personal policy in appointments for Berruto turned an offer from the best player in the world, Osmany Juantorena, down to bring him into the team and he additionally left Michal Lasko, the outstanding opposite, at home. Secondly and more important, it is complained that a preparation schedule was not properly projected. Very long training term and only few friendly games may effect a lack of fluency in play. Will Italy succeed?  The question depends on the following trio Ivan Zaytsev, Cristian Savani and Emanuele Birarelli. If they are able to keep up his shape showed at the World League, “Azzurri” may stand on the podium or even do their achievement from 2011, it is the final. The largest betting companies also include Italians among the favorites, so you cannot earn a lot of money having bet your money on still actual European runners-up.

Belarus debuts at European Championships and sets its sights on bringing at least playoffs at once.  In fact, this goal is attainable since Denmark should not camber as the hosts are much less experienced and simply worse. Belorussian National Federation activists also gave their best  bringing on all more valuable players like Siarhei Antonovich or Aleh Akhrem, who has ambitions to represent Poland, as well as provided possibly the most handy training conditions, but a bit too one-sided. Why? Belarus took part in the “Viacheslav Platonov’s Memorial”, where could have faced up just Russian clubs preparing for the new season and there can appear a lack of familiarity with other volleyball styles. Nevertheless, you can dream until you are alive. Belarus should set up very ambitious targets, even if it is hardly possible, because volleyball is a sport where everything may happen.

“To follow in our compatriots’ footsteps and be in top 4 of Europe”- this could be the ambitious aim of Belgian National Team at European Championships. Obviously, it appears to be unreal, but if women were able to jump on the podium, why men could not have such a dream, especially when the “Yellow Tigers” are on fire after claiming the European League and will be supported by one extremely experienced setter Frank Depestele. This player arguably guarantees that Belgium will be showing off the most unconventional and incalculable style of all what can be the clue , which help them in making… semifinal…? No, it is too much. The very existence in quarterfinals will be enough and it correspondents with Belgian capabilities. Moreover, Dominique Baeyens (coach) is in possession of several young talents (Sam Derro or Kevin Klinkenberg), who are able to be incredible in single games, what may affect that they will not eat a famous Belgian chocolate after a failure in Denmark, but will be proud and have fun due to a success.

A real earthquake has happened in Polish National Team since the worst performance in World League history  this June and July. Not only did Andrea Anastasi break down a core of his squad cutting out two leaders Krzysztof Ignaczak and Zbigniew Bartman, but he also tried to enforce a new game system using an nominal libero, Damian Wojtaszek, as a regular receiver. What is more, the Italian coach of Poland relied on a fresh and talented opposite Grzegorz Bociek, who takes after Tsvetan Sokolov or Liberman Agamez as far as his physicals. At the outset, all these acts turned out to be ineffectual, because Poland failed three test matches against Serbia and here appeared a lot of anxiety among Polish fans , but not for long. One week ago, “whites and reds” claimed the “Hubert Wagner’s Memorial”, the most prestigious friendly competition in volleyball schedule, overcoming Germany and the Netherlands in impressive style and giving in only Russia. That tournament confirmed Poland’s  players did not forget how to play volleyball and are one of the greatest candidate to conquer Europe for two consecutive years, in particular that they are going to perform in front of home crowd. The following opinion is also agreed by betting companies, which numerate Poland as the absolutely certain podium member.

Slovakia is a specific team composting of a few well-known and respected players but having got only one disadvantages – ‘no winning gene’. Many times, they was able to lose a won battle as a result they drifted away from world elite and probably it will not change at European Championships. A coach, Stefan Chrtiansky Sr., cannot take advantage all best players what no doubt takes affect Slovakian solutions, because e.g. Lukas Divis is not an easy puzzle to be substituted what confirmed this year’s accomplishments. Slovakia disappointed at European League ending up without a ticket to final four and friendly matches also have passed under meaning of ups and down, therefore, betting agencies do not believe in them as well as local environment in homeland. This question can be their force because if you do not feel pressure, you can do everything with more self-confidence not thinking about any consequences.

“Les Bleues” may be the dark horse of EuroVolley 2013 despite they did not gain attendance of world  biggest betting companies. When you estimate the French skills and potential, you must take into account all results achieved this year. These are pretty mighty! France ranked 10th place at World League. This seems average, but Laurent Tille’s boys knocked Argentina, Poland and Brazil into a cocked hat in very good style. Two receiver mainly, Ervin N’Gapeth and Julien Lyneel, were a top dogs  and they were solving the toughest problems, while the very N’Gapeth guided the defensive area. In Gdansk, France will probably stronger in comparison to the World League because Tille is going to use an opposite, Antoine Rouzier, who could not take part in the summer’s contests due to micro-injuries. What is more, Jean-Francois Exiga goes back to the team and he also is able to level up. As the members of Pool A will be connected with Pool D in quarterfinals, where we have Russia, Bulgaria, Germany and the Czech Republic, the duel between Poland and France may be key. If the Frenchmen  manage to overcame Poland, they will be on the right track to in the medal zone.

The road of Turks to Poland and Denmark was not a bed of roses as had to overcome really long and hard cruise because of a poor start of the qualifying round. Turkey was beaten not only by Portugal or Belarus, but they also surrendered Great Britain. Admittedly, they made up for them, but it occurred not to be enough and Turkey just found a free spot  in play-off, where hashed out its plans for September at least in a golden set playing against Latvia. However, players from above Bosphorus have felt a breath of fresh air since an Italian, Emanuele Zanini, completed the vacancy on the post of head-coach, caused by departure of Veijko Blasic. Having been in tune with the new boss, Turkey has achieved few interesting results in friendly games holding inter alia Bulgaria down and struggling very tight duel vs Iran. Nevertheless, the hosts of European Championships in 2009 are not included to the group of ones who dominate, so their “sports summit” seems to be situated on play-offs. Obviously, if only they are able to leave the Pool Stage.