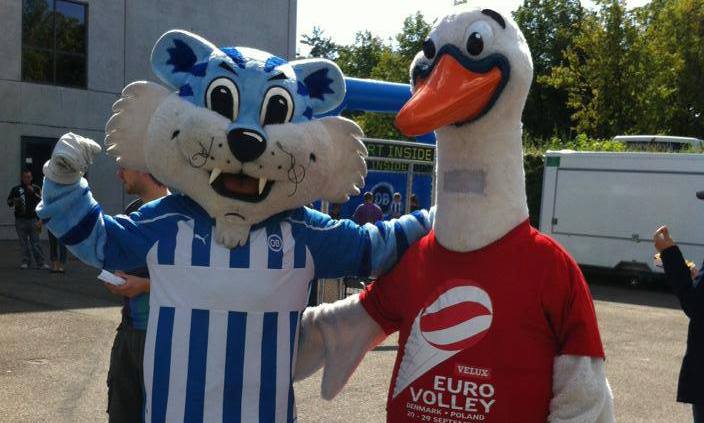 CEV European Championships will be launched in a dozen or so hours. And so read the latest announcement of EuroVolley 2013 and fell the atmosphere of this volleyball fiesta. Welcome to Denmark and Poland! It is the final countdown!

Finland for sure would like to repeat its success achieved three editions of EuroVolley ago. Then, “Suomi” secured a semi being really close to gain a ticket to the final. However, there is one, but very important problem. There has passed six years, while Finland is almost the same bunch of players without any “fresh blood” inlet. Mikko Esko, Mikko Oivanen or Olli Kunnari became six years older and this aspect is sometimes visible in their doings. On the other hand, if you take a piece of paper to write up the full squad of Finland right there, you reach a following conclusion “Hoh, they are so strong”. Are they strong enough to stir things up? Betting companies estimates that players of Santa Claus homeland are up to climb a quarterfinal and no more. Anyway, such a score would be a suitable value for Finland, unless we watch another surprise.

The defending champion goes ahead with the EuroVolley 2013 with very high aspirations despite vicissitudes last international contests. In fact, Serbia played the last good tournament in Austria and the Czech Republic two years ago, when could have pick up the trophy. Unfortunately, all consecutive tournaments were a series of painful disappointments, involving World League, World Cup and first of all Olympics. Meanwhile, a new star of volleyball, the main hope   and one of the most valuable opposites at European Championships grew up in Serbian backyard. It is about Aleksandar Atanasijevic, who has already proved many times an ability of winning matches on his own. The new player of Sir Safety Perugia exactly can become the leader of his team, but Serbia is not only Atanasijevic. A head-coach, Igor Kolakovic, also relies on very experienced duo in the middle directly from Lube Banca Macerata, Marko Podrascanin & Dragan Stankovic, and receivers of Russian Superleague Milos Nikic as well as Nikola Kovacevic. However, there is a one position giving rise to a headache of Kolakovic. It is a setter. Ever since Nikola Grbic had left the national team, the Serbian staff is not able to discover a new creator with similar skills, because either Vlado Petkovic or young Nikola Jovovic do not guarantee en equal play. As the Pool C does not seems to be very tough, Serbia should freely gain a ticket to quarterfinal and everything what will happen then (e.g. semi-final)  will be a bonus. Unless the Netherlands will stymie.

The Netherlands has at its disposal one of the biggest offensive potential in Europe including serve, attack, and counter for all players can hold opponents down by spikes, killing blocks and powerful serves. Even a setter, Nimir Abdel-Aziz, has a skill to press with a serve like a stones sometimes faster than 120 km/h. There are two sides to every story and this proverb also concerns Holland. They usually are not able to yoke and take advantage this potential in the most vital moments. The other disadvantages are some limits on defense not caused frequently by individual skills of second line players, but middle-blockers, who make their duties harder because a hole in block is the most unfavorable in the relation block-defense. As a result, centers and Niels Klapwijk (the opposite is strategic element in the Dutch playing system) are in fact essential if they dream about something more than quarterfinals. Pre-tournament matches also showed two different faces of the Netherlands, however you can observe a significant increase game by game as the Dutch beat Russia and later produced three games winning row streak against France.

Slovenia seems to an outsider of the competition in Danish Herning, however, this impression is perhaps highly invalid. If you work out particular players names, you may think ‘they -are well-known! That’s right. Mitja Gasparini, Alen Sket, Matevz Kamnik, Alen Pajenk and Tine Uranut were teach by outstanding personalities of coaching in great clubs. Now, we can observe this cooperation and learning give profits because Slovenia has build up interesting style and consumed it during preparations for the EuroVolley. Luka Slabe’s boys achieved promising scores beating inter alia Belgium, Canada and first of all Bulgaria. The last result especially have to impress. The Slovenian staff did not want to talk about any aims, however, you can anticipate they would leave the Group Stage at least to playoffs. Everything more will be a significant hit.

“Sborna” is always involved to the bunch of favorites and it does not depend if you speak about boys, junior, senior, women’s or men’s volleyball. EuroVolley 2013 will not be an exception. Indeed! It seems Russians have never ever been as strong as it take place today, hence they are the leaders not only among bookmakers, fans, journalists, but also according to the rest of competitors. There are numerous premises to think so, because Russia is a complete team, which has dominated world volley since the Olympics 2012, with at least 4 extraordinary candidates to particular positions. World League 2013 proved that “Sborna” is up to struggle and win without such players like Maxim Mikhaylov or Alexander Volkov and you cannot feel the difference. It is symptomatic if one of the best opposite of one of the best leagues in the world, Nikolay Pavlov,  was not recognized by Vladimir Alekno and when he finally appeared  inside the team, he immediately became a key player. Russian advantages are countless, for example powerful serve, high block, the very Dimitriy Muserskiy or the impressive bench influence peoples imagination, so can we find any weaknesses what have to happen to stop Russia? This question is pretty composed and does not only depend on the disposition of any opponent. First of all, a team, facing up Russia, have to do their best and hope that Andrey Voronkov’s team will not switch on their killing gun which is serve. Moreover, any opponent have to make a friend with Russian block and then make it naïve in order to take advantage its presence. Such a doings probably will help to district much tremendous towers. As you could read above, bookmakers believe in success of the Olympic Champions, therefore you cannot make a fortune on their triumph.

Bulgaria will join the European elite stronger then during the summer’s World League session, when “Lions” were ranked just behind the podium. A coach, Camillo Placi, may additionally make use of two very good middle-blockers Teodor Todorov, who is included to the best blockers in Russian League, and Nikolay Nikolov, who usually flaunts his attacks’ reach. Both are really big strengthens for the team and can put up its level , but the question is just one. Will Bulgarians are going to change its style? Rather not. They will still take advantage two main stars Tsvetan Sokolov and Todor Aleksiev until they are “alive” and sometimes use the other wing-spike or middle-blockers. This philosophy is said to be extremely, but has been successful so far, hence there are no reasons to be modified. An Italian thinker and poet, Niccolo Machiavelli, said “the end justifies the means”. Friendly games arguably remained a lot of anxiety in front of Bulgarian fans because of high jumps and very low and painful falls. They had to acknowledge failures e.g. against Slovenia, Turkey or Serbia and the preparing term has been finished with an average account including 5 wins and 4 loses. Nevertheless, Bulgarian national team is bracketed favorites because the results of the last two international contests are clear – two tournaments, two times in top 4. World bookies agencies also predict a participation of Lions in final 4 again.

In 90’s, Gary Lineker thought up the following statement: “there are 22 players running around the ball at the playing field, but Germans finally win anyway”. Unfortunately, this sentence does not refer to volleyball since German volley national team came down the European Champs two years ago having ranked 15th place. This edition must be odd and it is possible as the shape of Germany grows more and more, what is confirmed by friendly meeting results. In particular way, Gorgy Grozer and rest cheered themselves  up last week overcoming Italy at away stage twice. Thus, the “Black Eagles” may launch a fight for very high goals on Friday despite the head-coach, Vital Heynen, said EuroVolley 2013 is not important at all. An opinion about Germany was also set up by its ex trainer Raul Lozano, who said the major and element should the serve and attacks efficiency of two players as Gorgy Grozer and Denis Kaliberda. They will guide Germany ahead.

There has not reminded a lot of the Czech national team, which shone bright in Italy three years ago claiming 10th place in the World. Do not expect to see such a players right there like Peter Platenik, Jiri Popelka, Jakub Vesely or Petr Konecny. It would be in vain. They have already closed their advantage with international volleyball either have not want to be a part of the team yet. In fortune, the Czech Land was prolific in very good players and you will be allowed to observe other stars perhaps in some experimental composition, but still in good conditions. What does this experiment consists in? In the course of preparation, Stewart Bernard (head-coach) decided to change a nominal position to one of the most valuable opposite in the world Jan Stokr. The “Giant” (Stokr) has debuted in zone no. 2 as a receiver, that is why you should not be astonished if you see him receiving balls to Lukas Tichacek. In spite some personal losses, the Czechs appear to be strong anyway, but… they were drown to the Pool D  called “Death group”, so not must show in their 110% to be in playoffs.

The first part describing Pool A and Pool B you can find here!