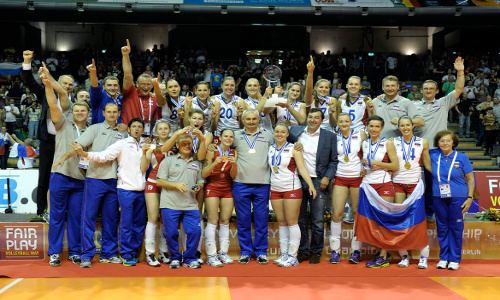 World No. 6 Russia jumped out for a 4-0 lead at the start of the much-awaited gold medal match of the 2013 CEV Volleyball European Championship – Women. German captain Margareta Kozuch opened the score for the hosts with a hammer from the right side. Both teams quickly put a lot of pressure on the opponent’s passers. Russia kept the upper hand until the second technical time, but could not pull through. Two German block kills drew level at 17-17. There was not much to separate the two teams at the start of tonight’s deciding duel of EuroVolley 2013, co-organized by the German and Swiss Volleyball Federation. Russia had some advantages in blocking (6-3) while Germany served much better. Kosheleva found a gap in Germany’s defence to make it 22-20 for Russia. The hosts did their best but could not prevent the East Europeans from seizing their second set point at 25-23. Natalya Obmochaeva was the outstanding player in the first set, scoring ten times for Russia.

The balance of power changed in the beginning of the second set. The courageous German ladies took more risk, provoking several Russian mistakes. Viktoria Chaplina served three missiles in a row, but could not close the gap to more than four points at the second technical timeout. Saskia Hippe stopped Kosheleva at the net to move the scoreboard forward for Germany (18-13). Kosheleva and Obmochaeva responded with two blistering winners to reduce the German advantage to three points at 16-19. However, it was not good enough. Heike Beier led her teammates to a well-deserved 25-23 set win. Russia still struggled with poor passing (25% positive passing).

2010 world champions Russia regained momentum in the middle of the third set. At the second technical break, the team of head coach Yuriy Marichev had earned a two-point advantage. Nevertheless, the brave Germans bounced back with Hippe on fire (20-20). The set balanced on a knife’s edge now, with both teams alternating spectacular offensive combinations with impenetrably defense work. However, Russia kept the upper during ‘money time’. At their first set ball, Russia’s 178cm-tall setter Ekaterina Pankova stopped Beier with a remarkable block winner to offer her team a hard-earned 2:1 set lead. With her eight winners, Obmochaeva was again the driving force for the World No. 6.

Russia kept control of the match early in the fourth set. The Germans hardly found an answer to the powerful Russian game. Giovanni Guidetti sent in Jennifer Geerties for Maren Brinker, but could not end Russia’s rush to a six-point lead at the second technical break. The Russian express was unstoppable now. Obmochaeva hammered for a 20-13 lead before Kosheleva added another winner to her remarkable record book. At 24-14, Most Valuable Player awarded Tatiana Kosheleva brought up match point. One rally later, Natalya Obmochaeva ended it in Russia’s favour, bouncing the new European champions in heaven.

Russia as the winner of the 2013 CEV Volleyball European Championship – Women have qualified for the 2013 FIVB Volleyball World Grand Champions Cup featuring a total of six teams per gender with the hosts Japan being joined by the continental winners from Asia, Europe, NORCECA and South America with an additional country selected by the FIVB.

With Germany and Russia, the two best-ranked teams of the 2013 CEV Volleyball European Championship – Women as well as organizer Italy have qualified for the 2014 FIVB Volleyball World Championship.