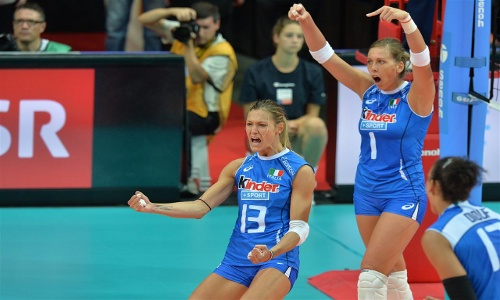 Beginning of the meeting showed that none of the teams will not easily forgive – to state 3-3 point for point . However, these were the beginnings of a nice bad because the counterattack finished by Valentina Diouf Italians came to the first two-point lead in the match (5-3). Although women quickly recovered the losses, but the first technical break came down, again losing to the two eyes. When the demons come back in the game with “red and whites”: simple errors , especially in attack and reception. It was opportunity for Italian women who did not presented anything in particular, but benefited from gifts of Polish women. Six-point advantage at the second technical break gave the representation of Italy playing comfort. Poles couldn’t scare “Azzure” by serves and the prism on the Italian side of the net led Indre Sorokaite. A little optimism poured in Polish ranks only double substitution. Attacks began to stop King Kasprzak and Maja Tokarska and placed on the floor Joanna Kaczor. Women reduce losses of up to two points, but it Italians won set 25-22.

Good game from the end of the first set resulted in the beginning of the next views. White-Red played hard in attack and break through the defense, which gave the four-point lead at the first technical time out. Piotr Makowski finally able to speak about details: correct the setting of the block and encouraged to attack the quarterback over Noemi Signorile. With the successful start of Women after a while, however, was only a memory . Italians reinforced the serve, the quickly recovered losses (after 9) and began to build a lead. Piotr Makowski changed, took a break, told, but not much it seemed. Carolina Costagrande and Valentina Diouf attacked, so that there was nothing to collect. In the game of the Polish team lacked stability, repeatability and accuracy, much as it was the case and improvisation. Hope restored yet for service entrance by Katarzyna Konieczna, when the loss narrowed to two points (21-23). However spurt was not enough – Italians again won 25-22.

While in the first two scenes of women at least partially, been able to make the fight against Italian NT, then in the third set and run it. Speeding riders of Marco Mencarelli quickly came to lead 5-0. – We’re going to play – called in the course of time, at the request of Piotr Makowski . -Poland! Poland! – could be heard from the stands of the hall in Zurich. White and red did not have this set but nothing to say. They came out to them only a single action, but relaxed Azzure managed to almost anything. Italy won the set 25-13 and the match 3-0 , in principle, never for a moment losing control of the game. Tomorrow Italy will play with defending champion, Serbia at 8:30 pm.