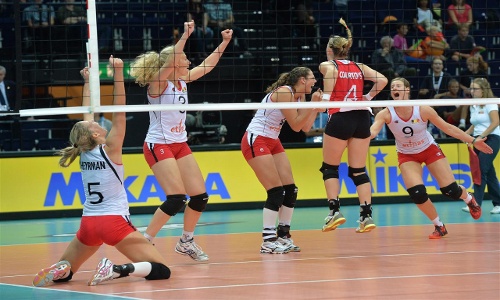 3.000 spectators in Zurich’s Hallenstadion saw a thrilling fight for the crown in Pool B. The favourites from Italy started as expected by gaining momentum quickly (8-4). The Belgian team shortened the deficit to 11-14 by good serves and an aggressive offensive play of Lise Van Hecke. Nevertheless, Marco Mencarelli’s players kept cool and won the opening set 25-22. Important at this moment was Italy’s opposite Valentina Diouf with her strong attacks.

The story of the match changed in the second set. The “Yellow Tigers” played much more focused and rapidly took a five-point lead at the first technical break. Freya Aelbrecht put a lot of pressure on the Italian defenders who did not find a way to stop the powerful Belgian offense. Italy’s head coach Marco Mencarelli called his players several times off court but it did not help. It was not the day of the “Azzurre”. Belgium sealed the set 25-16.

The Italian serve became better in the third set. However, Valentina Diouf and her teammates never found their usual rhythm. The Belgians worked well as a team and led 16-13 at the second technical timeout. Italy bounced back at 21-20. However, it was not good enough. In the key moments of the third and probably decisive set, Italy struggled with uncommon mistakes and insufficient power at the net. On the other side, Belgium played like Swiss clockwork, flying to a well-deserved 26-24 and 2:1 set lead.

The Italians felt the pressure on their shoulders. Gert Vande Broek’s players on the contrary played freely und without any fears. The “Yellow Tigers” showed great team spirit and quickly led 21-13 in the fourth set. The Belgians never looked back and ended the contest with their fifth match ball 25-18.

The local heroines started free-minded and took an early 8-4 lead. Fabrice Vial and his players seemed quite nervous. The Swiss served well and showed a strong blocking game what led them to a six-point advantage at 21-15. The French players could not find a way to break through the Swiss defence. Consequently, host Switzerland sailed to a well-deserved 25-17 set win.

Fabrice Vial’s players started better into the second set, leading 8-6 at the first technical break. Young Swiss player Laura Unternährer performed well on the left side. However, France was the better team now. Their reception became better and better and the Swiss found no solutions to stop the strong French spikers. France concluded the second set 25-17 in their favour.

France kept momentum in the third set. The Swiss serving game was not as precise as it was in the first set. After a comfortable 8-4 lead for France, the Swiss players needed a fast reaction. The hosts won six points in a row and led 10-8 after precise block work. French middle-blocker Christina Bauer answered with some nice moves in the middle to bring France again four points ahead (16-12). Swiss coach Svetlana Ilic tried to push her players to the limits. It worked as Switzerland started to serve and block better. The host nation proved an incredible will and won the set in extremis 26-24.

France was under pressure now. If they wanted to keep their hopes for the playoff round alive, they had to improve their game quickly. Fabrice Vial found the right words during the set pause with his team coming back strongly. The French took a quick 8-4 lead. The Swiss found better into the game but could not shorten the deficit. The Swiss’ blocking system did not work at all at that moment of the match. Consequently, France wrapped up the set in style 25-17.

France jumped out for a 5-1 lead in the fifth and deciding set. Ilic called her players off court to give new instructions. The Swiss bounced back heroically to tie the game at 5-5. However, France kept cool. The French scored four consecutive points and never looked back (15-9).