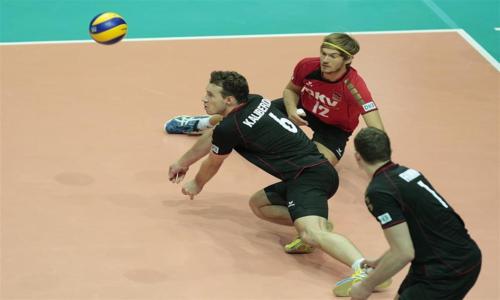 On a pretty much weird last day of actions the spectators in the Polish city of Gdynia saw the four teams competing there play fair games without considering the next round options too much. Germany was too strong for the feeble Czechs, whereas Russia might’ve broken a championship record with their amazing fourteen aces that caused way too many problems for Placci’s Bulgaria.

Having already demonstrated abundantly many mistakes on the two previous days, the Czech Republic played their last chords at the 2013 CEV VELUX European Championship against the pleasant surprise in Gdynia Germany. The match was a routine procedure for Vital Heynen and his boys, who only struggled in set two. The Czech side opposed to the Germans till 21-20, but eventually surrendered and lost hope for stealing some consolation points. Jan Stokr was finally awarded with game time on his favourite position due to the injury David Konecny got before yesterday’s clash with Russia. The captain Ondrej Hudecek helped his setter with good reception, but was again clueless in attack. His substitute Tomas Hysky did better, but not enough to support the only real threat for Germany – namely Stokr. Once among the world’s best, Lukas Tichacek is clearly far from his best volleyball and was benched for Ondrej Boula.

On the other half of the court Germany did not need to display its best volleyball to get things done. During the three days in Gdynia, however, the Bundesteam finally managed to play great for several matches in a row and now they are in charge of what might follow in the quarterfinals. This team can certainly make a big step in direction Copenhagen, but will first have to repeat any of their Gdynia evenings once more. 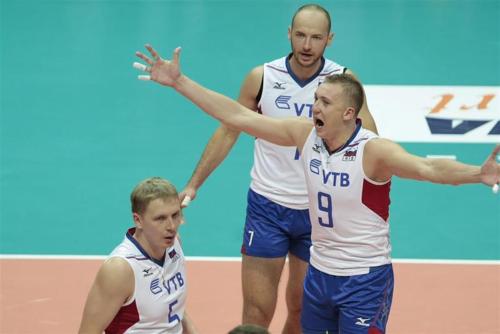 After both teams lost to group leader Germany, it was made clear that they will not face each other until an eventual final in Copenhagen. Departing to the two different halves of the playoff schedule, Russia and Bulgaria played a very open game without thinking about future opponents. The two teams are in possession of two of probably the best blocking lineups in the championship, but that was not even close to where the game was decided. Andrey Voronkov‘s lads enjoyed a monster evening in terms of serve efficiency, which made the difference for Sbornaya at the end of sets one, three and four. The championship’s general strategic sponsor VELUX promised a money donation to a specifically chosen club for each ace served and Russia did a very good job tonight supplying provision. The overall amount of fourteen aces by Russia might even turn out to be a new record. Voronkov could be happy seeing his team improving significantly in comparison to the opening game, but their physical strength might not be enough to go all the way. The reigning Olympic champions will have a relatively easy task on Tuesday against Slovakia, but then the big test on Wednesday will show whether Russia will vie for another title.

Camilo Placci had some pre-game concerns following yesterday’s injury of key receiver Todor Skrimov. He is said to be ready for the playoffs, but the Bulgarian staff did not risk his health, especially after the team’s secure next round spot. The Bulgarians tried their best to stop Dmitriy Muserskiy, but had huge trouble receiving his monster serves. Valentin Bratoev was substituted early for Nikolay Penchev, who was reliable throughout most of the evening. Overall, the “lions” did not show their best volleyball. With the 3-1 defeat against Russia, Bulgaria will have to pass through the siege of the hosts Poland and then the well-known Germany to achieve the semifinals they claimed they have come for. However, Placci’s analysis needs to be focused on a better transition and defence, plus a very wary usage of the triple block, which was totally futile against Germany and Sbornaya.