EuroVolley: Italy and Belgium are going to fight for the top rank 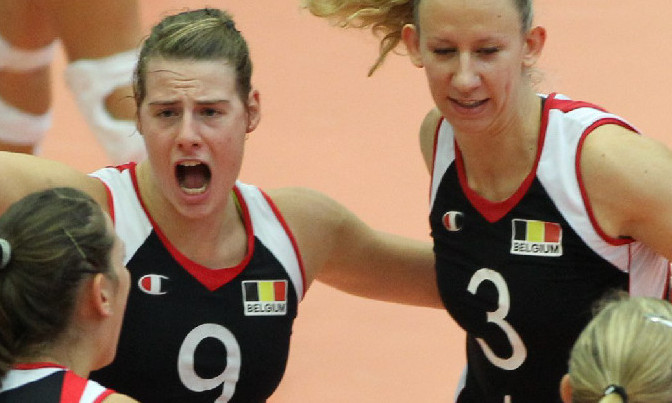 Italy beat its western neighbors of France claiming the second win in the EuroVolley 2013. The Female “Les Bleues” were able to face and overcome “Azzurre” only in the third set while there remaining parties fell prey to favorites. On Sunday, Italy will stand in front of Belgium to struggle for name of no. 1 in Pool B. Belgium also is still unbeaten after defeating France on Friday and coping with Switzerland today’s afternoon.

The Italians fulfilled their role as favourites at the beginning of the game and quickly led 16-10 at the second technical break. Italy’s opposite Valentina Diouf broke through the French defence that stood under an enormous pressure. The French players did their best but nothing helped. At 24-16, Caterina Bosetti put an end to the first set by a strong smash from the left.

The start of the second set was another proof of the Italian dominance. Fabrice Vial’s players could not find a way to stop Italy’s aggressive offensive play. A huge 3-8 deficit was the consequence for the outsiders. Middle-blocker Christina Bauer and her teammates fought bravely but Italy’s wing-spiker Carolina Costagrande and opposite Valentina Diouf sent some sharp missiles to the French side. The Italian lead increased to 20-10 and ended up in an undisputed 25-15.

Fabrice Vial’s players mobilised all their power in the third set. The game kept tight until 4-4. Italy started to play more aggressively again and took a three-point lead at 8-5. However, the turning point of the set came at 13-12 when France took over control. Italy fell behind 15-18. Mencarelli sent in Indre Sorokaite and Cristina Barcellini. However, it was already too late as France never looked back (25-20).
Marco Mencarelli put his trust again in Valentina Diouf and was not deceived by his players. The Italians swiftly found back to their performance of the first two sets by improving their serves. Wing-spiker Carolina Costagrande did a great job on the outside and increased the Italian lead rapidly to 16-9. France tried to bounce back, but had no answers to the powerful Italian game in the end.

Over 5,500 spectators came to watch their Swiss national team against Belgium. Svetlana Ilic’s players showed a strong performance in the first set, keeping the score close. The crowd romped as the Swiss national team took a first lead at 5-4. The two teams fought bravely for every ball and knew no mercy. Belgium’s middle-blocker Freya Aelbrecht and Lise Van Hecke put enormous pressure on the Swiss defence. The “Yellow Tigers” took command of the match by increasing their lead to 16-11. The Swiss tried their best to shorten the deficit, but the Belgians never looked back until 25-21.

The Belgians took the flow from the first set into the second one (8-2). Even though the “Yellow Tigers” experienced some problems in reception, they capitalized on many errors in the Swiss offensive play. The Belgian blocking system worked as Swiss clockwork, helping Gert Vande Broek’s team increasing its lead to 16-4. The Swiss players never gave up but were finally not able to catch up their opponents (16-25).

The local heroines had to find an answer in the third set. And they did. The Swiss worked their self up into a real frenzy. Wing-spiker Inès Granvorka and opposite Mandy Wigger put a lot of pressure on the Belgian defence to move the scoreboard forward in their favour. However, a 21-17 lead was not good enough for Switzerland to conclude. Vande Broek sent in Hélène Rousseaux to stabilize the Belgian game. Moreover, captain Charlotte Leys and Lise Van Hecke played at their best to offer their team a hard-earned 3:0 win against a brave Swiss team.