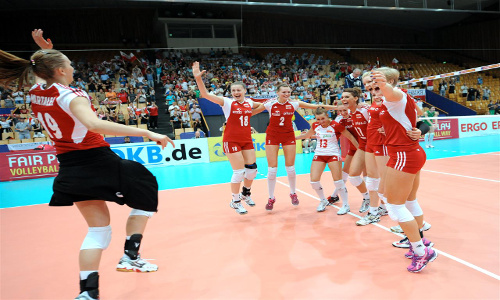 Bulgaria took the initiative right from the beginning displaying great defensive skills and leading quickly with 6-2 but Poland answered promptly with a 5-0 run to retake the lead at 7-6. The ladies from Poland increased their pressure on Bulgaria with fast and powerful play scoring several block points at that stage of the set. Italian coach Marcello Abbondanza of Bulgaria reacted quickly using a timeout to break Poland’s flow. His plan was successful because his ladies accelerated their game to retake the lead with a 6-0 run (17-12). Poland turned the tables themselves by having an 8-0 run to retake the lead in a top-level match (21-22). In front of standing ovations by a great number of Polish fans the ladies from Poland grabbed the first set with great enthusiasm (22-25).The second set started off with the same high-level volleyball as the first ended. Both teams made almost no mistakes keeping the score within a 1-point gap until Bulgaria used a few good serves to take the lead at the first technical timeout (8-6). Bulgaria even managed to extend their lead until the second technical timeout displaying tremendous blocks and a fast-paced play (16-12). Bulgaria continued to dominate the set playing variably and forcing Poland to quite a few mistakes. As a consequence Abbondanza’s ladies used their first set point to tie the game 1-1 (25-18) with 7 points added by wing-spiker Dobriana Rabadzhieva.Poland reacted strongly at the beginning of the second set taking an early lead with an amazing blocking game (0-6). Bulgaria did not find a way to stop the almost perfectly playing Polish ladies who dominated clearly offensively as well as defensively midway through the set (5-16). Poland played the rush and won the third set champion-like with 25-13. Skrowonska-Dolata of Poland led her team with 5 break points out of a total of 7 in set 3.The Polish power did not let down at the beginning of the fourth set leading quickly 8-6 at the first technical timeout. Bulgaria found no answer to the powerful game of the Polish squad that accelerated their game throughout the entire match, displayed by a 19-12 lead late in the set. In the end, Poland impressively rushed through the fourth set dominating Bulgaria in every aspect of the game using its third match point to a unquestioned 3-1 victory.

Both teams started very concentrated into the set scoring several direct points in the first few minutes. Serbia took a 2-point lead at the first technical timeout and showed more assertiveness at this early stage of the match (8-6). The ladies from Serbia extended their lead to a 5-point gap with powerful play from their wing-spikers until the second technical timeout (16-11). Middle Blocker Natasa Krsmanovic led her team with strong blocks contributing 6 points to an undisputed 25-21 in the first set.In the second set the Czech team started off with more force and claimed an early 7-3 lead over surprised Serbians who countered with great effort and excellent defence to tie the game (9-9). However, the Czech Republic found back to their strengths and retook the lead putting Serbia under more pressure at the second technical timeout (15-16). With all their experience Serbia took charge again displaying great defensive skills to grab also the second set (26-24). Opposite Jovana Brakocevic dominated the set contributing a total of 9 points with her powerful attack.Also in the third set the Czech team started off well to grab the first lead by excellent blocks and defensive play (6-8). This time the team continued to keep the lead because of good organization until Serbia tied the game at 20-20 willing to take the win in 3 sets. In the end Serbia showed more cleverness than its opponent using the third match point (25-23).