EuroVolley: Russia got a medal out of Turkey’s head. Sborna in semis! 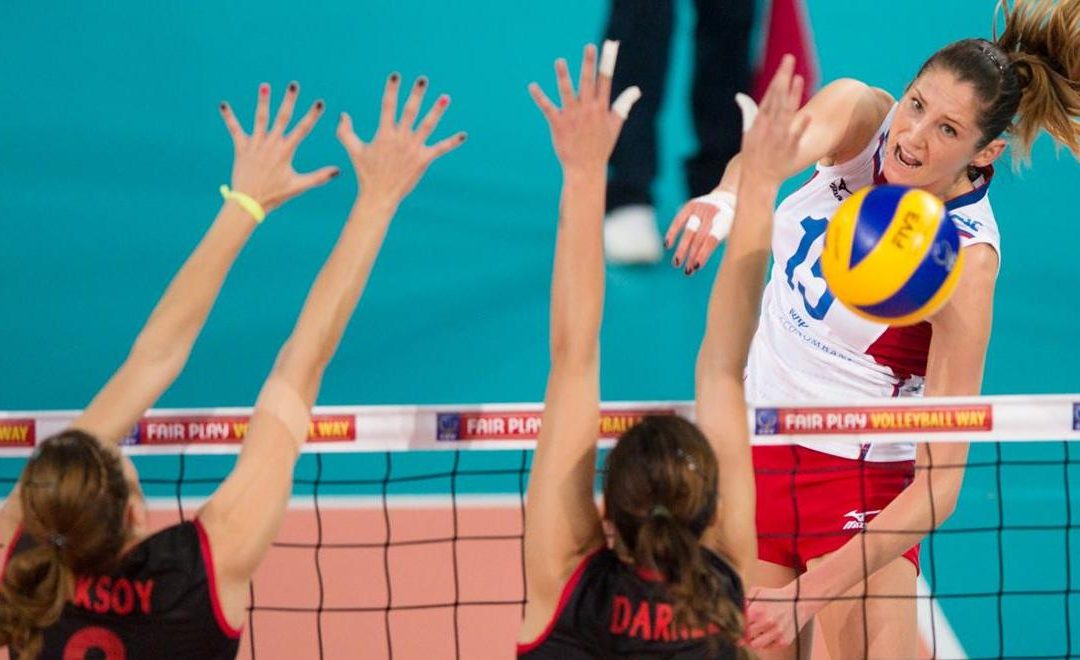 Turkey will not repeat its success (bronze medal) at European Championships, achieved in Serbia two years ago after easy failure against Russia. Sborna totally took control over this quarterfinal already in the second part of the premier set not giving it away until the end and booked a spot in the semi-final. The key player turned out to be Tatiana Kosheleva, who was solving almost all vital actions.

Turkey jumped out with an excellent start and gained a led 8-4 til the first technical time-out. Neslihan Darnell was unstoppable and reached three points at the beginning of the first set. But an outstanding six point run by the Russian Team turned the tables to 10-8. Now Turkey had trouble in the defense and failed in the opponents block time and again (16-12).The team of head coach Yuriy Marichev raised the score to 24-20, an ace by Anastasia Shlyakhovaya ended the first set.

The difference made the duel at the net, which Russia led 8-4.The fans saw a hard fought at the opening of the next set (7-7). Turkey tried to control the game out of a burst of speed in attack and accomplished the move over Neslihan Darnel who realized 7 points in the second set. It was the game plan to overcome the Russian block of three. The strategy came together and gained a three point lead for the Team of head coach Massimo Barbolini (17-14). It seemed that Turkey felt confident at the final phase, because more and more unforced errors defined their game in the sequel. Russia exploited it to a 10-6 run at 24-23. Again a Russian block made the difference and took on the 2-0 for the East Europeans.

In the third set Turkey set the pace and gained an early 10-4 lead. But the crowd saw exactly the same course of the game like in the previous set. Russia dominated in block and attack and went up to a small 18-17 lead. Especially Tatiana Kosheleva offered a smart game play and surprised the Turkish defense often. However Russia went up to 24-19 and cared out of a straight win over the candidate for a medal. Nataliya Obmochaeva booked the ticket for the final round with a merciless ball and started a Russian party on the court.

Turkey head coach Massimo Barbolini: “I think Russia deserved the victory. I´m disappointed, because we didn´t played a match like we imagined it before. Good luck for the Russian Team in Berlin, they can arrive the final.”

Turkey captain Neslihan Darnel: “Russia played very well. I think it was a very close game until the middle of all sets, but we made to many mistakes in the end. It was a good experience for us to play against a team like Russia, but of course it was our goal to go to Berlin.”

Russian head coach Yuriy Marichev: “I would like to say thank you to our players. They implemented my plan, because Turkey is a very strong team. They key to success was our good preparation. I saw it in they eyes of my players, that they want this victory today.”

Russia captain Ekaterina Pankova: “I´m happy, because Turkey is a difficult team. Before this match we worked very hard for this victory. Of course we are expect a hard fight in Berlin.”