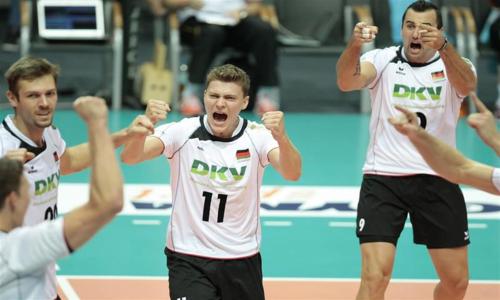 Russians might have arrived at the Baltic shores of Gdynia in Poland with a high spirit due to their favourites status, but they surely suffer from a certain syndrome, evinced sometimes on the first days of big tournaments. Sbornaya was lectured by a brave German team in the opening game of Pool D, whereas Bulgaria was too strong for their Czech opposition in the later game.

Andrei Voronkov stated at the pre-match press conference yesterday that Russia is not going to repeat the mistakes from the 2013 World League Finals in Mar del Plata. There the reigning Olympic champions underestimated the Canadians in one of the group games and had work hard to guarantee themselves a spot in the semifinals. However, this syndrome, or rather an aristocratic attitude often shown towards allegedly weaker teams, was also present today in “Widowiskova” sports hall. Russia looked totally unmotivated and clueless compared to the team that demolished Brazil in three sets in the World League final a couple of months ago. I decline to believe that Voronkov has not prepared his squad carefully. On the contrary, maybe Russians were indeed too relaxed and did not expect such a game.

Gyorgy Grozer has joined the training camp of Vital Heynen‘s team for the beginning of the Euro Volley preparation and the latest friendly results proved that Grozer’s Germany will not pass unnoticed through Pool D. The two recent victories over Italy, including a scary 3-0, acted as a flag bearer to the Bundesteam’s stunning victory today. Starting the game with two surprises, the setter Kampa and the middle blocker Broshog, Heynen managed a very organized team, whose leader and bombardier Grozer came in fresh after a summer break to help the other two attackers Kaliberda and Fromm, who both enjoyed a great World League.

Tomorrow’s game Germany vs. Bulgaria will answer an interesting question, though. The Bundesteam has been showing a very specific weakness over the years, being unable to keep their momentum. Often after an amazing performance, and we’ve witnessed some under the guidance of Heynen, they seem to make unreasonably many mistakes on the next day and somehow fail to maintain that great impression of a potential medal candidate. While the three points taken from Russia today almost certainly and safely put Germany on the playoffs berth, the clash with Bulgaria will show whether today was just a step towards something bigger awaiting them.

For Russia and all its stars, who Voronkov kept rotating in vain against Germany, the game against the Czech Republic is a must, for there is also Bulgaria on the list on Sunday. 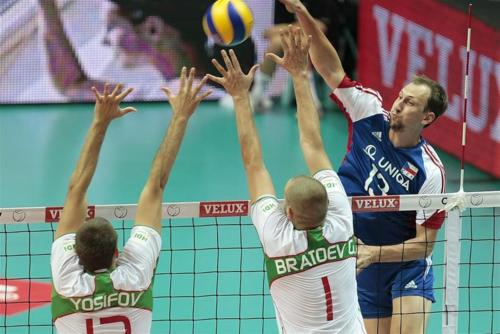 One of the most arduous decisions Steward Bernard had to make as a head coach of the Czech national team was to choose his starting opposite. Some teams might suffer exactly in that particular position, but this is not the case for Bernard, who has Jan Stokr, David Konecny and Filip Rejlek to select from. Rejlek was eventually dropped from the Euro Volley list, but the dilemma between Stokr and Konecny remained. Unwilling to lose attack power by keeping either of them on the bench and with the retirement of notable Czech receivers, such as Peter Platenik and Jiri Popelka, as well as with the absence of the promising Karel Linz, Bernard took an innovative decision to place Stokr on position four. Struggling with his new role, the new signing of Dinamo Krasnodar in the Russian Superleague could not show his potential during the summer friendlies and was obviously having problems today. Bulgaria did exploit that as much as possible and, as expected, it gave results. Konecny’s efforts in attack were not enough and the late substitution of Kamil Baranek, whose starting position has been lost due to Stokr’s transformation, could not contribute more than a consolation set against a very inspired Bulgarian side.

Despite the win, Camilo Placci‘s lads have a few things to worry about. Captain Todor Aleksiev emphasized on the troubles at the press conference: “We can’t make the big mistake which we made today – when you are leading 2-0 you can’t let your guard down.”