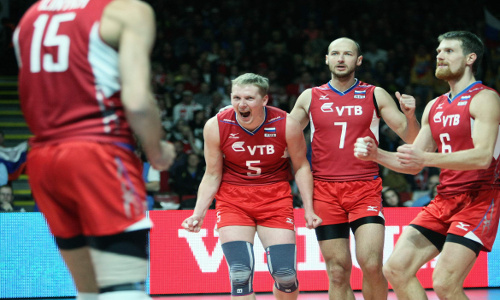 Russia got off to a very good start (8:4) and had widened their lead up to five points as Italy mentor Mauro Berruto asked for his first technical time-out (10:5). The Russian machine nevertheless did not stop scoring (14:6) and similarly to what had happened in their semifinal with Bulgaria, Italy was evidently struggling to find their way into the game. This time, however, the task was even more demanding for the “Azzurri” as the reigning Olympic champions were standing on the other side of the net. Ivan Zaytsev, the son of 1980 Olympic gold medalist Vyacheslav (then playing for the Soviet Union), killed a spike from the back row to claim the eighth point for his side, an action that was loudly celebrated by the many fans in attendance at Parken stadium. Still Russia was comfortably leading the way at the second technical time-out (16:8) and apart from their always terrific blocks was showing great skills also in defense. However, it looked like Italy was also gradually finding their best play, especially after two consecutive blocks and an ace by Zaytsev reduced the gap to four points (18:14) to compensate for such disastrous start. It was nevertheless already too late to keep alive the hopes to turn things around and Russia pocketed the opening set at 25-20.

Italy was certainly hoping to prolong their positive trend for they had won each of their last three matches in the tournament coming back from one set down but Russia was once more quick off the blocks also in the second set (3:0). With the audience standing on their feet and the perfect ambiance for the final showdown of the European Championship, Russia claimed a very long and spectacular rally to make it 7:3 and their show continued as they called for the first mandatory stop leading by five points. Italy team captain Cristian Savani – who missed most of the Championship due to a knee injury – replaced Zaytsev in an effort to stabilize the defense line but Muserskiy showed no mercy at all and almost hit Simone Parodi on his face to make it 10:3. Russia’s rhythm was just impossible to stand even for Italy even though the “Azzurri” were playing with glowing hearts (16:10) but ultimately they found their way into the game fighting back with a terrific 7:2 run to re-open the fate of the set as their young opposite Luca Vettori (22) was on fire. The game was briefly stopped – for three minutes – by the score of 19:17 for Russia as a result of a black-out at Parken stadium and once the actions got started again, Vettori finished a very exciting rally to reduce his side’s gap to a minimum (20:19). At 21:19 everything was set for a very exciting final rush; Muserskiy stopped Simone Parodi for the 23:20 but Emanuele Birarelli responded in a similar fashion to keep Italy’s hopes alive. Another block by Muserskiy prompted three set balls for Russia with the second cashed at 25-22.

After a very close race up to 5 all, Italy got a small break going up 11:8 with the audience going just crazy as all fans wanted to enjoy more world-class Volleyball and did not seem to agree with the scenario of a straight win for Russia. Even if you had bet on a Russian win at bookmakers.co.uk you did not want to see the end of game after three sets. Nikolay Apalikov restored the balance for Russia at 15 all but Savani scored the next rally to call for the second technical time-out with Italy taking over the lead though only by the slimmest margin of all. Taken by the hand by their rising star Luca Vettori who kept on scoring mercilessly, Italy left the door open for a fourth set (23:20) and even forced Russia’s mentor Andrey Voronkov into a time-out. Thomas Beretta piled up three set balls for Italy, the first was gone after an error by Savani, but Italy kept alive their dreams of glory as Dmitriy Ilinykh served long (25-21).

Italy looked regenerated by this win and was able to stand Russia’s pressure also in the early phases of the fourth set before the 2012 Olympic champions got a small lead (8:6) by the time the first mandatory stop was called. As the game resumed, Russia showed their superior class with the always outstanding libero Alexey Verbov and the great spikes killed by Nikolay Pavlov and muscle-bound Evgeny Sivozhelez (11:7). Muserskiy was also doing a great job at the net and halfway through the fourth set it looked like Russia was going to cash yet another gold medal to follow up on those claimed at the London Olympics and this year’s World League Finals (15:10). Though Italy mentor Mauro Berruto attempted a late surge by replacing Vettori with Zaytsev – who was by this moment of the game playing as opposite after starting as wing-spiker – Russia continued to score point after point (22:14) helped also by a series of mistakes made by the “Azzurri”. The end of a memorable Championship co-hosted by Denmark and Poland was almost there and the last point was sealed by Nikolay Pavlov (25-17).