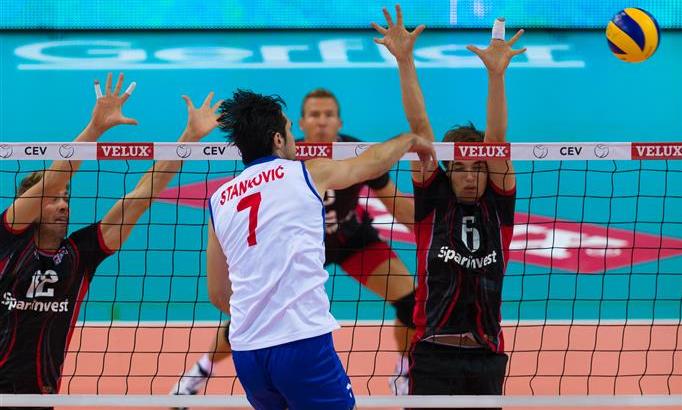 The beautiful dream of Danish national team at EuroVolley 2013 comes to an end. Denmark found a conqueror in the form of Serbia on the playoff three struggle and says goodbye being ranked on places 8-12. The defending champion doubtless saved a lot of precious energy, which will put good use tomorrow playing against Belgium in quarterfinal.

Serbia controlled the offense with hard spikes on the Danes and got a 9-3 lead with a hard spike down the middle. Denmark’s coach Fred Sturm asked for a time-out but Serbia did not slow down and easily took the set 25-17.

The Serbian offensive continued to diminish the Danish hopes to cause another sensation in the tournament with Marko Podrascanin hammering down points, but the spectators backed up their guys regardless of the score. Serbia eased into 4-1, 9-4 and 16-9 leads and the Danish heroes seemed to have met their match. Mads Ditlevsen tried to keep his team in the game, but Serbia proved too strong and took a commanding 2-0 lead winning the set 25-17.

Third set and Denmark seemed to find their game. At 7-7 the spectators got as loud as ever. Serbia kept cool and Ditlevsen’s efforts were in vain. Serbia pulled ahead but suddenly the Danes came back, good spikes from Peter Jensen and Kristian Knudsen kept Denmark within striking distance at 19-23. Denmark went on to save three match balls to the crowd’s delight before Serbia took the set and match 25-22 to play Belgium in the 1/4 finals.

Home hero Mads Ditlevsen was the top scorer of the game with 15 points. “Unfortunately we played our worst game of the tournament today and even though we are thrilled to reach the Playoffs I stand here with mixed emotions” he said. “First of all it was amazing to play here in front of all these spectators that went on to sing the last of the national song without music and that gives me goose bumps just thinking about it. Our service game was not good enough today and Serbia received our serves too well today”.

The European Championships has nevertheless been one big positive experience for the Danish team: “These championships on home soil have surpassed our wildest expectations and it was even bigger than we expected when we were told three years ago that Denmark was hosting this competition. The organization behind the Championship plus the excellent spectators and the big attention from the Danish media has made this a giant experience for the entire team”.

Igor Kolakovic, head coach of Serbia: “We took the match against Denmark seriously and even though Denmark is not one of Europe’s strongest teams they played with heart and the great backup of their spectators. Denmark deserved their place in the Playoffs matches. I am very happy that we made it to the quarterfinals against Belgium. It’s a big game and the most important in the tournament because if we win we have two opportunities to go for a medal. It will be a difficult game because Belgium has a lot of both young and experienced players and won against Italy in the last match. We will see what happens and I hope we are going to the Final Four”.