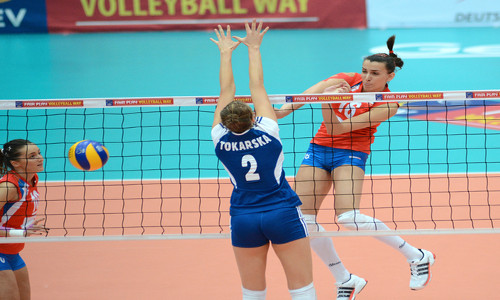 Serbia started the first set with enormous determination leading quickly 5-2 against a nervous Polish team. Zoran Terzic girls increased their lead to five points until the second technical timeout displaying tremendous organization against a struggling Polish team (11-16). Serbia never let down and took the first set undisputed after a five-point run in the end with 25-18. Serbian key player Jovana Brakocevic stood out with 6 points including 5 break points.At th beginning of the second set Serbia continued to dominate the game with their powerful wing-spikers. However, Poland now showed why Serbian coach Terzic had great respect for the Polish squad prior to the game. They acted with more assertiveness and were able to close the gap to Serbia to one point (6-7). Serbia managed to hold off Poland within a gap of four points by concentrated and forceful play. In the end, Poland did not find an answer to overcome the Serbian pressure and also lost the second set (18-25).

Also in set three Serbia left no doubt that they had full control of the match carrying a two-point throughout the first half of the set (10-12). Poland showed great team spirit and carried by hundreds of Polish fans they managed to grab the lead (14-13). Poland now played their best volleyball and extended the lead to four points (21-17). Under standing ovations by a huge Polish crowd they finally grabbed the set in heroic fashion (25-22). Top player for Poland was Kinga Kasprzak with 7 points including 5 break points elevating her team to another level at that stage of the match.Serbia took charge again at the beginning of set four but the Polish girls turned things around taking the lead at the first technical timeout (8-7). Serbia reacted quickly using a five-point run to retake the lead at 15-10. Poland could close the gap but in the end Serbia used all their experience to score an undisputed victory with top-level volleyball (21-25).

Bulgaria started off well with great blocks taking an early 8-2 lead at the first technical timeout. The Czech team did not find an answer at that stage of the match to the quick and variable game by the ladies from Bulgaria who led with 8 points at the second technical timeout (8-16). With tremendous effort and superb defensive play Bulgaria took the set 25-14 with Elitsa Vasileva contributing 6 points including 5 break points.

In the second set the team of Marcello Abbondanza continued where they had left off, dominating in most aspects of the game and leading a struggling Czech team by 4 points at the first technical timeout (4-8). After a five-point run the Czech ladies retook the lead displaying great spirit to overcome the upset of the first set (11-10). The set stayed close between two good teams until the Carlo Parisi’s team took charge late in the set with a five-point run to win it 25-20. Dominating player for the Czech team was team captain Aneta Havlickova with 10 points including 7 break points.

Bulgaria took the early initiative in set three leading the Czech Republic by 4-2 but after a four-point run the table was turned in favour of Bulgaria again (4-6). Both teams acted very concentrated throughout the set so that no team was able to increase a lead to more than two points. Bulgaria showed more cleverness in the end grabbing the set after long rallies with their fifth set point (29-31).

After an exhausting third set the Czech team came out more aggressive to take an early 6-2 lead at the first technical timeout increasing the lead even to seven points at the second technical timeout (16-9). The Czech ladies found to their game dominating Bulgaria especially in defensive play to tie the match with their second set point 25-19.

Bulgaria had the better start in tie-break play taking an early 5-1 lead after long rallies and exhausting defensive play. The Czech Republic managed to come back with great moral to tie the game at 8-8 and even win a very close match with 3:2 (15-11) after 2 hours and 14 minutes.