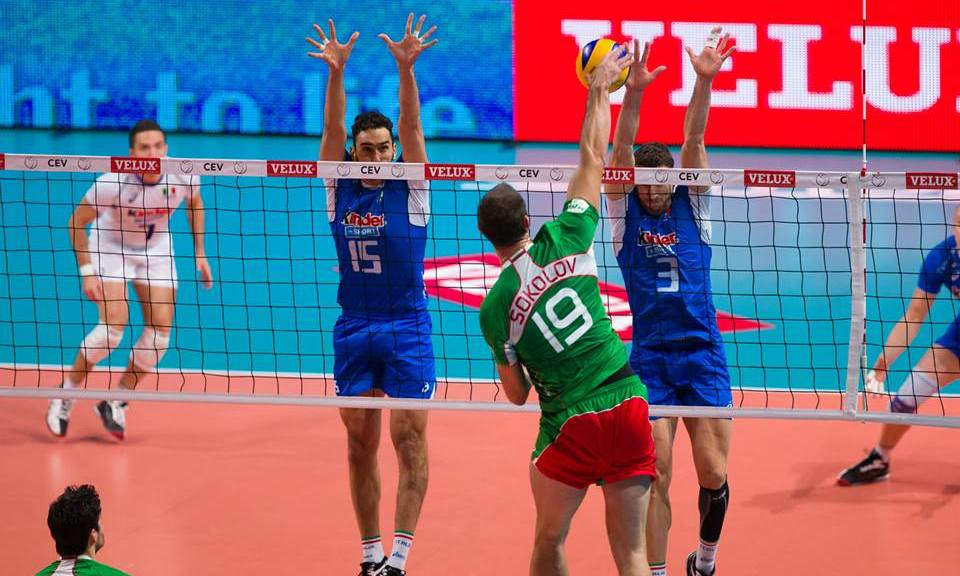 There was lived up to the most pessimistic scenario for Bulgarian fans and first of all Bulgarian national team. Italy managed to dump up Tsvetan Sokolov as a result “Azzurri” beat Bulgaria and checked into the final of EuroVolley 2013, where Russia already is waiting. It will be a second row decisive game for Italians, which bid is the European Championship. Two years ago in Vienna, Mauro Berruto’s giocatori were defeated by Serbia.

With thousands of fans in attendance at Parken stadium, Bulgaria and Italy were supposed to prolong their rivalry dating back to the bronze medal match of the 2012 London Olympics and whose next chapter was written this past summer as these teams had crossed their ways once more in the match for third place at the World League Finals in Mar del Plata, Argentina. With Italy having claimed both of these matches, Bulgaria this time really wanted to go for a medal and it got off to a very promising start making it 3:0 in only a few seconds. Italy, on the other hand, though their captain Cristian Savani was back in action for the first time after suffering a knee injury in the opening game of the tournament against Denmark, was struggling to find their way into the game and trailed 2:8 (!) by the first mandatory stop. Bulgaria did not stop killing terrific attacks and their lead had widened up to nine points shortly before the second technical time-out (14:5). “Tsetso” Sokolov and Todor Skrimov were performing really strong and even though Italy head coach Mauro Berruto had replaced Ivan Zaytsev with Simone Parodi, he still could not stop Bulgaria’s run (19:10). As the set progressed, the bronze medalists from the London Olympics could gradually improve on their sloppy start (22:15) well supported by their young opposite Luca Vettori but the set was already gone and Bulgaria could cash the 1:0 with a spike killed by Todor Skrimov (25-19).

Italy opted for the return of Zaytsev in the second set with Savani not retained on the starting six and a winning serve by Simone Parodi prompted a 4:2 lead for the “Azzurri” as well as a time-out by the Italian-born mentor of Bulgaria, Camillo Placi. Middle-blocker Emanuele Birarelli – one of the most experienced players in the group and a multiple club world champion with the likes of Diatec Trentino – did score a couple of points and Zaytsev was also step by step finding his way into the game (6:3) but Bulgaria clawed back to level the score at 6. A neck-to-neck race followed until Bulgaria got a margin of three points (14:11) halfway through the set. Italy was nevertheless able to fight back once more and made it 15 all on an ace by Vettori. The teams exchanged the lead back and forth and Bulgaria got to the front at 22:21 after a decision by the first referee was overruled by exploiting the video challenge system. A serve error by Sokolov and a block killed by Parodi did flip the charts around once more with Italy going up 23:22 and Zaytsev showed excellent skills in defense before Vettori finished the rally for a double set ball. Italy cashed the first opportunity to the delight of their many fans at Parken stadium as Zaytsev served strong to make things difficult for his opponents who committed a fault at the net to seal the final 25-23 for Italy and the provisional 1:1.

Italy was a distant copy of the shaky team seen in the opening set and started out strong also in the third section of the game (5:3) showing good defense and a very consistent performance also in blocking (8:5) so that Bulgaria’s spikers found it more and more difficult to find a way through the Italian wall. The “Azzurri” accelerated the tempo of their game while Bulgaria – including their major star Sokolov – was making error after error thereby paving the way for an impressive 12:6 Italian lead. Sokolov even left the court to be replaced by Danail Milushev but Italy looked in full control of the game at the second technical time-out (16:10). The many Polish fans who had found their way to Copenhagen created a great atmosphere at Parken stadium though their heroes were not starring in the final weekend but they also enjoyed the great actions displayed by an Italian side that showed great confidence while widening their lead up to nine points (19:10). A terrific serve by the “Tsar” as Ivan Zaytsev is nicknamed in his home country set the score at 22:12 and Thomas Beretta followed up to close the next rally before Simone Parodi exploited the second of many set balls to make it 2:1 for Italy (25-15).

With the only exception being their straight win over Denmark and their defeat to Belgium in the last round of pool play, Italy had always fought back from one set down in all other matches of the 2013 CEV VELUX EuroVolley. Was the semifinal match with Bulgaria going to continue this trend? The stats of the third set showed the clear supremacy of the Italians with 65% in attack vs. only 36% for their opponents and the start of the fourth set was quite promising (4:1) for the silver medalists from two years ago in Vienna. Still it was too early to relax for Bulgaria stormed back to make it 5 all and then with Sokolov claimed the lead at 7:6. Bulgaria had a margin of one/two points before Italy could restore the balance at 14 all and even move up 16:14 on three errors by their opponents. Luca Vettori – though only 22 and debuting this year at the European Championship – was just outstanding in all of his actions and at 19:15 Italy could start glancing at the finish line. Ivan Zaytsev added another ace to his personal tally to get the next point for his side and after a very sloppy start everything looked quite easy for Italy by that stage of the game. Their head coach Mauro Berruto had nevertheless to stop the game as Bulgaria had clawed back to -2 (22:20), Parodi got the message and scored the next point for his side, but Bulgaria was still there (23:22) ready to exploit any laps of their rivals. The spectators were standing on their feet at this stage, Birarelli blocked his teammate in Trento Sokolov to pile up two match balls for Italy, and the party for the guys in blue jerseys got started as Vettori killed the next counterattack (25-22).

“Today we once again started slowly as it happened against the Netherlands and Finland and today maybe it was the most awful set we had in the tournament, but I have no words anymore to tell about how proud I am of my players” said Italy coach Mauro Berruto. “Once again we had to change the starting six but the players have a marvelous attitude about that. I think we played our best three sets in the tournament from the second set today and that is what we can pack in our bags for tomorrow. We arrive here through difficulties but playing our three best sets today. We are not the favorites and we play against a huge team. Russia has everything to win and we have to know that we have to resist, resist and resist again and I think we are ready to give it a try”.

“Congratulations to Italy for their win. We tried to win the game but in the important moments we could not get the points and Italy was able to profit from the situation. Now we have to clear our minds on what happened today and think about how we can win tomorrow’s game. A medal is always worth fighting for” said Bulgaria mentor Camillo Placi.