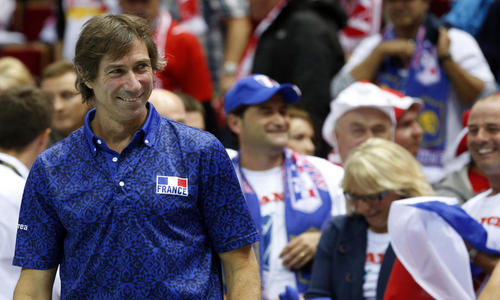 Having finished on top of the charts in Pool B, France could eventually not make the semis of the 2013 CEV VELUX EuroVolley following their defeat on Wednesday evening to 2012 Olympic champions Russia. “Les Bleus” did still finish their campaign in fifth place thereby qualifying for the next edition coming up in two years in Bulgaria and Italy.

The match with Russia was very close but France eventually lost 1:3. “It was a very close game and even though we played very good in the second set that was not enough to make the semis” says France mentor Laurent Tillie. “Russia is a great team and yesterday they did play really good, especially in defense”.

“We definitely got to play an opponent that is stronger than us” adds Julien Lyneel. “They deserved to make the semis even though for us this is a huge disappointment. We played good but still not good enough to stand the reigning Olympic champions. They played superb Volleyball in every single fundamental. It is very hard to spot any weakness in their play. Unfortunately after this loss we are out of contention and have to travel home”.

Actually there are still many positives to take from this European campaign where France beat Turkey, Poland, and Slovakia in the prelims to top the standing in Pool B and make the 1/4 finals thereby skipping the Playoffs. “This Championship started really well for us” Tillie says. “We won the group and made the 1/4 finals but we knew that starting from that stage every single game would have been extremely difficult”.

“I think that with Russia our weak point was the side-out. We defended well but we could not finalize many of our counterattacks” adds Lyneel. “This was particularly evident in the third set where we touched many balls with our block but then could not finish it off and bring the rally home. I think that this is the main reason for our defeat to Russia”.

The members of France national team did enjoy the tournament and the great atmosphere created by the Polish fans at ERGO Arena in Gdansk. “The ambiance was just great especially for the game we played this past Saturday against Poland. It is amazing to see how many people follow our sport in this country” says head coach Tillie. “The European Championship in Poland was a great experience for all of us, especially when it comes to the audience and the atmosphere we got to feel during the matches. I think the people did also enjoy world-class Volleyball these past days here in Gdansk”.