Friedrichshafen back to life after a slow start 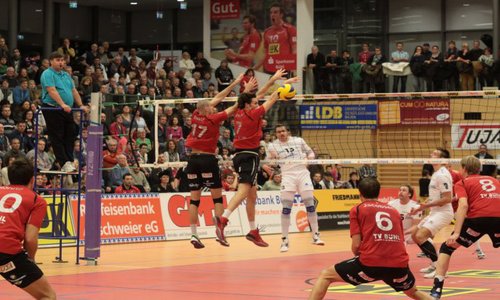 For less than two months after the launch of the new Bundesliga campaign we have witnessed changes of leadership and some interesting outcomes in one of the league’s most balanced periods. There is no clear favourite in the current standings as every team has failed to keep an immaculate record.

We emphasized on Stelian Moculescu‘s selection in our season preview. It was only a matter of time before Friedrichshafen found a more convincing game rhythm. A second-round defeat in Buhl was followed by a home upset against the usually challenging opponent Generali Unterhaching in the second half of October. Moculescu’s lads had little luck with the program since they had to face all their major rivals early in the season. To make matter worse, VfB suffered two very unpleasant Champions League losses, including a 2-3 at home against ZAKSA Kedzierzyn-Kozle. In order not to find themselves in trouble before things get serious, the players switched gears and enjoyed a perfect November. The back-to-back champions from Berlin left the Bodensee region helpless, having lost in straight sets in what seems to be VfB’s best game so far. Another 3-0 against Galatasaray at home gives the Romanian-born specialist hope for the Playoffs and for a longer domestic winning streak. As far as his roster is concerned, the head coach has the variety that has been missing for some time. The only waste seems to be the relatively little time Christian Duennes spends on court, but someone had to be sacrificed with all the summer newcomers.

Unfortunately, the difficult financial times and the uncertain future of volleyball in Unterhaching have been more discussed than the local team’s performance. The weakened squad is still doing great in the Bundesliga. A very important straight-set win in the otherwise inhospitable Buhl this weekend puts Haching on the right track. The tie-break battle they won in Friedrichshafen in October is another positive sign of spirit in times of crisis. The club management is desparately trying to find a major sponsor till the end of 2013 after Generali’s volleyball recess. Whether they will make it or not, whether one of Germany’s most emblematic clubs is going to live through is a matter of interest right now. 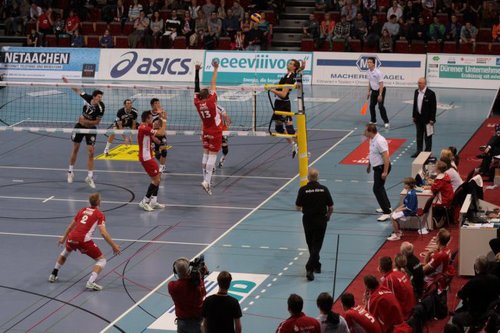 The defending German kings Berlin Recycling Volleys have been having a relatively quiet campaign so far. evivo Dueren turned out to be the pleasant surprise of the season when they topped the ranking, following a 3-1 success at home namely against Berlin. Mark Lebedew‘s crew did fine in Europe as they survived three consecutive away games to remain in possession of Playoff chances. The new middle blocker Srecko Lisinac fit the team pretty well, but his teammates seem unable to find the right motivation yet.

The 204-cm-tall Chilean opposite Sebastian Gevert has established himself as a leader for a another year in Dueren. He helped his team stay atop till mid-November before two straight-set disappointments versus Friedrichshafen and Ingersoll Buhl.