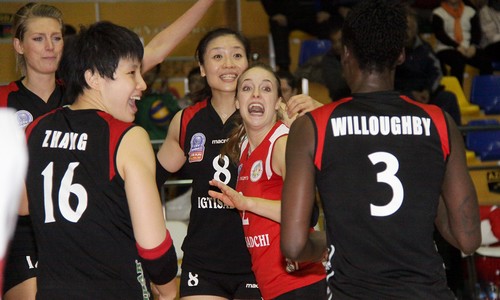 Home team starts well, but the hosts impact soon.The set goes, but no one can run away. In the second half of the set something changes and Igtisadchi takes a big advantage by Zhang Lei’s and Flier’s spikes and hosts’ errors, but in the end reception troubles help the Serbian team to stay in the set.

On the 27-27 Igitisadchi reception line falls apart: there is at first an ace on Willoughby, then after a bad pass by Zhang Lei the girls watch each other letting the ball fall. 29-27 for Crvena Zvezda.

Second set starts like the first one, Igtisadchi running fast and Crvena Zvezda coming back, but this time the Azeri team plays on high rhythm, especially when Wei is on service, and doesn’t leave any hope to young opponents (14-6). Reception helps the Chinese setter to go to the middles, giving hard moments to the Serbian blockers. Flier ended the set by her service, but the Queen has definitely been Wei, who has also showed two amazing shots in the corners. Easy 25-13 for Igtisadchi.

Third set shows how strong Igtisadchi is when Wei can go to her middles, especially the national mate Ma. The setter finds the good feeling with Willoughby, making her be a factor the the victory of this set. Another easy 25-13 for the Azeri girls.

The same happens in the fourth set, where Igtisadchi level keeps growing and Crvena Zvezda has been
swept away 25-12.

Both teams missed part of their starting players. Igtisadchi had to play without team capitan Wilavan Apinyapong and the other Thai players (Thinkaow, Buakaew and Sittirak) who are with their National Team. On the other side coach Pavlicevic gave a chance to play to some back up players. Both teams showed weak reception, especially in the first two sets, then Igtisadchi was a little bit better and that’s why they won easy. The only strong performance on reception came from Lenka Durr, outstanding with her 76% of perfect reception. On azeri side all the spikers were good as scorer and had a good spike efficiency, just Willoughby was a little bit lower than her mates. Wei’s distribution was great, so we can have Flier and Zhang with 18 points, Ma and Willoughby with 12 and Fersola with 11. On the other side Adela Helic scored 20 points, but she was almost alone for the whole match and no one from her team helped her.

MVP of the match is Qiuyue Wei: she played really consistent, making her mates give their best; at the beginning of the match she could find the right feeling with Willoughby, but she fixed it during the match. She showed all her talent and made the people watching have fun with some smart shots in the corners.