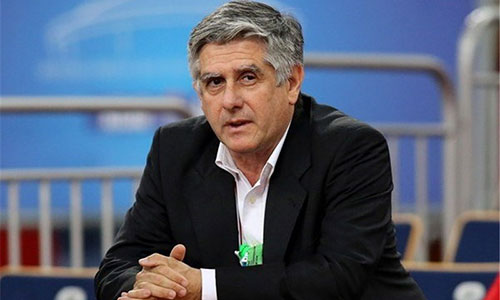 At last Iran volleyball federation formally announced that Raul Lozaon is going to seat behind the helm of senior men’s team and Juan Cichello his fellow countryman will help him as the assistant coach.

The senior men’s volleyball team of Iran under coaching of Slobodan Kovač had weak performances during the international events in the current year especially in the world cup games.

Since 1964 while volleyball became one of the Olympic disciplines it is a dream for Iran volleyball to take a birth to the Olympic Games. Dr. Davarzani president of Iran volleyball as the first responsible guy is anxious more than anyone about going to the Olympic of Rio. He tried to find the best solution for the problem. He had several consulting sessions with experts of volleyball, and then had two formal meetings with Kovač. At last he reached to this decision that the best way is having a powerful coach for the team.

There were some names as candidate for becoming head coach, surveying their experiences and talking with them was essential matter for coaching an evident probable. On 8th November  President  Davarzani dispatched Afshardoost  the Secretary General and Amir khoshkhabr team manger  as his representatives to Poland, for visiting Andrea Anastazi, Lozano and Cichello. They returned and gave a report to the president. By passing the time, participating in the qualification games of the Olympic in Japan is so important for Iran. So Davarzani decided to hold an extraordinary meeting for the Board Directors regarding choosing the head coach. The matter of nominating new head coach is very important and has got high superiority.So last Friday November 13 while it is a public holiday and week end in the evening the session was hold, then President Davarzani flew to Riyadh of Saudi Arabia for participating at the 21st AVC (Asian Volleyball Confederation) General Assembly. Hours ago it was announced that he has appointed Raul Lozano as the head coach. Iran volleyball in left short time is going to prepare his team for qualification matches of the Olympic which will be leld in Japan. For more than half century Iran is waiting to participate at the Olympic Games and it is a dream for volleyball of Iran. We hope this dream will come true by Lozano and Cichello  respectively as the head and assistant coach.

Dr. Davarzani said:” We are thankful to Kovač and appreciate his two years work for volleyball of Iran. We would have done some alks with him for termination of his contract in a professional way.”