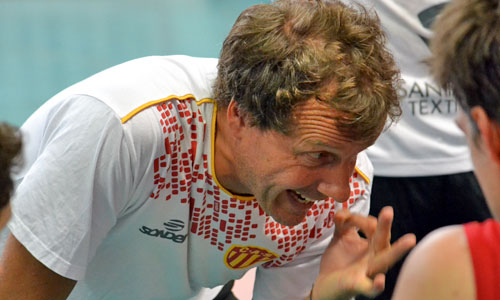 Former National Team’s assistant fired the alarm without saying names. On his Twitter account he made public controversial thoughts about the present of Argentina.

Juan Manuel Barrial is a man with long experience in Argentine volleyball. Many years in the major leagues, opportunities to manage the National Team and brutal honesty to talk in a delicate moment of Javier Weber’s squad.

The coach of Sarmiento (Argentine Team of A1 League) raised his voice after the twelfth consecutive defeat of Argentina in the last match of the World League against Italy and was eloquent: ‘It’s a difficult moment for everyone. It’s time to build from where we are and don’t make mistakes we made in the past. Even time has passed Argentine volleyball is still sunk in misery, jealousy, selfishness and individual interests’. Rough starting.

The former Weber’s assistantgave a step aside of the National Team and accompanied the campaign from social networks this time. Through all the competition he was very positive and cheered the players to continue increasing their level. At last, when the Final Six had already ended and Argentina was in the eye of hurricane he shot some missiles to somebody over there who take them over. Seems like he was talking very seriously about something that had happened before and didn’t change.No one had courage to respond but everyone wonder who was his target.

The statements of one of the coaches selected to replace Weber in Bolivar when his era had ended didn’t stop there. He continued firing: ‘It’s incredible the capability to destroy; I ask myself until when. I see Julio Lamas and Sergio Hernandez –coaches of Argentine Basketball Team- replacing each other with altruistic reasons. Here I only see misery and more misery. Everything is about waiting and destroying’.The comparison helped to clear up the situation; something was wrong with the technical staff, but the ex-trainer of Scholem and Rosario Sonderdidn’t give names.

He was more upset because of those who make firewood out of the fallen tree than because of the negative run of the Argentine team. Considering he worked with many of nowadays players and staff members, looks like he was close to them in the end of the dream and caught the atmosphere prevailing. Former trainer of Turkish ZiraatBankasi A.S closed wondering what’s next. The same impression many felt after the last match against Italy: ‘I feel anger, how many trains we let go? This team has many boys whom I appreciate, hope somebody think about them’.