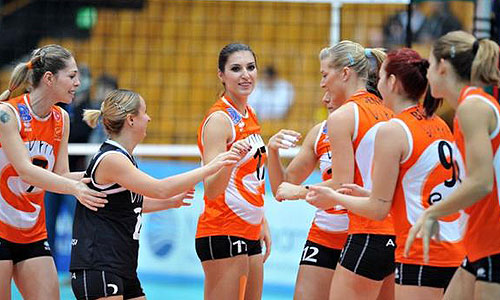 Aroma Turkish Women’s Volleyball League will be played in 4 major cities in 2012-13 season. 12 teams will be representing those cities with 7 teams from Istanbul, 2 from Ankara, 2 from Bursa and 1 from Konya. Play-offsystem will again be in place with the first 8 teams .

Major changes of this year is that TVF has a new president and board members. The target, of this new team led by Ozkan Mutlugil, is to increase numbers of licensed players and enlarge the league with more teams in the future; this action accordingly make teams gain experience by playing more games and this will be reflected to National teams.

Other interesting topic was the triple setter switch from 3 major teams Vakıfbank, Eczacıbaşı & Fenerbahçe. It started with Naz Aydemir; Vakıfbank decided to transfer Naz from Fenerbahçe then Özge would be the second setter in Vakıfbank, although she had a contract in Vakıfbank she moved to Eczacıbaşı because Elif was transferred to Fenerbahçe. Now 3 teams have 3 new setters, will this make an affect, we will see…

Volleycountry.com wishes all teams a succesfull season with no injuries at all.