MCL Pool A: Copra and Tours with full sets of points! 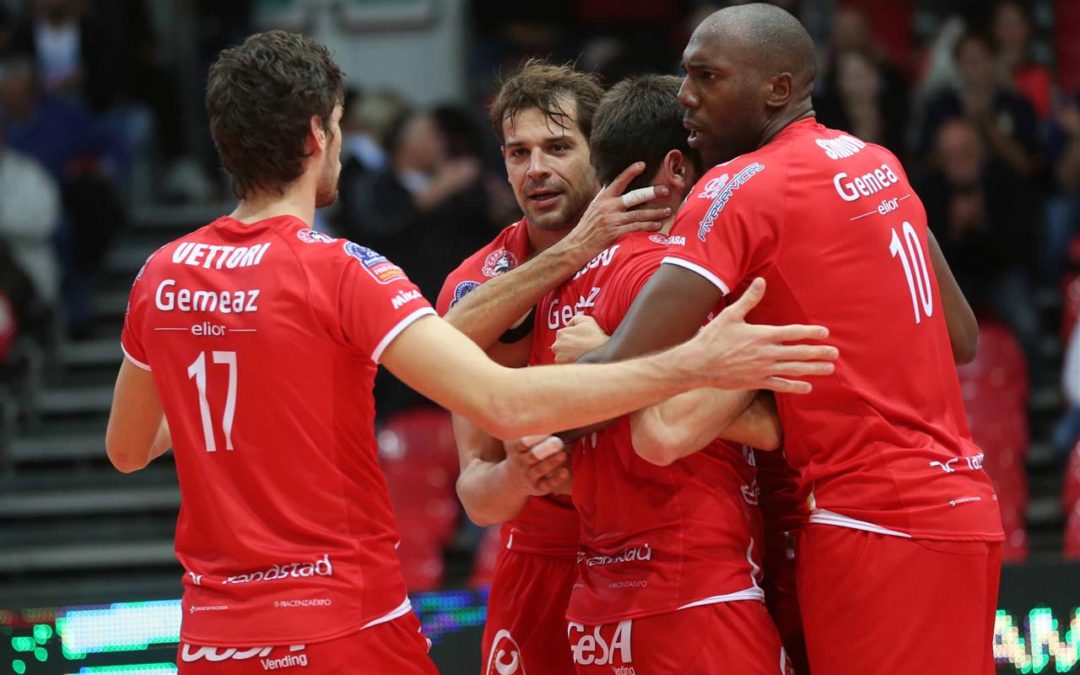 It was a good start for Piacenza that showed its ability to bounce back after losing to Perugia this past weekend in the opening round of the national league. The first set started out with a very close race up to 13 all; with Fei, Zlatanov, Vettori, and Papi the hosts accelerated their pace after the second technical time-out and Alessandro Fei wrapped it up at 25-18.
The second set followed a similar plot; after the score was close up to 13 all, Ljubljana was able to perform really strong and it was Jan Pokersnik who made it 1:1 (24-26) with an ace.
Copra Elior started the third set more determined and with Papi and Vettori on fire, the hosts could comfortably sail to the final 25-14.
The fourth set was more balanced but Piacenza always had a small edge; still Bregant was able to re-open the game clawing back to 18 all before Vettori and 40-year old Samuele Papi took their side by the hand to finish it off at 25-23 for a 3:1 home victory.

“We did not play our best as we still aren’t in our best shape” commented home mentor Luca Monti. “However, we were able to win this game and we are happy with this. We have to work hard but for the time being we want to enjoy this victory”.

“Samuele Papi made our life really difficult but all of their players have a lot of experience” said ACH Volley head coach Luka Slabe. “I am satisfied because my players, though they are young, played well tonight and did so especially in reception. We have to improve our block and this is where Piacenza also made the difference tonight”.

Home mentor Nayden Naydenov said his team is very young and too inexperienced to stand that kind of opponents and so it made a lot of mistakes. On the other hand, TOURS VB head coach Mauricio Paes stressed the importance of this victory for his side.

The start of the match was very close with a neck-to-neck race; Marek Union-Ivkoni got the slimmest margin at the first technical time-out (8:7) after exploiting a serving error by David Smith. However, Tours responded by pocketing three points in a row to turn the tables around (10:8) thereby forcing home coach Nayden Naydenov into a time-out. Tours VB still had a four-point lead at the second technical time-out before Dupnitsa stormed back to provide a very close final rush. However, the Bulgarians paved the way with gold for their opponents as their mistakes significantly helped Tours VB seal the final 25-23.

Tours VB started out strong in the second set (8:5) with Marek Union-Ivkoni still too faulty to keep close contact in the score. After a serving error by home hero Venelin Kadankov, Tours VB called for the second mandatory stop with a comfortable lead (16:12) and easily controlled the game up to the end (25-21).

Marek Union-Ivkoni finally found their way into the game opening set 3 with a 3:0 break to see their opponents’ mentor Mauricio Paes call for a time-out. Dupnitsa was still up by one point at the first technical time-out and the second mandatory stop was called by an ace of home captain Gjorgi Gjorgiev. Though they had set the pace for most of the set, Marek Union-Ivkoni could not capitalize on their lead and right by the time it counted the most, TOURS VB fought back and won the set 25-23 and the game in straight sets.