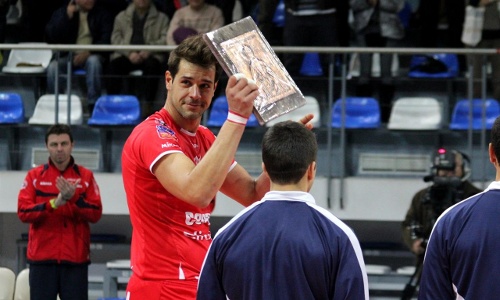 Competiton for 12 places in Play Off stages in Men’s Champions’ League is even more curious than in Women’s. In Pool A situation is still not clear – both Tours and Copra Piacenza have 10 points. Currently both will advance, but lost 2 legs may change everything.

ACH Volley impressed the audience with a very strong start (4:8, 5:10) but finally the home heroes could find their rhythm and started their comeback (10:11). The game continued with teams playing point for point and even though the guests from Slovenia had a slim margin (20:22) by the time the final phases were approaching, still Tours VB could flip the charts around and bring it home at 26-24.

Once more ACH Volley caught a good start in the second set (3:8, 6:10) but similarly to what had happened in the first, Tours VB responded by leveling the score at 14 all. TOURS VB then changed gear and opened a small cushion (20:17) before ACH Volley performed an amazing comeback (21:23) to tie the score in sets (22-25).

Tours VB delighted their home fans with a strong start in the third set (6:2) and this time ACH Volley could not hold the pace imposed by the local heroes (13:9); Tours VB set the pace also at the second technical time-out (16:13) and did not look back to cash the provisional 2:1 (25-21).

Tours VB stretched momentum also to the early phases of the fourth set (3:0) but ACH Volley this time responded quite quickly to make it 5:8 at the first technical time-out. ACH Volley still had to stand the comeback by the hosts who leveled the score at 15 with an ace by their captain David Konecny. The Slovenian guys showed a good performance in defense to get back control of the game (16:19) and call for the tie-break (21-25).

Tours VB caught a flying start there (4:1) and continued to impose their pace also after teams had changed sides of the court (9:6). Tours VB displayed great actions in defense as well as in attack (12:6) to claim their fourth straight victory in the competition (15-7).

“We played a good game but we slowed down in the tie-break and it is a real pity” said ACH Volley head coach Luka Slabe after the game.

“We did not play our best in the opening section of the game but we did so in the tie-break and this is also reflected by the final score” commented home mentor Mauricio Paes.

And indeed Dupnitsa had started the game quite strong exploiting some errors by their rivals to lead the way at the first technical time-out of the opening set (8:6). The home heroes showed great fighting spirit and a very good attitude while Piacenza was still struggling to find their rhythm. The hosts could keep a slim margin also at the second mandatory stop (16:14) as their setter and team captain Gjorgi Gjorgiev continued to change options in attack. However, Piacenza showed their value and experience to fight their way back and edge the young Bulgarians in a very close final section of that set (24-26).

The guests from Italy played their best in the opening of the second set (8:3) and easily controlled the game (16:9); they had reduced their errors to a minimum and the young boys mentored by Nayden Naydenov had to surrender as their opponents cruised to a quite comfortable 25-19 to make it 2:0 in sets.

After losing the first as well as the second set, Dupnitsa looked knocked down and Piacenza stormed out to a terrific 8:2 to set the tone of the game in the third. The fighting spirit and also the enthusiasm that the home guys had showed earlier in the match had almost disappeared. A service error by Mihael Mandzhukov called for the second technical time-out with Piacenza in full control (16:8) and the Italians ultimately wrapped it up at 25-14 to claim their third victory in the competition and cement their second place in Pool A with 10 points.