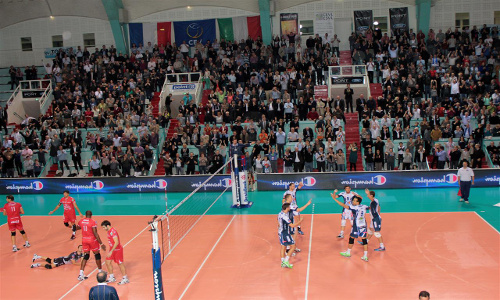 The start of the game was very tight (5:5) but TOURS VB got up by the first technical time-out as they were much helped by their captain and opposite David Konecny (8:5). Copra Elior did not show their best game and TOURS VB could comfortably take the opening set after setting the pace all the way (16:12, 23:18) to the final 25-19.

Copra Elior finally found back their best play in the second set (7:10) but their mistakes paved the way for a strong comeback by Tours VB that drew level at 13 all. The match continued with a neck-to-neck race (18 all) before a couple of good serves by Nuno Pinheiro brought Tours VB to the front (20:18). Tours VB nevertheless could not capitalize on two set balls and they eventually lost the set 27-29.

Tours VB opened the third set with a terrific 10:2 run and even though Piacenza captain Hristo Zlatanov tried to fire up the members of his team, the hosts never looked back and easily brought it home with a terrific 25-13.

Piacenza got back on track in the fourth set (5:7) whereas Tours VB was struggling to display their quality (10:14); the Italians made the difference with their block (19:23) and could eventually call for the tie-break (22-25).

Tours VB returned to perform strong there (5:1) and by exploiting many mistakes made by their opponents moved up 11:7 to complete a memorable volleyball night with a 15-10 tie-break win.

“It was a big match tonight and we can be proud of what we did and achieved this evening” said an enthusiastic head coach of Tours VB, Mauricio Paes.

“We made too many mistakes and we got angry and nervous; we could not find any balance and this defeat does not come as a surprise but we need to do a lot better in the next game” said the head coach of Copra Elior Piacenza Luca Monti.

The Bulgarian team started the match better and went 6:2 ahead as the home team had problems finishing the attacks and made unforced service errors. After the first technical time-out the hosts improved their game and were in the lead for the first time at 10:9. ACH Volley increased its lead to 16:12, but this wasn’t enough to secure the set as the guests bounced back, also via the many mistakes by ACH Volley players. In the end, ACH Volley prevailed and won the set 27-25 through excellent attacking by the best scorer of the match, Andjelko Cuk.
The two teams were tied in the second set as well, all through to the second technical time-out (16:14). After that Marek Union-Ivkoni made more unforced errors, and was able to score only 18 points in the end. ACH Volley’s serving and setting improved and enabled the hosts an easy conclusion of the set.
The home team continued to play good in the third set as well and was up by several points early in the set, 13:5. However, the guests from Bulgaria did not give up and closed to 13:9 before home opposite Andjelko Cuk stepped on the scene and scored several consecutive points for the 16:10 thereby paving the way for the final 25-17.

Andrej Flajs, captain of ACH Volley Ljubljana: “We knew that Marek has a young team and our main goal was to exert pressure with strong serves. We weren’t able to do this in the first set, but got better at it in the next two.”

Nayden Naydenov, head coach of Marek Union-Ivkoni Dupnitsa: “I am not satisfied as we lost 3:0, but I have to congratulate the home team for playing a good match. We had our chance in the first set, but we could not exploit it. The main difference was that ACH Volley didn’t make as many mistakes as we did, they were more organized.”