Men’s CWCH: Trentino starts the cruise for 5th row title with a victory 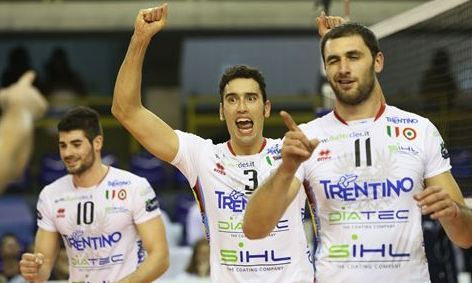 No Juantorena, no Kaziyski, and no Raphael, but the aim is still the same – “To continue the winning streak and to win the Club World Championship 5th time in a row”. This is a delicate plan of brand-new Diatec Trentino on the next six days in Betim, Brazil. One of five steps was already made by the defending champion that overcame Kaleh Sports Club of Iran. In a duel of debutants, the best club of South America, UPCN San Juan, defeated Panasonic Panthers, the wild card beneficiary, with Dante Amaral on the court while bookmaker’s favourite and host of the tournament, Sada Cruzeiro, also achieved a positive inauguration with three-sets win over La Romama (Dominican Republic).

Trentino led 8-4 and 16-11 at the TTO behind some terrific spikes by Tsvetan Sokolov and Filippo Lanza. Two missed attacks by Birarelli narrowed the gap to 17-14. The spike by Alireza Nadi put Kal-Kaleh within one point at 18-17 and the Iranians tied at 20 with Mojtaba Mirzajanpour’s big hit. Javad Hosseinnabadi aced with his serve for the 20-19 advantage. Trentino equalized at 22-all behind the blocking by Matteo Burgsthaler but Kal-Kaleh took the first set 26-24 when Hosseinnabadi landed his spike and Sokolov’s attack sailed out of bounds.

Trentino took an 8-6 advantage in the second set when Ferreira blocked Hosseinnabad and Lanza landed a laser shot from the back court. Two unforced Italian errors evened the score at 9-all and the sides continued tied until the 12-point mark. Then Trentino moved on to sit at 16-14 behind the offense of Ferreira and Sokolov. Trentino won the second set 25-19 when Birarelli sandwiched two spikes around a block against Nadi.

It was a close contest early in the third set with Alexandre Ferreira giving Trentino an 8-7 advantage with his formidable spike. Kal Kaleh tied at 9 when Burgsthaler’s attack went wide. Trentino recovered the lead behind a terrific block by Lanza against Rezha Gara. The Italian widened the distance to 16-13 with Sokolov’s hit off the opponent’s block.The set concluded at 25-19 when Ferreira capped the actions with two straight aces.

Kal-Kaleh was in front 8-7 in the fourth set when Donald Suxho’s serve was just out of bounds. At 10-all Birarelli scored twice but the Iranians came back to take the lead 14-13 benefitting from several unforced Trentino’s errors. The second time out found the Iranian club leading 16-14. Kal Kaleh expanded at 18-15 with the spike by Sajjadi off the Italian block. Trentino closed in at 18-17 with a block by Sokolov against Mirzanapour and tied at 19-all when the spike by Mirzajanpour was too wide. Lanza blocked Hosseinabadi for the lead and the fourth set finished 26-24 with Ferreira’s spike.

In the first set, Tatsuya Fukuzawa broke a tied score at 6-all to give the Panasonic Panthers an early 8-6 advantage. Kenji Shirasawa helped to build a 16-12 difference at the second technical time-out.  The Japanese club continued with a hot streak but Argentina’s UPCN rallied to close in at 23-19 behind the offense of Jose Santos. Finally, Kunihiro Shimizu scored with a big parallel spike and Hideomi Fukatsu blocked Javier Filardi for the 25-20 score.

Fukuzawa broke a tie at 7-all with a fantastic shot in the early stage of the second set. Panasonic went on to build a two-point lead with the cross-court spike by Dante Amaral. UPCN tied at 12 with a beautiful tip by Theo Lopes just on the baseline and were in front 16-14 at the second TTO. Fukuzawa scored twice to even the score at 18-18 but Santos answered back with a laser shot. The Panthers tied at 22 with Shinya Yamazoe and Shimizu producing consecutive kills. Then Lopes scored twice for the 25-23 in favor of UPCN.

Santos led an early rally of UPCN for a 4-0 start in the third. Then Alexandru Olteanu hammered three big kills for an 8-2 cushion. The Argentinean club was in front with a comfortable 9-point lead at the second pause 16-7 following another powerful attack by Santos. Lopes finished the set moving on high gear and UPCN took it 25-14.

UPCN took a one-point lead at the fourth set. They increased the margin to 11-8 with block by Ramos and foot fault by Dante in his killing attempt. The Panthers came back to tie at 13-all when Shimizu blocked Ramos and parlayed spikes with Shirasawa. UPCN led 16-14 at the second pause following the attack by Lopes and the block of Gonzales against Dante. The score tied at 16 with ace by Dante following an opponent’s error. Two attacking mistakes by the Japanese gave UPCN a two-point margin. Olteanu expanded the gap to 21-18. Shimizu attacked to close at 23-22 but Lopes answered back. Shimizu attacked again but Dante crashed his serve for the 25-23.

The home side led 8-4 at the first TTO and the margin widened to 10-4 when the attack by Contreras sailed long and Yoandy Leal blocked Kelvyn Campechano. La Romana cut the gap to 15-12 after the spike by German Recio and the ace by Henry Tapia. A big hit by Souza sent Sada Cruzeiro in front by four at the second TTO. The spike by Contreras finished a long exchange and La Romana closed within two points at 19-17. The second chapter closed with a 25-22 score.

In the third set, Sada Cruzeiro again took an 8-4 advantage. The local boys expanded the gap to 15-9 with consecutive kills by Douglas Cordeiro, Souza and Filipe Ferraz. The second technical time out saw Sada Cruzeiro in front 16-11. When play resumed Cordeiro landed his spike and Ferraz continued with one ace to put the set in the bank at 18-11. Leal closed the match with one ace.