Poland 2014: Backstage of the opening ceremony! 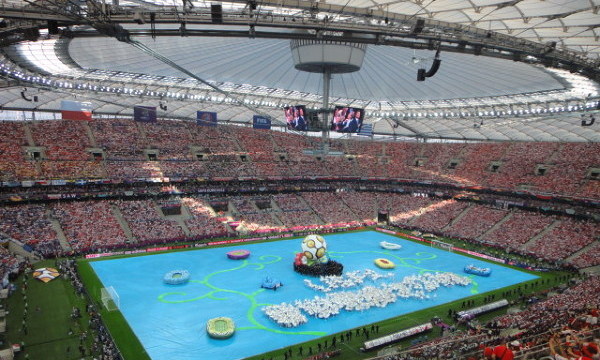 The final countdown has actuated! Hardly 5 days remain to the beginning of the 18th FIVB Volleyball World Championships Poland 2014. On Saturday’s evening, Ary Graca (FIVB President), Bronisław Komorowski (Poland’s President) and some special guest are going to launch the most important competition of the year. It will take place during a special spectacle at the National Stadium in Warsaw. How will the opening event look like? We are raising curtain a bit just now.

A singing duo, Cleo & Donatan, inaugurates the opening ceremony at 6.30 P.M on Saturday, so 95 minutes before the start of the first game between Poland and Serbia. With the sounds of the song “We are Slavic”, well-known from the Eurovision Song Contest 2014 (ranked on 5th place according to fans and televiewers voting), dancers and cheerleaders will move in at the pitch with specially-cut triangles in the national colors to puzzle big sign “Welcome” in the end of the introducing song.

You can “We are Slavic” here.

“We start with Polishness to enhance that this prestigious and important event is held in Poland,” comments a directing stuff member.

Another point of the opening ceremony will be a presentation of participating teams delegation. A banner of these nations will be brought in by women dressed infolk costumes and flags will be presented by men in white. All will be passing off with music composed by one of the most popular DJ in Poland, DJ Adamus.

Next an official speech of Bronislaw Komorowski is scheduled, and then the other part of the art. Dancers will jump out from 6-meter diameter balls in order to build the flag of Poland and FIVB sign.

“We would like spectators to have their hand in this share. Every single fan will find a coloredcardboard on his or her seat and we want them to be raised in the proper moment and then not only there will be created a colorful image, but also the World Championships cup,” a directing stuff member adds.

The last but not least surprise will be Margaret. The Polish vocalist is going to sing the official song of the tournament “Start a fire”. You could listen to the song right here.

And finally, the real struggling will begin. Teams of Poland and Serbia will be invited to play in front of 62.000 of people.

The opening ceremony, besides the very match, is directed by Yorgos Giorgos Stylianou from Greece.

This is the main arena of the performance.