Pool D: A thunderbolt in Lugano 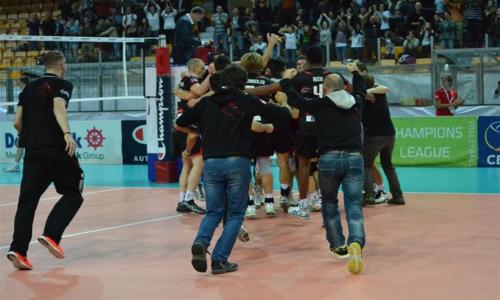 Not only did Energy Investments Lugano make their CEV Champions League debut on Wednesday evening, but they are also the first Swiss male team ever to participate along with the European elite. On the special night the visitors and game favourites Arkas from Izmir left Switzerland with a point due to the tie-break defeat, whereas a day later the reigning Italian champions Diatec Trentino won a hard-fought battle against Berlin Recycling Volleys.

The Swiss side did a pretty good job this summer to make sure the country’s historic participation in Europe’s most prestigious competition would go unnoticed. The Italian head coach Marco Motta has built a good mixture of experience and talent and the first results of his work were seen yesterday. Led by the MVP of the game, the Canadian international Adam Simac, a former Arkas signing, whose 12 stuff blocks, a 2014 CEV DenizBank Champions League first round record, made a difference at the end of the evening, Lugano revealed impressive potential to make the lives of their opponents in Pool D tougher. The Serbian libero Nikola Rosic, the Australian outside attacker Nathan Roberts and the Finnish middle blocker Jukka Lehtonen are well-known names in the world of volleyball, but there are some new ones that we are going to learn in the next months. Two Italians caught the eyes of the specialists with their display against Arkas – the 33-year-old setter Fernando Garnica and the interesting 22-year-old outside attacker Romolo Mariano, who finished the match with 19 points.

On the other side of the field, the Canadian master tactician Glenn Hoag could not use his main attack weapon this season – his countryman Gavin Schmitt. In his absence Arkas looked shaky and if it weren’t for the efforts of another Canadian, John Gordon Perrin, and his 24 points, the Turkish side would have surely returned in Izmir empty-handed. Urpo Sivula doesn’t look reliable at the opposite position and it is obvious Arkas will be strongly dependent on the game of Schmitt. 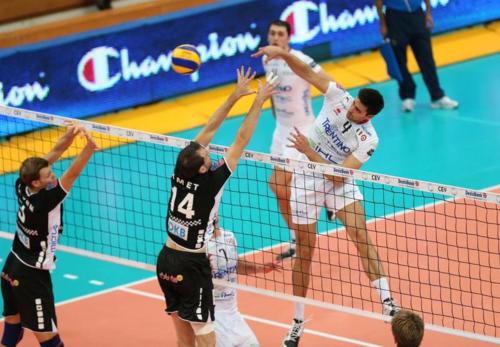 In the derby game of the pool Diatec Trentino, only several days after they claimed the bronze medals at the Club World Championship in Betim, Brazil, had to work a lot to outplay the German champions Berlin Recycling Volleys. Roberto Serniotti‘s lads, unable to show their very best tonight, looked tired after the long travel from Brazil and eventually grabbed all three points from a game that could’ve been much more problematic. Robert Kromm and Paul Carroll took turns in badgering the Italian defence. Michele Fedrizzi and Giacomo Sintini freshened the triple Champions League winners’ game, with Sintini providing an alternative to the veteran Donal Suxho, and with the help of the Club World Championship’s Best Scorer Tsvetan Sokolov managed to clutch the win out of German hands.

Berlin Recycling Volleys enjoyed a great campaign last year when only a few points separated them from a Golden Set clash against the mighty Zenit Kazan. The Bundesliga leaders stunned the current tournament title holders Lokomotiv Novosibirsk, so Trentino will surely have trouble repeating the win in Berlin. A statement also valid for the other two teams that will endeavour to find a place in the Playoffs.