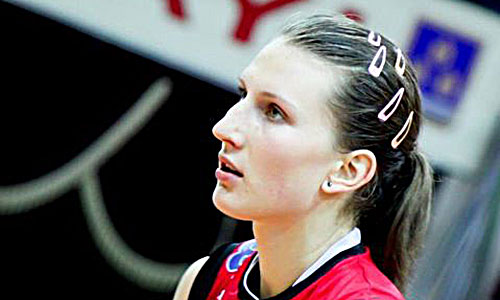 Azerrail-Azeryol 2-3 (22-25, 25-22, 25-22, 16-25, 8-15). The family match between Azerrail and Azeryol goes to the guests. It was a very intense and close battle. Azerrail played like a real team, letting all its players score and giving their best. On the other side Azeryol had to change very often to survive and the deepest roster made the difference.

Coach Vercesi found four aces from the bench: Silié and Rahimova soon and Di Iulio and Jones later crashed the home team. Many up and downs for both the teams. Many digs amazed both liberos. And both oppisites, Gurbanova and Rahimova, rocked the match. Polina Rahimova is definitely the MVP of the match: after she came in she showed how hungry she was, scoring 7 point in half a set, then she took her team on her shoulder in the rest of the match and with some help in the fourth set and an outstanding tie break (5 points) gave the victory to her time.

In the first set Azerrail starts with the usual starting six: Kitipova, Karic, Abdulazimova, Gurbanova, Robles, Rucker and Jeyran Aliyeva as libero of the team. Vercesi gives a chance to Parkhomenko and Matiasovska, with Vargas, Kozuch, Adina Aliyeva, Kovalenko and Thomsen as usual on court. It is soon a close start until the second technical timeout, then Azeryol goes faster: five blocks and Aliyeva unstoppable spikes (7 points in the first set) helps Azeryol to take the set 25-22.

In the second set the match totally changes its face: Azerrail girls, led by team captain Karic and Gurbanova, put the guests far behind. An amazing block and defense system  gives so many troubles to Azeryol. A turned off Kozuch leaves the court, followed by Parkhomenko and Matiasovska; Rahimova, Silié and Di Iulio take their places. Di Iulio helps Aliyeva on the reception line, while Silié and Rahimova duo produces 7 points. Azeryor comes so close, but on the other side the trio Abdulazimova (3 blocks), Karic and Gurbanova did the job. 25-22 for Azerrail.

In the third set another fast start for Azerrail. Rahimova, Silié and Di Iulio start the set from the beginning, but it is not enough. No one can score in their team, just Rahimova has got 6 points, while everyone play amazing for Azerrail. Karic, Gurbanova and Robles keep killing the balls. Vercesi changes Di Iulio for Matiasovska, who becomes soon the target for the opponent service and 2 aces from Gurbanova send her back to bench. Then Jones comes in and something changes: Azeryol can touch more balls on the net, helping an amazing Thomsen to dig everything. Silié finds 3 aces in a row on Karic, but she has a crucial mistake on the 23-22, so Azerrail takes this heartbreaking set 25-22.

Jones takes definitely Kovalenko’s place on court from the fourth set. The block and defense system develops a lot. Azeryol can play much more as a team: Di Iulio has got 5 points, a disappeared Aliyeva shows she’s still there and a still good Rahimova sweeps away a scared Azerrail. Gurbanova is now alone, she scores 7 points, but nobody does the same by her side. Gasimova appears on court for the service ans she finds an ace, giving many other troubles to the opponents, but the key player of this set is Jones, with her 3 blocks and 3 spikes. The American is simply dominant on the net.  25-16 for Azeryol.

Tie break start is again very close. In the first half of the last set Gurbanova, once again, and Karic have 3 points each, breaking the equilibrium, 7-5 for Azerrail. Robles spikes out for the 8-5, and then Silié’s block impacts the set. The Cuban team captain goes to service, scoring 2 aces and giving may troubles to the opponent reception line. Rahimova is outstanding once again with her 5 points, while Aliyeva scores 2 more spikes and Jones has another block. It is an easy 15-8 for Azeryol.